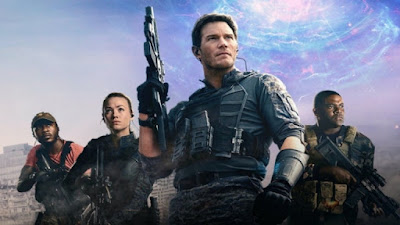 In which we work the Chris Pratt problem.

Despite his fairly low placement in most of the internet’s Best Chris rankings, I’ve always had a soft spot for Chris Pratt. As Parks & Recreation’s lovable doofus Andy Dwyer, Pratt was able to reach something earnest and pure underneath the show’s often acerbic approach to comedy. Andy was the puppy dog: Loyal, undaunted, and shaggy around the edges. When Pratt got shredded to play Peter Quill in Guardians of the Galaxy, there was a fear that the glow-up would make him too self-serious. Instead, he used it to his advantage, playing Quill as the dimwitted jock with daddy issues. Sure, he’s just doing Jack Burton from Big Trouble in Little China, but it worked (and led to Kurt Russell’s eventual casting as said daddy in Vol. 2). These days, though, the Pratt question is more complex. Are we getting goofball slapstick Pratt (The Lego Movie, Onward), or are we getting lifeless mannequin Pratt (Jurassic World, Passengers)? Plenty of actors have this problem, of course, but it’s rare to see a contrast so stark and debilitating as Pratt’s.

So which one do we get in Amazon Prime’s new sci-fi actioner, The Tomorrow War (a title that is somehow both really awful and kind of elegant)? Well, it’s both! Pratt plays Dan Forester, a veteran military commander whose hopes for the quiet suburban life are dashed when a Giant Time Portal opens during a globally-televised soccer match. A group of soldiers emerges from the Giant Time Portal with a grim message: Thirty years in the future, mankind is losing a war against monstrous alien invaders called “white spikes.” With their best resources exhausted, future humans are going to use the Giant Time Portal to bring present humans into the fight. Forester is among those drafted, handed an assault rifle, and sent through the Giant Time Portal* with little hope of survival. When he gets there, however, he discovers that his nine-year-old daughter, Muri (played as an adult by Yvonne Strahovski) is the lead scientist in charge of discovering the white spikes’ weakness. Together, the Foresters fight to preserve their future by changing their past. With, you know, the Giant Time Portal. 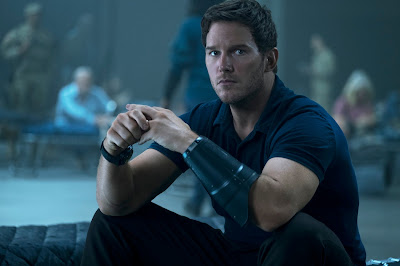 So it’s part Terminator, part Edge of Tomorrow, with a little Aliens thrown in for good measure. The nerds get some time travel science (The Giant Time Portal is static: They can travel from one year to another with no alteration or adjustment), and the gore hounds get some man-eating creatures (The white spikes are the bastard children of the Cloverfield monster and the aliens from Arrival). Forester’s comic relief sidekick is Charlie (Sam Richardson), a bumbling everyman. His frenemy is Dorian (Edwin Hodge), a hardened soldier on his third tour of Giant Time Portal duty. And then there’s Muri, who goes by the codename “Romeo Command” for her first few scenes because the movie wants to play a game where we can’t immediately tell who she is. Zach Dean’s screenplay likes to stretch for time in that way, including an entire first act setting up dots that connect to other dots way later on when a thousand other simple plot contrivances would have done just fine. It adds a few superfluous characters and about fifteen minutes to the proceedings, which gets tedious as we cross over into hour two. 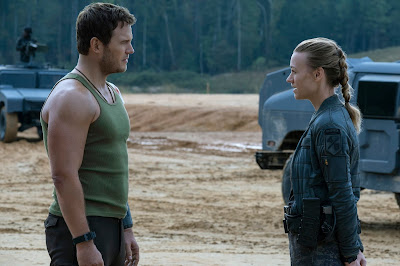 But we were talking about Chris Pratt. Well, he’s good in The Tomorrow War! His Dan Forester strikes a nice balance between Star Lord snark and Whatever They Called His Jurassic World Character steeliness. He’s a soldier and a dad, a caring family man and a bruised veteran. He has an easy chemistry with wife, Emmy (Betty Gilpin) and a combative one with his dad, James (J. K. Simmons, playing one of the aforementioned superfluous characters). Issues arise only when The Tomorrow War tries to do too much, when Pratt is forced to carry the film’s varying tones and diverging plotlines with just a tortured stare or a quick line of exposition. The Tomorrow War has too many ideas and not enough interest in drawing a true thread between them, so don’t be surprised if you fall asleep thirty minutes in and wake up to a scene that feels like it’s from a totally different movie. Fortunately, The Tomorrow War’s last hour doesn’t challenge the intellect all that much. Those looking for a Looper or a Tenet will need to keep looking. 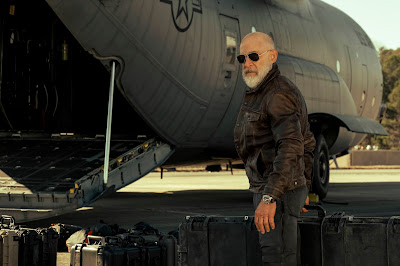 On the other hand, those looking for midline sci-fi programmer on a rainy Sunday afternoon will do just fine with The Tomorrow War. It borrows enough from other time travel adventures to be functional, but it never rises above its premise enough to be too provocative. It dips its toes in and out of so many themes that you probably won’t even notice that most of them aren’t developed in any interesting way. Dan Forester is a Hero Man, and attempts to deepen his pathology — whether it be through revelations made by his adult daughter or confrontations with his absentee father — mostly fall flat. And honestly, that’s not entirely a criticism. The Tomorrow War is just a movie. It’s not an IP. It’s not building a Saga. There’s no post-credit stinger or sequel hook. You will probably forget most of it an hour after it’s over. In fact, the highest compliment I can give The Tomorrow War is that it will make you want to rewatch Edge of Tomorrow. Which you absolutely should do. Edge of Tomorrow fucking rules.
*This part is boring to write. Let me have my fun.
Posted by Patrick Bromley at 5:00 AM