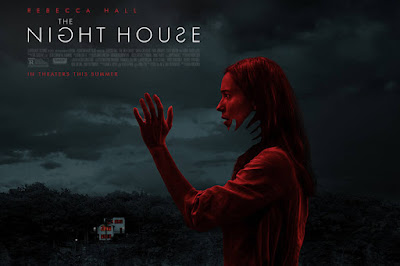 The strangest thing about The Night House is that it’s a mid-budget horror film due for theatrical release by a major studio in this Year of Our Lord 2021. Doesn’t that feel off, for some reason? Though director David Bruckner made a big splash on Netflix with 2017’s The Ritual, it just seems odd. COVID concerns aside, even, our modern landscape seems destined to send movies like this to Shudder or Amazon. But, nope! There’s the “Searchlight Pictures” (blah) logo, right at the start! The studio paid $12 million to acquire the film out of Sundance, and it’s finally coming to theaters this Friday after more than a year on the shelf. Movie theaters. Just like the old days! Maybe I’m fixating too much on this, but I was shocked. And it’s not to say The Night House doesn’t deserve it, either! It does, and we’ll get into that. But it might be a grim commentary on the state of cinema that I was put off by the idea of it dying a slow death next to Shang-Chi and Paw Patrol: The Movie. I suppose the alternative is that it dies a slow death in some obscure corner of Hulu, so I don’t really know what I’m on about. I digress. 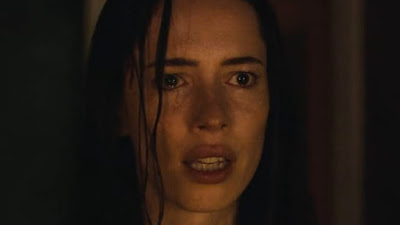 The Night House opens in medias res as Beth (Thundering Badass Rebecca Hall) returns home after her husband’s funeral. As she shuffles in, sympathy casserole in hand, cinematographer Elisha Christian’s camera finds everything she’s been too exhausted to dispose of: Messy tissues. Wine Glasses. Scattered polaroids of the deceased in happier times. It’s an uncomfortable moment, and we’re made to feel uncomfortable sharing it with Beth. More details trickle in over her next few wine-drunk days: Beth is a teacher, Owen (Evan Jonigkeit) built their lake house himself, and he committed suicide with a handgun. He gave no signs of depression (“I’m the one with those feelings,” Beth tells friends later), and he left only a brief note confirming to his spiritually agnostic wife that “there is nothing” after our lives end. Beth’s sadness turns to resignation and then to rage as a search of his personal belongings reveals a strange obsession. The deeper she digs, the more terrifying the truth about her husband becomes.

It reads a bit like a Lifetime thriller, but The Night House is all about atmosphere. Among the many debts it owes to The Shining is its use of what we’ll call “architectural horror”: Backward numbers on clocks suggest a blurred line between dreams and waking hours. Sinister shapes form between household fixtures when approached from just the right angle. Even the architecture of the movie’s editing is unsettling. There are no real monsters or jump scares in The Night House, though, just a sense of creeping dread that Beth’s reality is betraying her, a feeling reinforced by her discovery of the titular night house — a secret property Owen was building in exact inverse design of the one they share. Stranger still are the odd pictures on his phone scattered between everyday snapshots — candid frames of lithe brunette women about Beth’s height and shape, would-be doppelgangers from a distance. What did Owen want with these women? What is the night house for? Will Beth be able to move on without knowing? 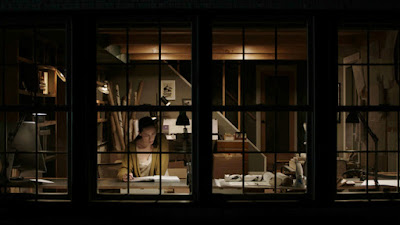 Talented director though David Bruckner may be, his greatest special effect is Rebecca Hall, who delivers a staggering range of performances befitting her status as the aforementioned thundering badass. There’s the Shelly Duvall energy (again, The Shining) of her weaker moments, the gallows humor she indulges in while reading her husband’s suicide note to friends at the bar, and the absolute wrath with which she dresses-down Owen’s supposed mistress, Madelyne (Stacy Martin). Her best moment, though — and this may just be the teacher in me talking — is her confrontation with a fussy parent who insists her son be given an A for a project he didn’t complete. “My husband killed himself with a handgun last Thursday...So, which Hunter got a C on which high school speech elective project doesn’t really matter to me right now.” It’s the best cinematic depiction of empathy fatigue I’ve ever seen. It’s pure. Glorious. Sublime. Rebecca Hall is a stone-cold legend, and I just want to make sure that’s on the record. 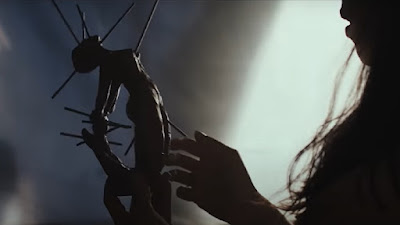 Despite its virtues, however, even the most ardent horror fans will be hard-pressed to pick The Night House out of a lineup in the next few years. It’s too slight to make a real impression, not quite tight enough in its thematics for its ending to land with the intended impact. Still, it’s a powerful metaphor: The specter haunting Beth is more than just her directionless grief; it’s the secrets that poisoned her marriage, the pain of her near-death experience, and the hopeless war her husband waged against forces beyond her control. In those pursuits, The Night House succeeds in spades. It might play best as the early-morning entry in an overnight horror festival, a time when audiences themselves are having a hard time distinguishing between their own dreams and the reality around them. Other than that, though, it’s destined to be an Also Ran next to creepier modern projects like The Invisible Man (2020), It Follows, and The Lighthouse. There’s one thing worth remembering, however: Rebecca Hall rules.
Posted by Patrick Bromley at 5:00 AM