A film that opens with a young man waking up on the side of the road in a heavily-wooded area, walking to a crowded beach, placing rocks in his pockets, and then walking into the water to drown himself will certainly grab your attention from the word “go.” The camera follows him until he's completely submerged, and at the two-minute mark, I already had a chill running up my spine. Apparently The Sender was cut to hell by studio executives who were unhappy with director Roger Christian's original edit of the film, deeming it “too slow and artsy.” After having watched this for the first time, and reading of the executives' idea (have the story be told in flashbacks), I can't imagine this brilliant film any other way. 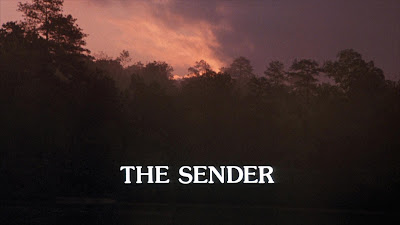 From a script written by Thomas Braun (Carny, a movie that will end up on my discoveries of the year list) based on his childhood with an agoraphobic, overbearing mother, and directed by Christian (Battlefield Earth, don't let that deter you), The Sender is about John Doe, aka The Sender, aka the suicide case from the opening of the film, who ends up in a mental hospital under the care of Dr. Gail Farmer. After some peculiar instances involving a break-in, another patient called “The Messiah,” and violent dreams that seem real but don't really happen. John Doe is played by Zeljko Ivanek in his first movie appearance, a “that guy” actor who you know from dozens of movies and television shows and even made an appearance as the bomb builder in another 52/82 movie, The Soldier. Quite telling of the characters he would go on to portray, Ivanek plays Doe as a mysterious and quiet man with a bit of loose cannon lurking beneath. Kathryn Harrold (Modern Romance) plays Dr. Farmer, a caring – albeit a little too caring – psychiatrist who wants to learn about her new patient. Upon her first meeting with him, she lovingly strokes his face in a character-defining moment, but also an “Ew, what are you doing?” moment. Even when she sees him breaking into her house, she shows not an ounce of fear or anger. Harrold plays Dr. Farmer as an empathetic mother figure to this young man about whom she knows nothing.

As with most movies up to and decades beyond this point, there isn't a single man in The Sender that treats Dr. Farmer with even a tiny bit of respect. If the character had a penis, then apparently he wasn't allowed to believe anything she said. “Why are you getting so upset?” says one of her colleagues. “I'm not upset!” she snaps back. I'll be honest: it got to a point where a man would walk on screen and I'd think to myself, “Well who's this asshole?” So as other doctors, “friends,” and even cops treat Dr. Farmer as a lunatic because of her theories about these visions she's having (far-fetched theories, sure, but c'mon man!), enter Shirley Knight. 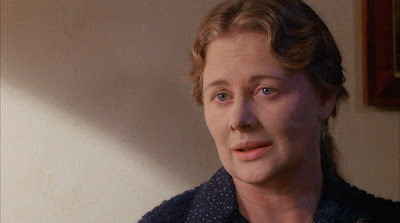 By the time we are graced with Mrs. Knight's presence on screen, these visions Dr. Farmer has been experiencing have gotten crazier and more violent. The patient known as “The Messiah” has now become terrified of John Doe because John Doe has claimed that he is in fact “The Messiah,” born of a virgin mother. During one eerie vision of Dr. Farmer in particular, she's led on chase where she finds John Doe standing on the side of the road. He gets into a truck with license plates that read LUKE131. That's a verse about the birth of Jesus, by the way. At this point, we don't know where we're going. And then we meet John's mother, played by Mrs. Knight, sporting the same hairstyle as Mother from Psycho. She warns Dr. Farmer the her son is dangerous and the best to do would be to simply release him, no questions asked. Dr. Farmer says, well we can't do that. More visions occur. Mirrors break spilling blood from the cracks, a man is decapitated, and Kathryn Harrold proves her bravery and dedication to the craft of acting by walking into a a room filled with hundreds of rats and mice. 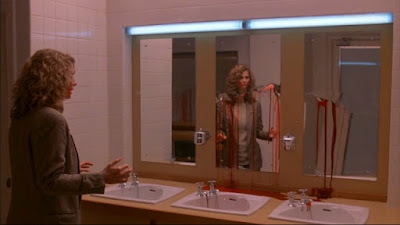 Along with Brian De Palma's The Fury and Chuck Russell's A Nightmare on Elm Street 3: Dream Warriors, The Sender holds its own and would make an excellent addition to your #ScaryMovieMonth viewing. You know what? Include James Wan's Malignant in that list as well and make a mini marathon out of it. Call it, “It's All In Your Head.” You're welcome.
Posted by Patrick Bromley at 12:00 PM