The Frustrating Urgency of DON'T LOOK UP 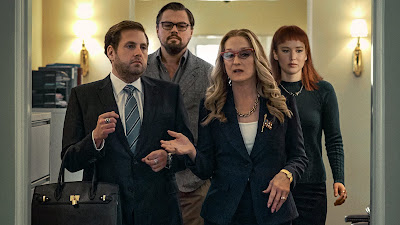 Adam McKay’s latest screed might be more necessary than we think.

As they prepare for their first ever television appearance — on the morning chat show The Daily Rip — astronomers Randall Mindy (Leonardo DiCaprio) and Kate Dibiasky (Jennifer Lawrence) try to shake off their nerves. The nerdy pair are not media personalities, and they never expected to be in this position. Producers encourage them to keep things light and friendly. Make-up artists trim Mindy’s unruly beard. This isn’t the usual mid-morning pablum, though, and Dibiasky mulls over how best to deliver their message with real gravitas. There’s a lot riding on this: They’re about to go live before the American viewing public to explain that a mile-wide comet is on a collision course with the planet. Unless it is diverted in the next six months, it will cause an extinction-level event and wipe out all life on Earth. Catastrophic though that may be, they have to follow pop star Riley Bina (Ariana Grande), who accepted her cheating boyfriend’s marriage proposal during the previous segment. Apocalypse or no, the nebbish scientists will have a hard time following that up.

It does not go well. Dibiasky explodes at the hosts’ indifference to her news, and she’s quickly vilified on social media. U.S. President Janie Orlean (Meryl Streep) is equally disinterested, calling for a “wait and see” approach while she sorts through the fallout of her latest sex scandal. Even NASA — headed-up by an Orlean super-donor — drags its feet on a full-throated acknowledgement of this undeniable reality. Months later, after the comet becomes visible in the sky, populist demagogues instruct their supporters to simply avert their eyes, and an Armageddon-style mission to destroy the comet is aborted when tech billionaire Peter Isherwell (Mark Rylance) discovers that it’s made of valuable mineral ore. How is this possible? How could an advanced civilization be so obtuse? As Mindy and Dibiasky struggle with this existential threat, they realize that there is no hope for Earth. Our global infrastructure has been corrupted by corporate greed, leaving only a noise machine that separates consumers from their common sense as efficiently as possible. 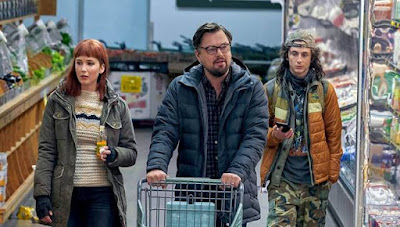 This, writer/director Adam McKay assures us, is revelatory information. Delivered with all the subtlety of a sledgehammer, Don’t Look Up climbs awkwardly onto the shoulders of Sidney Lumet’s Network and Mike Judge’s Idiocracy and declares itself the tallest boy on the team. Its sci-fi premise is laudable, but its self-evident conclusions are reminiscent of Jon Stewart’s Irresistible, another political satire rushing to share urgent insights from the year 1997. McKay seems eager to repeat the formula of The Big Short, but whereas that film used blunt-force black comedy to deconstruct a convoluted real-estate ecosystem, Don’t Look Up is far less astute, eventually collapsing under the weight of countless logical fallacies and strawman arguments. Its targets are buffoonish opportunists with little redeeming value, leaving no opportunity for Network’s textured cultural analysis. It also lacks Idiocracy’s punk rock absurdity, favoring instead an Oscar-worthy sheen appropriate for its A-list cast. Ultimately, Don’t Look Up doesn’t seem to realize that it’s preaching to its own cynical choir.

But just how big is that choir? Are those of us who agree with McKay’s politics but find his methods trite and reductive trapped in the same echo chamber as the red-hatted nitwits and solipsistic influencers peppered throughout Don’t Look Up? Is McKay actually weaponizing Netflix’s home-viewing model, tailoring a generalized message for a generalized audience? Perhaps. But again, no one philosophically opposed to the film’s message is going to be convinced by it. The self-serving politicians and fringe “news” anchors are all coded as conservatives — Jonah Hill’s chief of staff character, in particular, is clearly modeled on the Trump administration’s parade of large adult sons — but the actual GOP voters he demonizes are more likely to see their depiction as another example of liberal media bias than they are to engage in an honest reflection about Don’t Look Up’s allegorical messaging. Liberals, too, might read McKay’s oversimplification as yet another case of anti-intellectualism clouding nuanced issues until they become unrecognizable. 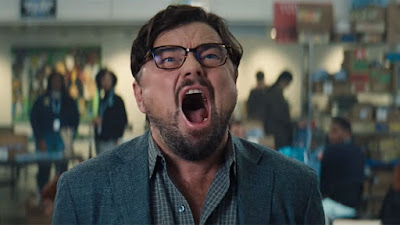 But what does this demonstrate if not the polarization and corruption McKay is outlining here? What is this screenplay if not an almost verbatim record of the actual debates, events, and scandals we’ve lived through in just the last few news cycles? Don’t Look Up’s poster tells us that it is “Based on Truly Possible Events,” and we might ask ourselves if it’s actually reflecting its historical context more effectively than its detractors — myself included — believe. It’s possible that dismissing the film as an uninspired failure of commentary actually betrays a kind of unfounded optimism on our part; We may be giving humanity more credit than it deserves. As the COVID-19 pandemic enters its third year, we see nothing but new examples of a society willing to sacrifice its collective future for its individual comfort, a society in which intellectuals, engineers, historians, and scientists find themselves flailing helplessly against social media algorithms and deeply-entrenched prejudices that actually turn an impending apocalypse into a matter of opinion. 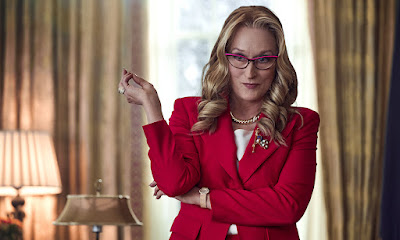 So no, Don’t Look Up is neither a successful allegory nor a particularly funny comedy. It lacks the sardonic wit and snowballing madness of McKay’s better work. It’s dull and tacky and about as insightful as a freshman sociology major. It invites comparisons to great satires like Dr. Strangelove without understanding that Kubrick’s comedy came from interrogating the humanity at the core of the systems he was criticizing. McKay rejects this out of hand, asking veteran actors to play cardboard stereotypes populating a world not worth saving. Don’t Look Up is a padded term paper with narrowed margins, a Wikipedia entry masquerading as a graduate thesis. But these days, that might be enough. It’s entirely possible that coastal elites like myself are missing the obvious: Most people are smug and self-involved. Most people lack the patience and attention span necessary to interrogate society’s ills in any effective way. Most of us aren’t actually worth saving. Maybe we’re worthy of McKay’s scorn and contempt. Maybe I just wish we weren’t.
Posted by Patrick Bromley at 5:00 AM