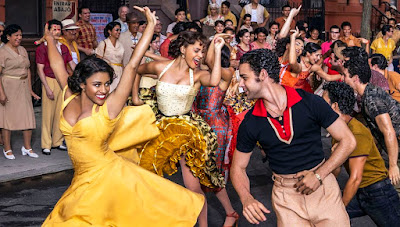 Never before have I struggled with making my "Top Ten (ish) Favorites" list like I did for 2021.
It wasn't that there weren't a lot of great movies ready to choose from -- films I really admired and enjoyed didn't even make my honorable mentions list! -- but instead I think it had much to do with "second year pandemic chaos" which includes starting to get back to pre-pandemic busy work and family schedules while still trying to not catch Covid-19 (so far we've succeeded, but I predict by the time this runs on the site, Omicron will have snuck in somehow) while also dealing with non-pandemic health stress and how it all combines to affect my brain. Some days, it's a relaxed, "It is what it is!" feeling. Most days, it feels like there's a hammer to my head on repeat or my brain is a computer with 201 tabs open and running.

But... the movies were very good. Moving, sentimental, funny, sad, educational, inspiring, weird, violent, soft, and everything in-between. I'm starting to sound like a broken record to some, but stories are important, and art is part of what makes life worth living. The pandemic, I think, has made that all the more clear.

And like the ever-changing CDC guidelines, my list keeps changing depending on the day. Can they all just be ties?

9. & 10. The Last Duel (Ridley Scott) & The Power of the Dog (Jane Campion) - Is this my only tie for the year? It's not even a weird one. It makes sense, right? Both are beautifully shot epic stories about desire, perspective, shame, circumstance, and power. I found myself thinking about these long after I saw them and longing to see them again so I could soak in more of the stories without being happily distracted by the cinematography (for example). Both stories have a lasting impact and leave the audience thinking about them for weeks.

8. Zola (Janicza Bravo) - This "based on a Twitter-thread based on real life" screenplay comes to life because of Bravo's direction and all of the incredible performances. I felt like I was with these characters in the car, in the club, and everywhere else -- for better and for worse! 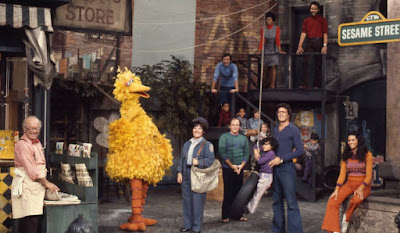 7. Street Gang: How We Got to Sesame Street (Marilyn Agrelo) - I grew up on Sesame Street and love everything Jim Henson, and I love, love, love documentaries in general. That combination made this an essential viewing for me (one which I cried through half the time -- much like when I saw the Mr. Rogers documentary a few years ago). But even without those qualities, I think it should be essential viewing for anyone who cares even a little about humanity and, especially, about the way we commodify children today. They are the collateral damage for "entertainment capitalism," and it doesn't seem to be working very well for them.

6. Barb and Star go to Vista Del Mar (Josh Greenbaum) - Other than Pig, this was the only other early and assured entry to my list this year. Patrick, Adam, and JB recently discussed it on the FTM! Best of the Year show, and everything they said felt like they were in my brain. Give it a listen -- and more importantly, give this film a try if you haven't already! Just go with it. This is what an 'escapist comedy' should feel like.

5. West Side Story (Steven Spielberg) - I don't even know what to say. I really liked it but it wasn't on my top ten. Then my 9-year old wanted to talk about it every day (she LOVED it; I think I was subconsciously too attached to the original), and I started to think about it more and more. A second viewing (my daughter's one winter break wish) made me so happily emotional that I knew it belonged on this list somewhere. It's... wow. Spielberg. Nothing I can say will be better than Spike Lee's Instagram review (Google it if you missed it), but the colors and the blocking and the cinematography and the performances and the choreography and the editorial choices and the NYC and the Rita Moreno and the Sondheim and the Shakespeare and all the emotions... makes me wish I had time to watch every movie twice in one month, though they certainly all would not affect me the way WSS did. (Personal note: The FTM! EIC and I met in 1997 while both performing in a suburban Chicago community theater production of West Side Story; I played Riff's girlfriend. Our first real conversation took place during dress rehearsal week when another cast member who knew that we both [separately] loved movies dragged me over to him to announce to us both that famous Chicago film critic Dann Gire was in the theater picking up his daughter [who was in the show with us]. The cast member said, "You both said you 'read Dann Gire religiously'; he's in the building!" [Or something close to that.] A friendship between two movie-lovers was born.) 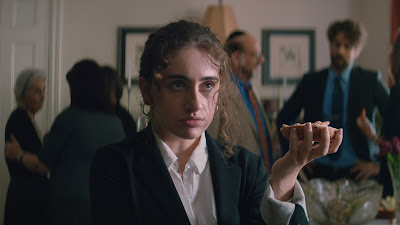 4. Shiva Baby (Emma Seligman) - This movie is so sharp in its observations while being astutely funny and weighty at the same time. I love it.

3. Licorice Pizza (Paul Thomas Anderson) - It's the music and the performances and every sunny strand of story that Paul Thomas Anderson creates on screen. Something about his work has always just resonated with me (much like Spike Lee's). I have a strong personal reaction to most things NYC/East Coast, but Anderson's '70s Valley Stories make me want to go to there. (We are all still quoting Liz Lemon, right?) 1. Pig (Michael Sarnoski) - The only movie on this list that earned its spot after the first viewing and never moved. I wish more people would see it.

Note: Does Bo Burhnam's Inside count as a film for 2021? Or just a comedy special? Or something else? It belongs in its own category, really, and it's 1-10 for whatever list that is.
Posted by Patrick Bromley at 12:00 PM