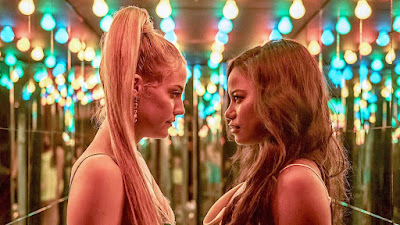 If you feel like 2021 was hard (and you were always tired and everything hurt and nothing made sense and you were constantly questioning reality and your place in it), good news! You are not alone. Everyone felt that way. I certainly felt that way, but think I know the reason:

I did not see enough movies.

I love the movies. I often think about what an incredible miracle it is that the film I’m about to enjoy even managed to get made in a world that seems so goddamned close to ending itself with every war-fueled wobble around its axis. But whatever: it did and I’m here. And that makes me feel a little better.

Coming up with a “Top 10” or “Best Moments” list for 2021 was impossible, because I didn’t see enough to make those judgements—and also because I was so constantly desperate for movie-comfort during every moment of this difficult year that I kind of loved everything. Still, a few particularly heart-exploding moments stood out for me.

Valentina Sings About the Shitty World, West Side Story 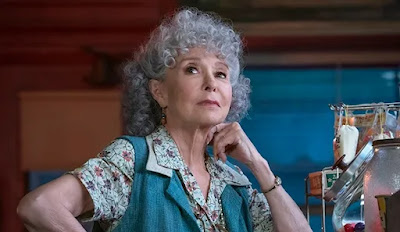 Trying to process death and grief, Valentina sits alone in her darkened shop and sings (To herself? To us? To no one?) that there’s a better place than this and a better time than now. At the showing I attended, the lush orchestral score and Rita Moreno’s heart-wrenching sincerity brought everyone to tears. Which world was she singing about: hers or ours? Valentina and her American story serve as a bridge between two worlds in West Side Story, and that extends to the bridge the movie creates between past and present, between the screen world and the world waiting for the audience beyond the theater doors. Moreno herself is a literal link between the 1961 and 2021 films, a physical reminder of the 60 years that have passed and all that has and has not changed. This movie is about whether our barriers are permeable, and the risks we take when we try to connect across them; Valentina reminded me that, at their best, all movies are about that.

It’s Time to Die, No Time To Die 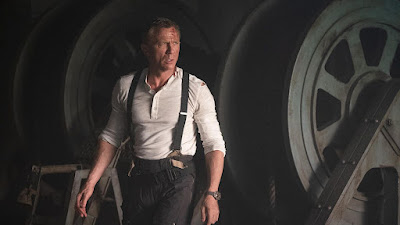 I didn’t grow up on Bond films like my husband, or playing GoldenEye like my son, so Daniel Craig is my favorite Bond, and I don’t care what you think about that. Unless you agree, in which case, I DO care! Because I love being right (just ask JB.) If you don’t know who dies in No Time to Die, STOP READING NOW (I MEAN IT. STOP READING NOW) because it’s James Bond and for fuck’s sake, I hope you stopped reading. And I was more than okay with it because of my love for Craig’s take on Bond, not in spite of it. Craig’s Bond always seemed more human to me that the campy, quippier versions of the past. Yes, his Aston Martin is armored… but is that as impenetrable as his EMOTIONAL armor? Are Q’s weapons as powerful as James’s other weapons of “not trusting people” and “self-recrimination” and “looking hot while brooding”? For 25 films we have watched (well not ME, but some of us—again, I’m not a huge fan of the franchise as a whole, I mean it’s fine) James Bond narrowly escape death because he apparently wants to live, but… why? What gives Connery’s Bond hope—his next conquest? What makes Moore’s or Brosnan’s or even Lazenby’s Bond cling desperately to life through incredibly dangerous odds—their devotion to the Queen? She’s not even IN THE MOVIES.

This Bond, in this movie, finally has a family he wants to live for—and is willing to die for—not by accident, but by choice. Craig’s performance as a man who realizes he has that choice, and then makes that choice, made me feel more human. That’s the best any movie can hope to do. Oh, and Felix dies and Blofeld dies and FUCK IT-- I really hope you didn’t read that if you haven’t seen this movie.

Phil Bathes with a Handkerchief, Power of the Dog 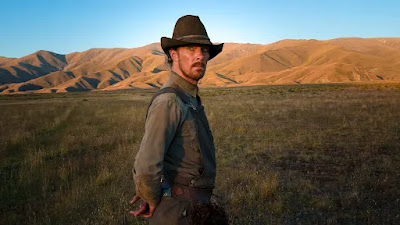 Something I love about this movie is the way each element supports its themes of control, repression, and social expectation, from Jonny Greenwood’s sharp score to the slow camera movements and shifting perspectives of near and far, light and shadow. This movie teaches us to hate and fear Benedict Cumberbatch’s monstrous Phil Burbank from the moment we meet him bullying his gentler brother George. Later, bound to the camera’s eye, we follow Peter through the brambles to discover Phil literally and figuratively naked, reveling in the intimate pleasure he receives from Bronco Henry’s worn kerchief and the memory of their relationship. The revelation makes Phil seem more human but also that much more dangerous: we see what he was hiding, we understand why, and we feel viscerally all he would do to protect his secret because we are human too. Phil and Peter’s relationship, and their eventual fates, seem both shockingly unexpected and unavoidable—the final element of the film’s exploration of its themes. Every taut frame makes me fucking grateful that cinema exists. 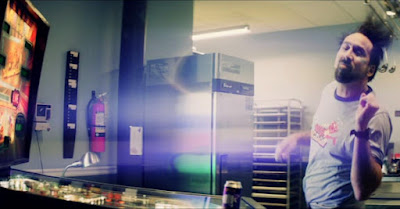 Remember at the end of the Twilight Zone episode “The Monsters are Due on Maple Street” when we hear voiceover of the aliens who orchestrated the whole thing? What a couple of assbags, right? Sometimes I feel like they’re STILL UP THERE, laying weird bar bets about what they can or can’t get humans to do. Like eating blowfish liver: “What if it’s poisonous?” “THEY’LL EAT IT!”

And then one day one of those aliens said, “Yeah, Nicolas Cage is great, but what if he never talked?” and the other alien said, “STILL GREAT” and the first alien said, “PROVE IT” and they made Willy’s Wonderland.

I absolutely love the questions that this film presents us with—questions like “What?” and “How?” and “Why?” and “Huh?” WHO CARES? This is not a movie about explaining the ancient lore of satanic ritual, or why a knight, a weasel, and a sexy siren would sell pizza. Willy’s Wonderland is frenetically violent and gloriously bloody; it wastes no time and suffers no fools or their foolish questions—especially about the Janitor, about whom VERY little is explained. And then… he takes a break to play pinball and dance. He’s flipping the flips and shaking his hips, and I feel a pure kind of joy that only comes when you can say to a movie, “I accept your mysteries and give myself to you.” It’s the purest form of love between people and people, and between people and movies, and I am here for it.

Jack and Sandie (and Ellie) Dance, One Night in Soho 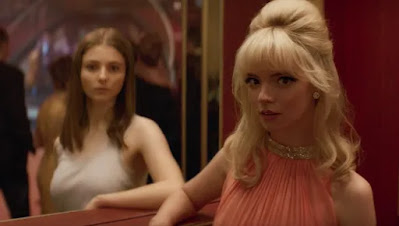 In one of the movie’s most memorable sequences, Ellie and Sandie slip into and out of each other while dancing with a handsome Jack at the Café de Paris. Director Edgar Wright used doubles, sliding mirrors, meticulous choreography, and a Steadicam operator who deserves a special Oscar to realize this amazing unbroken shot. Both the set direction and costumes are gloriously realized, and we believe the exciting, vibrant world that Ellie steps into partly because the lights and people and the street itself are real. The practical magic creates an emotional magic that draws us into the women’s opposing obsessions: Ellie’s with a stranger’s past, and Sandie’s with her own future. This is the moment where those desires intersect, as both women stand on the outside of what they want but can feel it approaching, both still thinking they can control what happens next. Subconsciously, our brains recognize that something is off, but we’re drawn forward by the movement, the music, the vivid detail… just as Ellie and Sandie are drawn forward and must feel, in some subconscious place, that things may not turn out the way they want.

Rob explains why he went looking for his pig, Pig 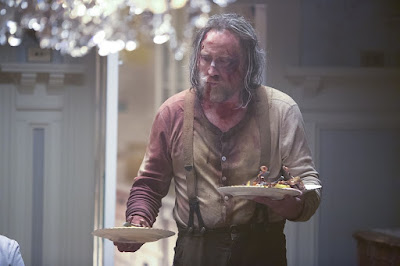 I’m excited that Nic Cage shows up twice on my list, and I’m excited that 2021 was the year where he thought to himself, “Maybe it’s enough if I just act the shit out of every scene instead of TALKING all the time.” Like the Janitor, Pig’s Robin Feld is a man of action, not words.

I’ve saved this moment for last because it may be my single favorite moment in any movie I saw during 2021. I won’t say much about it because nothing I write here can explain the place in my heart for movies any better than watching Pig can—so if you have not yet seen it, please do that.

I don’t know what happened to Nic Cage to make him so transcendently good at playing a man drowning in grief, but I guess we don’t get to choose our superpowers. I do know that we watch Rob walk through nine circles of hell in search of his pig, and we think we know exactly why, but when he finally says it out loud it’s surprising and revelatory and not what we expect, and it broke my heart open. I’m not going to write it here, because on paper it sounds trite; if you know, you know. Rob’s “reason” is our only hope on this or any other lonely planet, if you ask me, and I love when a movie helps me remember that.

Here are a few other things I loved about some movies I saw in 2021. Feel free to tell me the ones I missed in the comments! I’ve given you enough to round out a baker’s dozen:

Ghostbusters Afterlife: Nerdy, awkward girl feels connected to her dead relative? IT ME.

Zola: Women need to affirm the worth of other women. I’m not joking.

The Last Duel: Women also need to affirm their own worth. I’m fucking serious.

The Mitchells vs. The Machines: For letting a dog wear a tuxedo “like a little gentleman.”