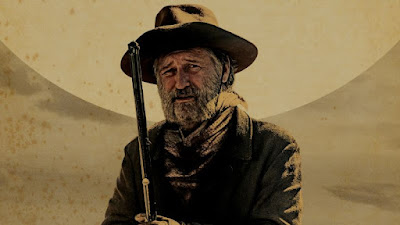 More from one of my favorite actors!

Back in 2020, I programmed a 24 hour marathon of Bill Pullman movies because he's one of my very favorite actors and I don't feel like he gets enough credit for being as great as he is. I said at the time that I would someday revisit his filmography to do a second marathon. That day has come. 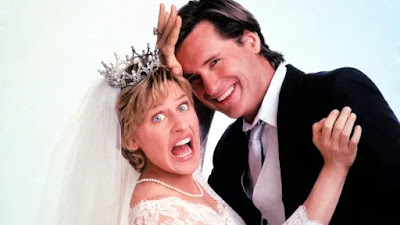 Listen. LISTEN. The truth is that I used up most of the good Bill Pullman movies the first time around, leaving me a bunch of interesting failures to program like this romantic comedy which casts Pullman opposite Ellen DeGeneres in her only real outing as the lead of a movie. He plays the perfect guy who reveals himself to be an awful disaster as soon as she tells him she wants him to "be himself." The movie is a weird mix of tones; it seems to want to go very dark, but then pulls back to sitcom safety time and again. DeGeneres is miscast mostly because she's just required to react and not to be funny, but thankfully Pullman is weird and wonderful in what sometimes feels like his warmup to Daryl Zero. That Mr. Wrong is directed by The Shape himself, Nick Castle, makes it a curiosity for a certain kind of movie fan. I am that kind of movie fan.
12 pm - The Accidental Tourist (1988, dir. Lawrence Kasdan) 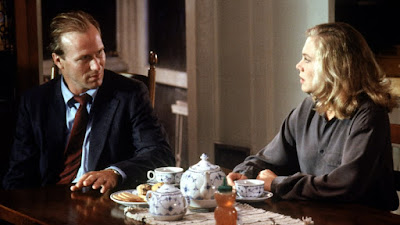 I'm a big fan of this Lawrence Kasdan dramedy about a travel book writer (RIP William Hurt, who also sucked) who loses his son and gets divorced and meets a Manic Pixie Dream Geena Davis who forces him out of his shell. Pullman plays the nerdy editor who falls in love with Hurt's sister in one of the movie's best subplots. There's not enough of him here, to be honest; I could use a little more Pullman and a little less Hurt, but that's me. Actually, in another world, the William Hurt role is the exact kind of part that Pullman would fucking crush. 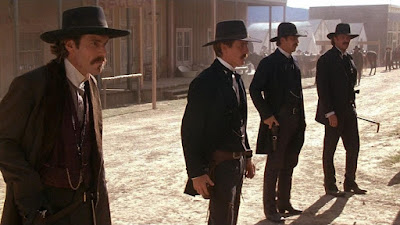 I like the idea of doing a little director double feature inside of our 24-hour marathon, so I'm following one Lawrence Kasdan movie with another. I also like that Kasdan brought Pullman back from The Accidental Tourist just a few years later for Wyatt Earp, his underrated western that was and remains completely overshadowed by the fact that Tombstone came out just six months prior. Long and episodic, Kasdan's movie is less consistently entertaining than the highlight reel that is Tombstone, but it's also a deeper examination of the complicated and difficult title character (this was during the period when Kevin Costner never backed away from difficult -- and often unlikable -- characters). Bill Pullman plays the doomed Ed Masterson, one of Earp's deputies during his early days in Dodge City. He doesn't make a huge impression, but then the cast is so star-studded that no one save for Costner (and maybe Dennis Quaid's Doc Holliday) gets a ton of screen time.
5:15 pm - Lucky Numbers (2000, dir. Nora Ephron) 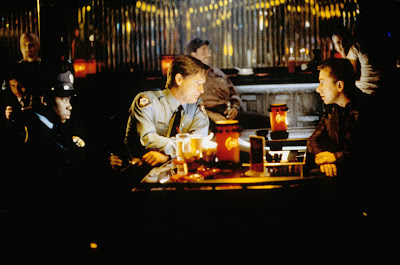 A frustrating movie about a lottery scam being run by a TV weatherman (a woefully miscast John Travolta) and his girlfriend (Lisa Kudrow) alongside an all-star cast that includes Tim Roth, Ed O'Neill, Michael Rapaport, Maria Bamford, and Michael Moore in maybe his only acting role. Stealing the entire film is Bill Pullman as a cop who would rather do anything than his job. He's in a much funnier movie than this one, which winds up being totally confused and messy. Director Nora Ephron didn't write the script and it shows (it was written by Adam Resnick, a good writer whose sensibilities don't totally line up with Ephron) as I'm not sure how well suited she is for the kind of pitch-black humor for which this is going. I'm programming it early because it takes Pullman a full hour to show up; once he does, he makes it worth the wait.
7 pm - Sleepless in Seattle (1993, dir. Nora Ephron) 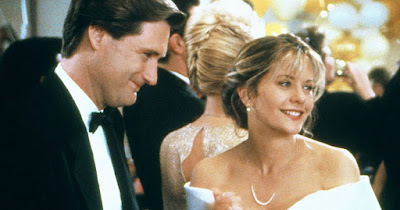 While he's not one of the two leads in Sleepless in Seattle, the movie deserves the primetime slot for the pairing to Tom Hanks and Meg Ryan (reuniting after the great Joe Versus the Volcano, a movie most people didn't know existed at the time) and for making Nora Ephron a household name as a filmmaker. Bill Pullman is the Ralph Bellamy in this one, playing an exceedingly nice guy who just happens to be allergic to everything. He's great in the part, one which I suspect helped raise his profile and made some of his lead roles in the '90s (like While You Were Sleeping and Independence Day) possible.
9 pm - The Ballad of Lefty Brown (2017, dir. Jared Moshe) 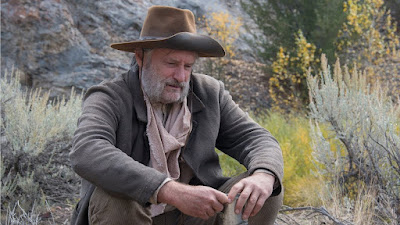 Bill Pullman has never wanted for work, but in a more just world his performance in The Ballad of Lefty Brown would have led to a Tarantinoesque career rebirth. He plays Peter Fonda's lifelong sidekick who has to become the main character of the story after tragedy strikes. This is a gorgeous, excellent western that deserves way more attention than it ever got (it grossed less than $10,000), with Pullman giving a Top 3 performance (the other two being Zero Effect and his work on USA's The Sinner). I'm programming it in the primetime slot because it deserves to be here, and who's going to help these great Bill Pullman movies get seen if not me?
11 pm - The Favor (1994, dir. Donald Petrie) 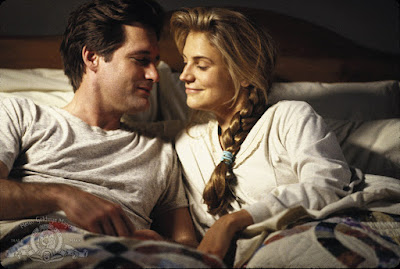 As things get late, let's settle into some comfortable and easy romantic comedy -- the kind where we can fall asleep for a few minutes and not fall too far behind the plot. The perpetually undervalued Harley Jane Kozak plays a somewhat frustrated housewife who asks her best friend (Elizabeth McGovern) to look up an old flame (Ken Wahl), leading to the usual farce of jealousy and misunderstandings. Pullman plays Kozak's husband, a genuinely good guy forced to bear witness to the strange behavior of romcom characters. Brad Pitt also has an early role as McGovern's artist boyfriend. This was shot in 1990 but got caught up in Orion's bankruptcy and wouldn't be released for another four years; by then, Pullman and Pitt's stars had risen and the others had fallen somewhat, meaning the movie got more or less lost. It deserves better.
1 am - Surveillance (2008, dir. Jennifer Lynch) 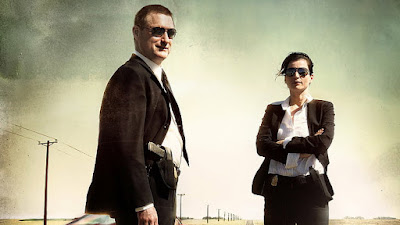 I used up most of Bill Pullman's horror movies on my first marathon, leaving only this dark thriller from director Jennifer Lynch to program this time around. He and Julia Ormond play a pair of FBI agents investigating an accident/murder that left only three witnesses: a drug addict, a little girl, and a cop. The less said about this one, the better, but director (and co-writer) Lynch isn't afraid to get really dark and nasty, with Pullman playing against his usual nice guy type in a big way. This is a good movie that will play well in this time slot. It's a shame we don't have more like it this time around.
3 am - Nervous Ticks (1993, dir. Rocky Lang) 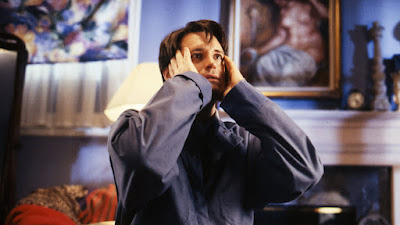 A comedy well-suited for the overnight slot, Nervous Ticks features Pullman in a leading role as York Daley, an airline employee planning to run off with a married woman (MTV's Julie Brown [the redhead one, not the Downtown one]). Things get complicated when he comes into possession of a briefcase that some bad people want and when Julie Brown's husband (Peter Boyle) begins to suspect what's going on. Nervous Ticks pushes a little to hard to be wacky (in particular the score), but it's essentially Bill Pullman's After Hours and I don't know how to sell it any harder than that. 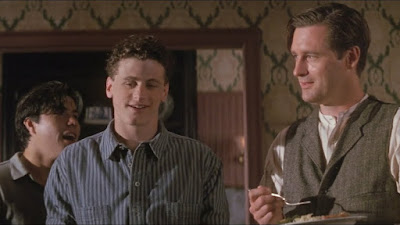 Let's wake up with a song! Bill Pullman isn't in this Disney musical very much, but his role is an important one and capitalizes on the inherent decency he so often brings to his performances. Plus, we get to hear him sing! It's worth programming just for this reason alone. 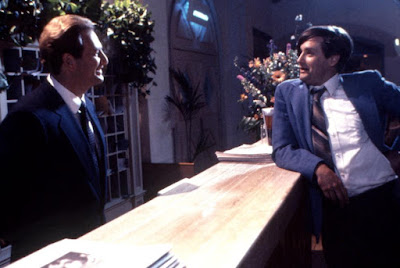 Carl Reiner's star-studded 1990 comedy doesn't totally work, but that's not the fault of Bill Pullman, who once again steals the show as a fuckup blinds salesman who gets caught up in an accidental death alongside Kirstie Alley. Constantly slicking down his pseudo-combover and fidgeting with nervous energy, Pullman finds a funny character to play where most of the rest of the cast does not. It's the kind of comedy that demands little from the viewer, meaning it will go down easy after an entire day and night of watching movies. 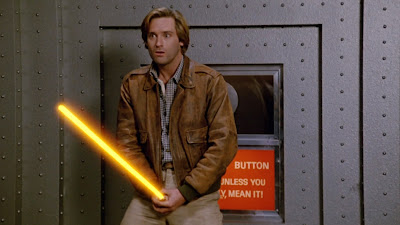 We'll close things out with this one, an early lead role for Bill Pullman and one that helped make him a star. I like the idea of following a Carl Reiner with a Mel Brooks, seeing as they were best friends for so many years. Truth be told, I'm not a big Spaceballs guy, but I can't deny its importance in giving my man such an important showcase early in his career. Mel Brooks took a chance on a mostly-unknown actor (he had really only done Ruthless People prior to this) and made him a movie star. For that, me and all my other Pullmaniacs will be forever grateful.