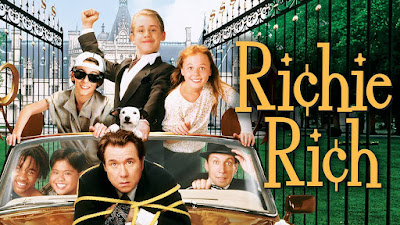 The President of Kids finishes his term in office.

We didn’t know it at the time, but 1994 was the end of the road for Macaulay Culkin as a movie star. I think most of us knew he had outgrown being a child star by 1994 (with his final run being that year’s Getting Even with Dad, The Pagemaster, and Richie Rich), but I think most of us assumed he would transition into being a teen actor. It’s not hard to imagine him showing up in 10 Things I Hate About You, Varsity Blues, or even a Scream movie. Instead, Culkin took nine years off before coming back on the scene with his next project, the 2003 indie flick Party Monster. It was great to have him back, but it seemed like after that film and 2004’s Saved! that he didn’t feel the need to reclaim back his A-lister status. Mac had dropped the mic in the film world, only returning for a sporadic curiosity. You were more likely to see him on a pop culture-related YouTube show (like Red Letter Media or Angry Video Game Nerd) than on the silver screen.

I’ve always been a huge fan of Macaulay Culkin even as I’ve gotten older. I’m a little protective of him in a way that I’m not normally with other celebrities. I’m not sure exactly why. Maybe it’s because he and I were close to the same age and he was living out the most outsized level of fame a kid of that time could have. Maybe it’s because we all knew through tabloids about how complicated his private life was. Maybe it’s that he seemed at once naively natural on-screen while also hugely charismatic. I think it’s a combination of all those factors. Only as an adult have I realized how interesting he was with his film choices between 1989 and 1994. It’s difficult to parse where the credit should go. I’ve heard his parents (who by most accounts were controlling) largely guided the projects he made, but I’d like to think Macaulay Culkin had some element of “one for them, one for me” in him, because why else would he have taken such adventurous projects like My Girl (where the most popular child actor in the world dies at the end) or The Good Son (where the most popular child actor in the world tries on The Omen for his target audience that are arguably too young for The Omen)? It’s a fascinating stretch of a career especially for a young actor. 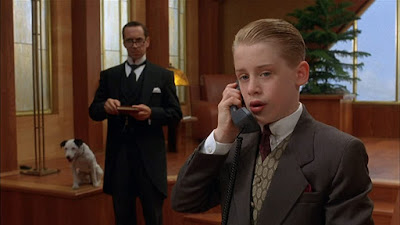 Richie Rich feels like a conventional choice for a child actor and one last gasp of one who knows they can’t play a kid on screen for much longer. But like most things over time, what once felt long-in-the-tooth in 1994 now feels shockingly good through the lens of nostalgia. This was my first revisit of Richie Rich in at least 20 years, and I was stunned how much it feels like cinema compared to most movies nowadays. There are stakes, danger, themes, character development, noticeable 1st/2nd/3rd acts. Richie Rich has everything it needs. There’s a moment in the finale where the villain (played by John Laroquette, who as 2020 kids would say “understood the assignment”) shoots Richie point blank in the chest three times (he’s wearing a vest). What movie in 2022 (kids or otherwise) would have the balls to do that? Maybe X. Go see X, everyone.

Richie Rich does another thing movies these days don’t do enough: its mission is to be fun. Richie Rich gets in, does the job and banks on you liking the movie for it to get a sequel. It wasn’t a given and in fact the movie didn’t get a theatrical sequel (it did get a direct-to-video Christmas sequel in the late-'90s but with a new cast). Richie Rich is a handsomely made production, directed with tons of energy by Grumpy Old Men’s Donald Petrie, produced by action titan Joel Silver, shot by Don Burgess (Forrest Gump) and scored by another Robert Zemeckis staple, composer Alan Silvestri. The movie was also filmed partially on location in Chicago and if there’s anything that’s aged well in my eyes these days it’s movies from the early '90s shot in Chicago. I miss movies shooting on location as opposed to warehouses with greenscreens for simple things like talking in rooms or being outside somewhere. The supporting cast of the film is aces, too, with Edward Herrmann and Christine Ebersole having a blast playing Richie’s parents, Richard and Regina Rich. But the ace in the pocket of Richie Rich is Jonathan Hyde. Hyde steals every scene he’s in as Richie’s butler and confidant Herbert Arthur Runcible Cadbury. This is top-flight work, and it launched a character actor hyperdrive for Hyde that he rode for the rest of the ‘90s in films like Jumanji, Titanic, Anaconda and The Mummy (1999). Every ‘90s Kid knows (and probably likes) Jonathan Hyde. 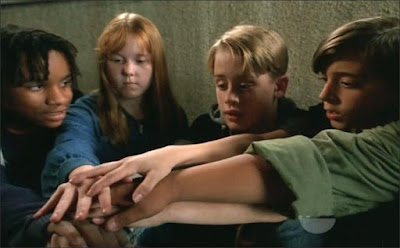 But when it’s all said and done, it’s not the “You have your own McDonalds” moment or the Reggie Jackson/Claudia Schiffer cameos that make Richie Rich ‘90s Kids Movie Club gold. It’s our main man Mac. It could have been so easy for Culkin to play Richie as Kevin McAllister or some hyper/obnoxious mop top, but he doesn’t and leans into the sadness inherit of being the richest kid in the world and (as a performer) gives his supporting cast tons of room to shine. He’s a humble, empathetic dude (e.g. Richie convinces the board of directors to take pay cuts instead of laying off the company’s workers) that just wants some friends. How can you not root for someone like that on screen and off?

P.S. Richie Rich features one of my favorite ‘90s Kids Movie Club tropes: the family fortune being hidden in a vault. Remember when every kids’ movie had this scenario?
Posted by Patrick Bromley at 5:00 AM