It Came from the '80s: HEAVY METAL 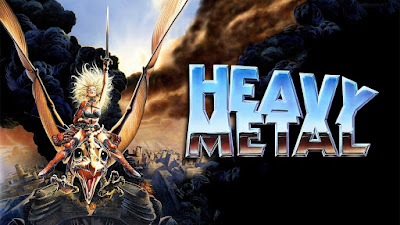 Ok, that's kind of a joke. But only kind of. The 1981 Canadian film Heavy Metal, based on the cult magazine of the late 1970s, exists largely in the public memory these days as the rare R-rated animated feature -- an excuse to show cartoon boobs. It is adolescent fantasy on a grand scale, in which even the nerdiest teen can become a muscular hero who kills monsters and beds not one but two buxom beauties in the same day. It's loud music and violence, the stuff every basement-dwelling, D&D playing kid dreamed of in the 1980s. It's the rare movie that makes good not just on its title, but on its cool poster, too. It's a film that could only exist in the '80s.

This was something of a holy grail movie for me growing up. It was unavailable commercially for a number of years, I'm assuming because of all the music licensing. My older brother and his friends -- exactly the kind of role-playing metalheads from whom the movie was designed -- had a bootleg copy one of them had obtained at a con that they would pass around, which is how I first saw it. The questionable legality of the VHS, coupled with the film's R-rated content, made it feel like forbidden fruit to little kid me. A few years later I was able to secure my own copy when I recorded a double feature of Heavy Metal and the Monkees' Head (neither available on VHS at the time) overnight on TNT, and that VHS became one of my most prized possessions. Then, in high school, an amazing thing happened: there was a Heavy Metal resurgence, with the film not only finally getting a home video release, but a theatrical re-release as well. I was able to see at Chicago's now-defunct McClurg Court, at that time one of the biggest and best-sounding screens in the entire city. It remains one of my favorite theatrical screenings of my life. 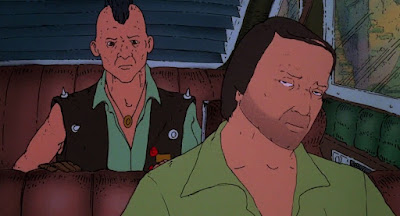 It's difficult to believe the film was so hard to come by for so many years nowadays, as it's been released on pretty much every format since and I've owned them all: first the VHS, then laserdisc, then DVD, then Blu-ray, and now on the recently-released 4K disc. Revisiting it in this newest iteration -- the best it has every looked and sounded since that screening at McClurg Court -- opened my eyes to something I didn't quite realize: Heavy Metal is Pure Cinema and I love it. I mean, I've always known that I liked it, but I always assumed it was a combination of nostalgia and the forbidden nature of it all. I thought it treated me like a "grownup" because it showed me things only grown ups were supposed to see. As a kid, I didn't realize how juvenile it all really is. I say this not as a criticism, but merely as an observation. If you're on board for what the movie offers -- and I understand if you're not -- it's admirable just how much it leans into the stuff that gives it its reputation.

The director Adam Green is fond of saying that movies are "picture and sound." What he's referring to specifically is when people think they know how to watch rough cuts of movies but can't because the picture and/or the sound are unfinished. Yes, there is plot and dialogue and theme and characterization and all that stuff, but when you get down to it he's right: movies are picture and sound. I had that constantly running through my mind as I revisited Heavy Metal this time, because that's exactly what the movie provides: dazzling images and cool sound. The animation, which I'm sure some viewers will consider dated in 2022, is consistently impressive and imaginative, employing a variety of styles and techniques. The soundtrack rules, showcasing songs by Sammy Hagar, Cheap Trick, Devo, and Stevie Nicks, among others. Beyond the rock music on the soundtrack, though, there's a really cool score by Elmer Bernstein and incredible sound design, which is really highlighted on the 4K UHD. Heavy Metal is a true visual and sonic experience. It's Picture and Sound. It's Pure Cinema. 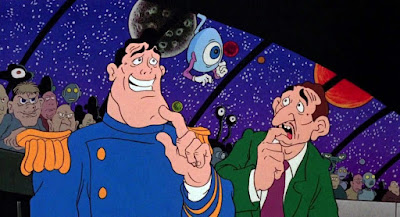 Like most anthologies, Heavy Metal is uneven and subjective; one person's favorite story is bound to be someone else's least. I'm partial to the scuzz noir of "Harry Canyon" and the imagination and comedy of "Den," all but carried by John Candy's vocal performance as the title character. "Captain Sternn" will always make me laugh for the way the animated Bruce Campbell keeps repeating "I've got an angle..." "B-17" is super cool in that the movie becomes an episode of Tales from the Crypt for a few minutes. Even the movie's least essential installment, "So Beautiful and So Dangerous," still offers the vocal talents of John Candy as a sexually proficient robot and Eugene Levy and Harold Ramis as drug-snorting aliens. It's at least kind of funny. 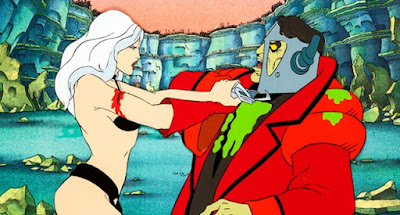 There's a blueprint for just how Heavy Metal could have gone wrong, and it's called Heavy Metal 2000, the DTV "sequel" from the year of the same name. With apologies to anyone who likes the movie (and to the late, great Julie Strain, who stars), it's the mirror universe version of Heavy Metal: cheap, occasionally shoddy animation, dogshit music, and a single story that's dull and repetitive. Worse, it's missing the sense of humor that makes the original film memorable. I know David Fincher was trying to reboot Heavy Metal for years, too, and truth be told I'm glad he didn't. There's something so special about the movie that could only exist in 1981, the year of Raiders of the Lost Ark and Excalibur and Quest for Fire and Time Bandits and at least a dozen classic horror movies. This was the wake of Star Wars, a time when the nerdiest genre shit was king, and Heavy Metal represents the apex of it all. "It Came from the '80s" exists because of movies like this.
Posted by Patrick Bromley at 5:00 AM