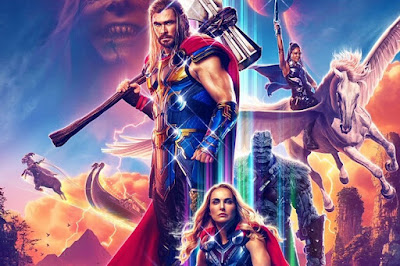 In which Taika irons out the kinks.

Few could have walked out of 2011’s Thor imagining that its titular hero — a stodgy, melodramatic bruiser fretting over his nobility — would become one of the Marvel Cinematic Universe’s most enduring characters, the only one (so far) to earn four solo adventures. Iron Man and Captain America were far more layered and charismatic, after all, and even the Incredible Hulk came off more accessible to a general audience. 2014’s The Dark World was no help, a gloomy and overwrought chore that failed to develop the god of thunder into something beyond a headstrong conduit for his famous hammer. How could Marvel grow and expand its cosmic universe if no one cared about its defining hero? Enter New Zealand comedy auteur Taika Waititi, whose 2017 Ragnarok finally retooled the character into a lovable oaf whose bluster masked a deep insecurity. Though undoubtedly uneven, Ragnarok was a life-saving fresh start that also brought Waititi’s iconoclastic ethos to the fore, exposing Asgard’s ruthless colonialism and challenging the divine rights of gods. 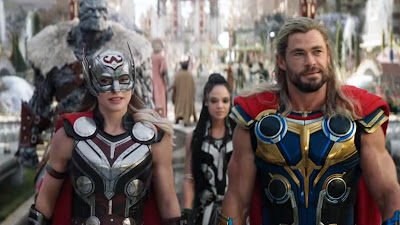 Those gods are at the center of this week’s Love and Thunder, which picks up sometime after the events of Avengers: Endgame. After a brief stint as a Guardian of the Galaxy, a slimmed-down Thor (Chris Hemsworth) is still lacking the direction he sought after granting Valkyrie (Tessa Thompson) the throne of New Asgard. Thor is closed off, sleepwalking through adventures and unwilling to forge bonds with anyone he meets. When the Guardians receive a distress call from Lady Sif (an underused but welcome Jaimie Alexander), however, Thor learns of Gorr the God Butcher (Christian Bale), a shadowy mystic who has sworn revenge against the celestial beings who allowed his daughter to die in agony. When Gorr kidnaps a group of Asgardian children, Thor and Valkyrie seek help in Omnipotence City, a gathering place of the gods administered by Zeus (a boisterous Russell Crowe). They’re joined by Korg (Waititi) and, to Thor’s amazement, a Mjolnir-wielding Jane Foster (Natalie Portman), who is using Asgardian magic to ward off her terminal cancer.

Though Waititi’s comic sensibilities brought much-needed levity to Ragnarok and helped Hemsworth codify a more memorable take on his signature character, that film buckled under the weight of MCU worldbuilding in a way that Love and Thunder — for which Waititi shares screenwriting credit with Jennifer Kaytin Robinson (Sweet/Vicious) — doesn’t have to. Instead of galaxy-ending catastrophe, Love and Thunder presents a more personal and philosophical conflict, an antagonist whose motives go beyond ego or avarice: Gorr met his indifferent creator on bended knee and was cast out as a supplicant, a lowly creature for whom there is no afterlife in paradise. He knows that the dark magic fueling his revenge will eventually kill him, but after that humiliation, what does he have to lose? Jane, too, is grappling with encroaching oblivion. She turns to magic when science fails her, stumbling back into her ex-boyfriend’s life and compensating for her crippling existential terror with a delightful performative confidence. But what better way to prepare for a meeting with god than to embody one for a while? 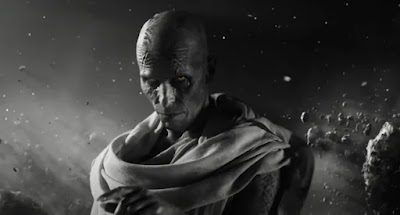 If that all sounds a little heavy, rest assured that Love and Thunder brings all the irreverent comedy we’ve come to expect (and sometimes dread) from Waititi and his merry band. Hemsworth has abandoned all vestiges of the Shakespearan conqueror of early entries, shifting firmly into what the internet would dub Dad Energy (with a blazing Guns ‘n Roses soundtrack to match). Portman returns to the MCU fold with significantly more verve and vigor than her previous outings, which relegated her to little else than the Concerned Girlfriend. As the greenhorn god known as Mighty Thor, she brings a playfulness not seen since, well, hell — Garden State? No Strings Attached? Is she funny in that? Anyway, she and Hemsworth maintain a reliable chemistry, but Love and Thunder misses a major opportunity by not giving her more time with the incomparable Thompson. Her Majesty the King is tragically sidelined in this entry, providing a bit of sardonic commentary here and there but lacking a real character arc befitting Thompson’s dazzling power and charm. 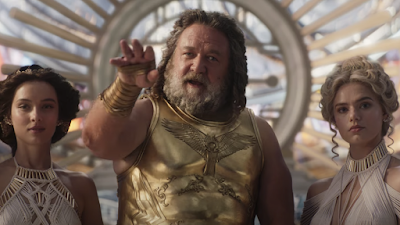 Bale makes his own dramatic return to the superhero genre, and Waititi finds the most striking, surreal angles from which to photograph his Gorr (think a rotting Voldermort in a hood). While the stylish director never misses a chance to bring the Technicolor fireworks — putting more than a little “rainbow” in Thor’s rainbow bridge — Gorr commands a legion of shadow monsters that allows Waititi to play with darkness as well. One battle sequence on a tiny moon even falls to black and white for a stretch, adding a little Eraserhead texture to an already vibrant palette. It’s just one of Waititi’s thousand little indulgences, some of which are sure to rub audiences the wrong way (Remember the “screaming goat” meme? Get ready for a lot of that). In the end, though, Love and Thunder succeeds as a blessedly small-scale Marvel adventure with minimal obstruction from intrusive cameos or side quests. It’s about losing faith and finding it again. It’s about inner peace. It’s also about rock monsters and Greek orgies, but you probably saw that coming.
Posted by Patrick Bromley at 8:00 AM