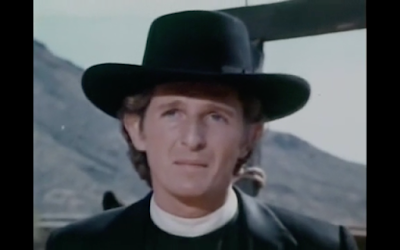 Marjoe in the Wild West!

The year is 1974. Two years prior, Marjoe Gortner grabbed America by the shorthairs in the documentary Marjoe. The following year he makes his acting debut in the feature-length pilot episode of Kojak and leaves a remarkable impression on Hollywood. As his career is just launched, Marjoe is in an extremely lucky and somewhat powerful position where he can pick and choose the roles offered to him. Granted, he's not co-starring with Al Pacino in the latest Lumet or Coppola, but he's got a choice of interesting roles in interesting movies and TV shows in front of him. So in 1974 Marjoe guests on three television programs, his first foray into television proper. First he appears in an episode of the private detective drama Barnaby Jones, where he plays a rock star (a real-life dream of Marjoe's) who ends up killing his songwriting partner. He then appears in an episode of the long-running hospital drama Medical Center, appropriately playing a faith healer whose wife has cancer and is now torn with the decision of seeking medical treatment for her condition or leaving it up to her husband and God to cure her. Marjoe then appeared in the single-seasoned cop show called Nakia which starred Robert Forster as a sheriff's deputy from the Navajo tribe in New Mexico. In the episode titled “The Moving Target,” Marjoe plays a folk singer who is being targeted by an ex-con after whom Forster is chasing. 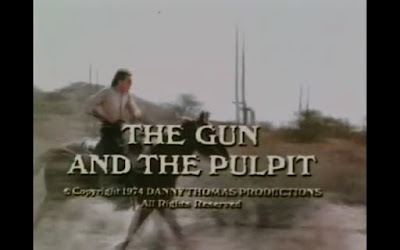 Before making his first leap onto the big screen in Mark Robson's disaster flick Earthquake, Marjoe appeared in his third made-for-TV movie, another feature-length pilot for a show that never took off. In The Gun and the Pulpit, Marjoe plays Ernie Parsons, a young, hot-to-trot gunslinger in the West. The movie opens with Parsons standing on the gallows, preparing to face justice for murder. A young, attractive woman whom Parsons had bedded earlier convinces the sheriff and judge that her lover was innocent – she has an alibi for him! Persuaded of his innocence, the lawmen set Parsons free and, before riding off, promises his latest conquest he'll come back for her (spoilers: he doesn't). Out on the open range he happens across a dead body – a preacher shot in the back. After searching the body, Parsons finds a letter written to the minister from someone in a town just down the road, begging him to come and help protect them from the evil Mr. Ross, a railroad man who wants to demolish the town in order to make way for his train. Stripping the man of his black duds and white collar, Parsons then rides intol town with the promise of hope for these people. All for a handsome fee, of course. 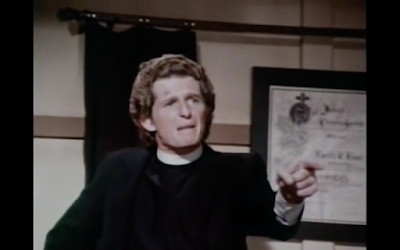 In the meantime, railroad tycoon Mr. Ross hires another hot-to-trot gunslinger called McCoy, played by the wonderful character actor Geoffrey Lewis. So with Parsons now acting as preacher and town mediator, a balancing act begins for him where his greed comes toe-to-toe with his heart. He begins to care about the townspeople and realizes maybe stealing from these lovely humans isn't the best idea. Among the townspeople you have actors like Estelle Parsons playing mother to Pamela Sue Martin who falls in love with Parsons, as well as Slim Pickens playing a character called Billy One-Eye who knows who Parsons really is but won't spoil the secret. Playing the big bad Mr. Ross is David Huddleston (probably most recognized as The Big Lebowski in The Big Lebowski). When McCoy shows up to kill Parsons, we're treated to one of the funniest shootouts I've ever seen. Guns are drawn and fired and the two men stand there, staring at each other, patting themselves in search of a bullet wound for an overly long but perfect amount of time. “You hit?” “No. You?” After this, Parsons and McCoy become partners to save the town and defeat Mr. Ross and his posse. 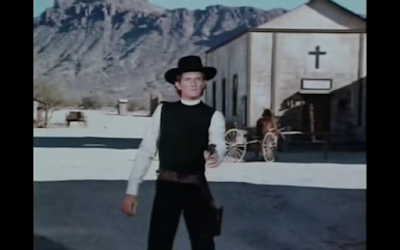 Directed by Daniel Petrie (Buster and Billie, Fort Apache the Bronx, and the greatest movie of all time, Lifeguard), The Gun and the Pulpit was meant to be the big kickoff for a western TV series featuring Ernie Parsons and his exploits throughout the wild west. With Marjoe's charisma this had the potential to be something worthwhile, but for one reason or another just didn't take off. Employing his earlier life as a preacher, Marjoe is perfect for this role. His energy behind the pulpit but also his heart for the townspeople radiates through the screen, bringing us in further to Ernie Parson's world. The Gun and the Pulpit by no means breaks new ground as a made-for-TV movie, nor is it revelatory in the way of writing or performing. But it is good, old fashioned, fun, safe, entertaining television. With a handful of character actors, several laugh-out-loud moments, and a classic western feel, The Gun and the Pulpit is well worth your time. And once again, it's a showcase for the man of the hour, Marjoe Gortner, displaying that no matter who was on screen with him, he was able to create magic.
Posted by Patrick Bromley at 5:00 AM

Email ThisBlogThis!Share to TwitterShare to FacebookShare to Pinterest
Labels: 1970s westerns, exploit this, made for tv movies, marjoe gortner, the gun and the pulpit