I went to see Jaws (my second favorite movie, don’t ask me the first I beg you) twice this weekend – once in IMAX and once in RealD 3D. Here are 10 reasons I strongly recommend the experience.

1. The 3D makes the film more immediate and terrifying. For example, in the opening Chrissie Watkins (Susan Backlinie) attack, the water/splashes at the bottom of the frame are popping out at you which make you feel like you’re being pulled below the surface.

2. Speaking of popping out at you, there’s some really effective 3D scare moments, like when the Coast Guard have rifles sticking at the faces of the boys pulling the prank with a cardboard fin, the jump scare with Ben Gardner’s head, and at the end when the shark jumps out of the water and onto the stern of the Orca. Another great moment is when the shark crashes through the hull of the Orca as the ship is sinking while Brody (Roy Scheider) is trying to jam the oxygen tank into its mouth. 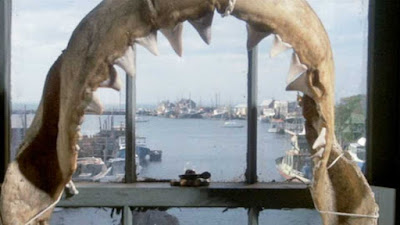 3. The depth of field of the 3D is incredible. Both the IMAX and RealD 3D presentations make you appreciate the shot compositions from director Steven Spielberg and cinematographer Bill Butler. The ocean seems vast, endless, and intimidating in IMAX (which adds to the tension) and the geography of Quint’s (Robert Shaw) boat – the Orca – stands out more in 3D (e.g., the pulpit sticking out in your face, the views high up from the top of the boat to the deck when someone is climbing). It really makes you feel like you can go out and touch parts of the boat. Also, the shot where you pass through the shark teeth to the window of Quint’s shack, as the three guys are setting off to sea on the Orca, is a stunning visual moment in 3D.

4. The sequence where Hooper (Richard Dreyfuss) enters the ocean in the shark-proof cage looks amazing in both IMAX and 3D. Any underwater sequence seems to be benefit from 3D as far as being immersive and in IMAX the shark looks so…damn…big (even more than usual). It’s pretty amazing.

5. In both IMAX and 3D you notice a lot of cool little details like as “Wow, there’s a ton of people visiting Amity,” (3D), look at the details of that grass/hallway (3D), look at those people doing bits of business in the background (IMAX) and look at the eye drawn/painted on the Tiger shark (both versions). It’s cool. I was less involved in the story watching Jaws in IMAX and RealD 3D, but it was an entirely new and rewarding experience because I was so attuned to the visual elements going on in the movie. I even noticed this time (in IMAX) that Hooper was eating chicken or fish with oysters and green beans at the Brody’s house. I never paid attention to that before. He really goes for it with those green beans! And in IMAX, during Peter Benchley’s cameo as a reporter on the beach, you can see that his hand is shaking at the bottom of the frame.

6. As far as the actors, Roy Scheider looks good in both IMAX and RealD 3D. Richard Dreyfuss dominates the 3D version (I seemed to notice his performance more than the others) and Robert Shaw takes over in IMAX. The film feels as larger than life as the Quint character himself and the IMAX close-ups on Robert Shaw are dominating.

7. I never noticed how many dogs are in Jaws until I saw it in IMAX and RealD 3D. Apparently, the Brody’s dog was Steven Spielberg’s dog in real life making a cameo. 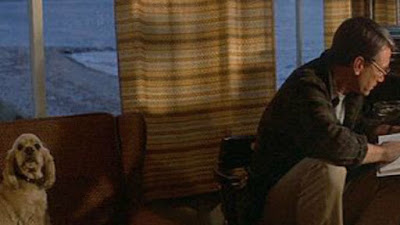 8. The Jaws theme (by John Williams) during the opening credits is something else when you see the film in IMAX. As the film was starting, and I was still settling into the experience, hearing the groundswell and creeping nature of that theme right off the top was truly special.

9. In both versions, it’s amazing looking down the mouth of the sharks (the Tiger shark near the middle after it’s hoisted up on the dock and the Great White at the end when it jumps out of the water and onto the Orca). The people who built these mechanical monsters did an amazing job. You momentarily feel like you’re in a trance and being shoved down the shark’s throat which is funny because the Tiger shark guy berates Hooper at one point and says (I’m paraphrasing) “Why don’t you stick you head in there and see if it’s a man-eater.”

10. IMAX and/or 3D trailers. I saw the IMAX at Regal and there was a cool trailer for Dawn of the Dead 3D (which is coming out around Halloween). I wish I could have seen that trailer in 3D but oh well. Seeing the Avatar re-release trailer in both IMAX and 3D was fantastic. I’m definitely going back to the IMAX theater to see it in IMAX 3D later this month. There was an IMAX trailer for Ticket to Paradise (the upcoming George Clooney-Julia Roberts comedy) and now I’m even more in love with Billie Lourd (#IMAXBump).

For those of you who saw Jaws in IMAX or RealD 3D last weekend, what did you think?
Posted by Patrick Bromley at 12:00 PM