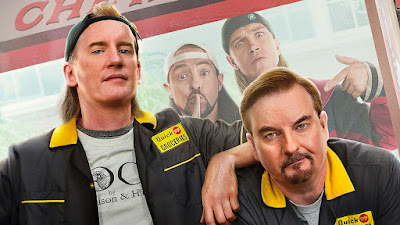 “What the fuck would the great Randal Graves do if he were half the master of his destiny that I’m supposed to be?” asks Dante Hicks (Brian O’Halloran) in Clerks II’s dramatic climax. “I’d buy the QuickStop and reopen it myself!” Randal (Jeff Anderson) barks in response, queuing one of the most poignant and cathartic sequences in writer/director Kevin Smith’s filmography: His clerks — patron saints of Gen X ennui — are finally taking a modicum of control over their destinies, stepping up to the proverbial plate in the only way they know how. They’ll never be billionaire entrepreneurs, of course, but after thirty years of impotent commentary from the margins, owning and operating Jersey’s most famous corner stores feels like exactly the degree of adult responsibility these two slackers can handle. Smith closes on the pair back behind the counter — their counter— and fades to his iconic black and white, cementing his thesis that personal growth is relative to the person doing the growing. 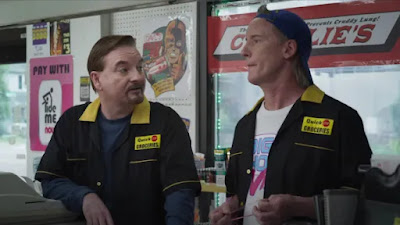 Fifteen years later, very little has changed for our clerks. Hockey on the roof, gum in the padlocks, and so on. Though Jay and Silent Bob (Jason Mewes and Smith) have converted RST Video to a CBT dispensary, they still insist on clandestine curbside transactions that confuse patrons of the now-legal substance (“That’s how we did it in the ‘90s, yo!”). Elias (Trevor Fehrman) is still part of the gang, still catching rides from his parents and still wasting the Good Word on deaf ears. Things putter along as normal until Randal suffers a sudden heart attack, triggering an existential crisis that inspires him to make a movie based on his life of convenience. Dante, still grieving Becky’s (Rosario Dawson) untimely death, is predictably skeptical of the idea, relenting only after a vision of his lost love insists that there are still chapters of his life yet to be written. Armed with a crew of misfits and a loan from Dante’s former fiancee (Jennifer Schwalbach Smith as Emma), the clerks begin production on their working-class opus.

Smith devotees will immediately recognize Clerks III as an ode to his landmark original film, a series of thinly-veiled references to its real-life production and the cultural legacy it bore. Randal’s heart attack is clearly inspired by Smith’s own 2018 brush with death, and despite drawing heavily from Clerks’ storied development for 2008’s Zack and Miri Make a Porno, Smith returns to the cinematic womb this time to reckon with his own mortality. Death looms all over Clerks III, including an extended heart surgery scene (with cameos from Amy Sedaris and Justin Long), coffin-side conversations with Ghost Becky (who extols the joys of sex in heaven), the once-devout Elias going full atheist goth, and a second major character death that sets the stage for Smith’s final assessment of his life and career. By far the most funereal film Smith has ever made (a significant achievement in light of Dogma and Red State’s apocalyptic overtones), Clerks III wants to be a touching and introspective victory lap across a sea of warm, reassuring nostalgia. 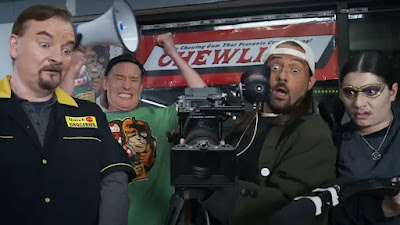 And for many of Smith’s most ardent fans, it will be. They’ll revel in its incessant nods to View Askew lore, including the First Avenue Playhouse (where Smith’s famous friends make their perfunctory cameos), Jeff Anderson’s raccoon eye makeup, and Jay Mewes’ refusal to dance in front of the Clerks crew. Nostalgia is potent, as Don Draper once told us, a twinge in our hearts far more powerful than memory alone. It feels good to revisit Clerks, to see our old friends still banging around behind the counter, because it feeds our own need for reassurance in our personal narratives; for as much as we’ve grown, we’ve also stayed the same. And that’s great! I’m sure many viewers will enjoy that very much. But Smith has drawn from this particular well far too many times now — including just two years ago with Jay and Silent Bob Reboot — for any new insight, and Clerks III’s sloppy and disjointed attempts at theme and character reflect its multiple iterations and script drafts, the pages of which have surely been cobbled together here.

It’s also deeply unfunny, the product of an Extremely Online Gen X Dad who believes references to NFTs and The Mandalorian qualify as edgy jokes. He’s teetered on this precipice for a while now, but Smith seems to have finally been swallowed by his own circular internet echochamber, writing Clerks III as if it’s one of his Evening With monologues or an episode of one of his thousand pop culture podcasts. It’s the product of a creator who spends most of his time talking about his creations on stage, one whose more recent attempts at innovation (including the underrated Tusk) were apparently met with enough apprehension to push him back into telling safe, predictable stories that require the least possible effort. Smith goes through this every ten years or so, of course (is anyone online old enough to remember the Jersey Girl backlash?), but whereas some of his resets inspired a fresh energy (Clerks II), there’s a distinct laziness to Clerks III that leaves us wondering if Smith’s heart is even in this anymore. 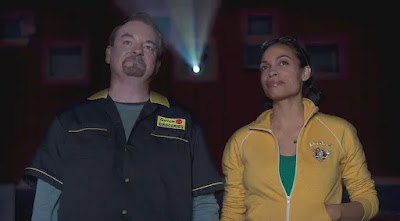 Smith and many of his fans would object to this assessment, I imagine, insisting instead that he has a right to work out his issues through these characters and that there’s a neat symmetry in using them as autobiographical mouthpieces. “This is all I got in life,” he recently told an interviewer. “Lucas has Star Wars…I got my clerks.” And it’s easy to see why a middle-class Catholic kid from New Jersey would retreat to his comfort zone when forced to reckon with the chaos of impending oblivion. But despite his protestations, Smith is much more than Clerks, Clerks is much more than Smith, and Clerks III fails chiefly because it hijacks sovereign characters with completed arcs and forces them to deal with midlife crises for which they (and, with all due respect, the actors playing them) are catastrophically ill-suited to handle. Dante and Randal deserve better than Clerks III, and Smith is capable of more than its feckless pandering and false enlightenment. There’s a third act ahead of you, Mr. Smith, but it sure ain't this shit.
Posted by Patrick Bromley at 12:00 PM