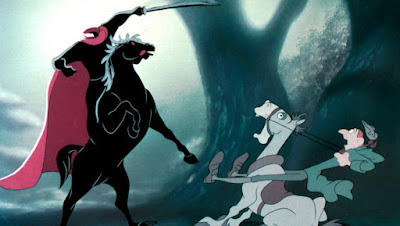 Happy Scary Movie Month, everyone! Being a meticulous planner, I'd toiled for over a month about what to write during this joyous month. Ideas bandied about but nothing stuck. At the eleventh hour I settled on the idea of a film diary – a cop out maybe, but my goal in writing about movies is to get people excited about things they normally wouldn't watch. Thus, the dawn of “Notes on Film,” my version of Jonas Mekas's column from The Village Voice. 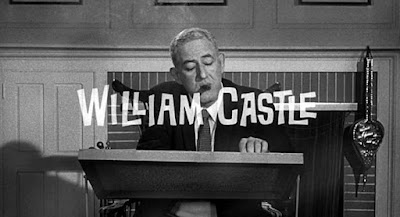 As I do twice a year, I make a tentative list of movies I want to watch for Junesploitation and SMM. By no means is that list permanent as somedays I run out of time or simply let my mood determine what I'm going to watch. The one thing I will stick to this month, though, is dedicate each Saturday to a director. To kick things off for SMM '22 I did a mini marathon of William Castle movies. House on Haunted Hill is one of my comfort movies (most Vincent Price movies are), and I'd already seen The Tingler, 13 Ghosts, and The Old Dark House. The impetus for my mini Castle was his 1956 thriller “starring” Joan Crawford, I Saw What You Did. “Starring” because Crawford appears on screen for only about 10 minutes, but, naturally, she dominates those 10 minutes. The film really stars John Ireland as a man who's just murdered his wife, and Andi Garrett, a teenage girl who, along with her friend and kid sister, make crank calls by saying, “I saw what you did,” and then hanging up. Ireland is on the receiving end of one of those calls and chases the girls down. It's fun and exciting and different than Castle's gimmicky movies. That was followed by Strait-Jacket (1964), a movie that actually stars Crawford as a woman who murdered her husband and has been recently released from a psychiatric hospital after 20 years. It's a fun whodunnit/proto-slasher. Next up was Homicidal (1961), my barely-favorite of the Castle mini, about a mysterious young woman coming back to her home in hopes of receiving an inheritance. Quite Hitchcockian, this one had an ending that completely took me by surprise (maybe I'm dense). I ended my Castle mini with Mr. Sardonicus (1961), a Svengoolie staple that I always seem to miss. While not my favorite out of the quad, I still enjoyed it. This also has the gimmick at the end where Castle interrupts the movie and asks the audience “Mercy? Or no mercy?” for the killer's sentencing.

That evening, while my wife was away, my boys and I sat down for our annual viewing of the 1949 Disney version of Washington Irving's The Legend of Sleepy Hollow. I don't need to sell this to anyone as I see many people kicking their season off with this classic narrated by Bing Crosby. After the boys went to bed and while I awaited my wife's arrival I snuck in a non-horror so as not to experience SMM burnout on the first day. All the Boys Are Called Patrick, a 1959 short from Jean-Luc Godard is a fun little rom-com about a pickup artist who goes after two women who are roommates. And finally, to wrap day one, Bobbie and I watched a couple shorts from the Criterion Channel's horror shorts collection: Sea Devil (2014), about a fisherman who is smuggling Cuban immigrants into the States and discovers a giant sea monster; and Geometria (1987), Guillermo del Toro's second short film about a teenager who summons a demon to get out of doing his homework. Both are incredibly fun and breezy, and I recommend going through the entire collection on Criterion. 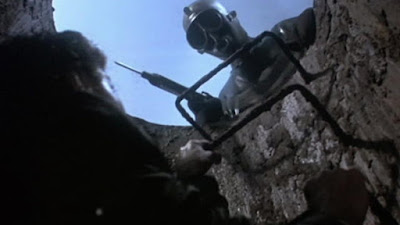 Sunday was full of possession and monsters. I kicked things off with Jack Clayton's paranoid ghost/possession film The Innocents (1961). Having been on my watchlist for too long, I was thrilled to be able to cross this one off. Starring Deborah Kerr as a governess who was recently hired to care for two orphaned children at their giant manse, I appreciated how this played with many tropes, including haunted houses, creepy children, paranoia, and possession. As a loose adaptation of Henry James's “The Turn of the Screw,” I couldn't help but think this would play beautifully in a double with Michael Winner's version of the story, The Nightcomers (1971), starring Marlon Brando. For my second feature of the day I changed directions and headed to Japan for Haruyasu Noguchi's Gappa, the Triphibian Monster (1967), a Godzilla (1954) riff that is a straight-up remake of (but much better movie than) Gorgo (1961). Scientists happen upon an island, they steal an egg of a Gappa, a giant, winged, mohawked, beaked, laser-shooting dragon-thing, it hatches, Mom and Dad Gappa come to rescue and destroy everything in their way. While no Godzilla, it ranks high-middle in the kaiju genre. This was followed by the Michael York-Burt Lancaster version of H.G. Wells's The Island of Dr. Moreau (1977). I haven't seen the Frankenheimer version since it came out, but I remember liking it (I love David Gregory's 2014 documentary Lost Soul: The Doomed Journey of Richard Stanley's Island of Dr. Moreau), but I can't imagine it's better than Don Taylor's version. The highlight here is the scene where a man literally fights a tiger. It ranks alongside man v. shark in Zombie (1979). I wrapped up the weekend with another short, One of Two Evils (2015), a stop-motion allegory about a young boy whose parents are going through a divorce. CW: this is not for the weak-stomached, also featuring sexual assault. As opposed to claymation, this looks more like waxmation. The figures are gross, the monsters are hideous, and it's heartbreaking and beautiful. 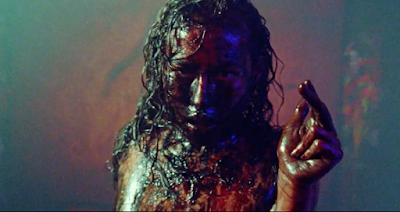 Monday brought with it a Dutch slasher, scary clowns, and a queer-art-psychotronic short. Dick Maas's Amsterdamned (1988) is one of few films that marries two genres I love: slasher and '80s cop. Plus it has a scuba diving, harpoon-wielding killer, and one of the greatest scenes where the freshly-slaughtered and bloody corpse of a prostitute hanging from a bridge is dragged across a glass-ceilinged boat full of children and tourists. Kookie (2016) is a 13-minute short from director Justin Harding you can watch on YouTube about a little girl who keeps sneaking cookies, so her mom brings home a “cursed” cookie jar in the shape of a terrifying clown. I ended the night with Myra Paci's Transeltown (1992), a short from the LGBTQ shorts collection on the Criterion Channel. I intended this to be a palette cleanser after Kookie, but it definitely could play for SMM. A young trans woman brings home a naked woman in a coma who ends up dying and then turning into a puddle of goopy tapioca pearls. On Tuesday I watched my favorite movie from 2019, Bliss. Joe Begos is one of the most exciting directors working today. Just like Larry Fessenden, Begos and crew make their art with whatever resources they have available to them. Bliss is a raunchy, slimy, drug-fueled take on a vampire film second only to Habit (1995) in my favorites. That afternoon, after reading JB's latest, Rowen and I watched Bugs Bunny's Howl-O-Skreem Spooktacular (2022) on HBO Max. As a big time Loony Tunes aficionado, this was exactly what I wanted. You gotta mix in some of that lighthearted faire, kids or not, to keep your heart young. I ended the night with the first film from my favorite franchise: Phantasm. Again, like Fessenden, like Begos, like so many others, Don Coscarelli went out and made his movies however he could. Phantasm is a warm blanket for me. After dozens of viewings I finally realized that it's the love and familial aspect between Reg, Mike, and Jody that keeps me returning to this franchise. I also highly recommend Coscarelli's autobiography, True Indie, one of the best books I've ever read. 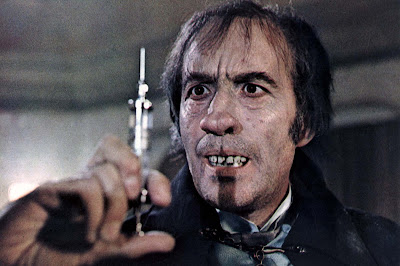 Wednesday was busy so I only got one movie in. I had waited for six years to watch the final film in my favorite franchise because I didn't want it to end. Unfortunately, I didn't realize Phantasm: Ravager (2016) was the cheapest out of the bunch. I was happy to see everyone come back, and I dug the dementia storyline, but woof. And finally, as I'm writing these words, I'm re-watching the Indicator Blu-ray of Stephen Weeks's I, Monster (1971), a take on Robert Louis Stevenson's “Strange Case of Dr Jekyll and Mr Hyde.” While it's generally agreed upon that Rouben Mamouian's Dr. Jekyll and Mr. Hyde (1931) is the best version of this story, I prefer the Gerard Kikoine version starring Anthony Perkins called Edge of Sanity (1989). I, Monster, though, is an entertaining version from Amicus starring Christopher Lee as the doctor/killer and Peter Cushing as his friend investigating the murders.

Tentively scheduled for next week is a rewatch of RZ's The Munsters with the family, a Carpenter mini, Freddy, Jason, and Frankenstein. Stay scary and watch some short films!
Posted by Patrick Bromley at 12:00 PM