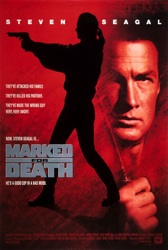 Steven Seagal's third movie, 1990's Marked for Death, is often called one of the action star's best. In some ways it is, probably because it's one of his few efforts that feels like a real movie. It played in theaters and was released by an actual studio (Fox). After nearly two decades of direct-to-DVD shlock, Marked for Death might as well be Avatar. A closer look reveals the movie to be more of a NEAR success -- lots of cool shit, some good ideas, but never coming together the way Seagal's best movies do.

Seagal plays John Hatcher, a DEA agent whose partner is killed during an attempted bust in Columbia. Regretting his actions on the job and fed up with the futility of the drug war, Hatcher quits the force and returns home to Chicago to visit his sister and her daughter (played by a future scream queen Danielle Harris, who starred in The Last Boy Scout just one year later). He's not looking for trouble, but trouble finds him when an old buddy (the always great Keith David) points out that a gang of Jamaican drug dealers are basically taking over the city. After shots are fired at his niece and his sister is assaulted, Hatcher has no choice but to take the fight to the Jamaicans on their home turf, led by the mysterious and legendary Screwface (Basil Wallace). It's Ponytail v. Dreadlocks. Figure out who wins. 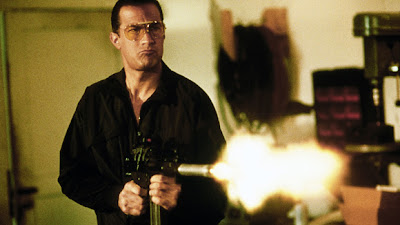 (Side note: this rule doesn't apply to two movies in the Golden Age: Executive Decision, which isn't quite a Seagal movie even though he's in it, and The Glimmer Man, because I've seen that movie a couple of times but I can't remember whether or not Seagal is the Glimmer Man. So we'll take it out of the running. Under Siege 2 kind of fucks things up, too, but I like to pretend the movie is called Under Siege, Too, so that I can say "Steven Seagal IS Under Siege, Too. Once you throw in the Dark Territory subtitle, it ruins everything. I don't know why I get out of bed anymore.)

Marked for Death was the first and only Seagal movie I owned for a long time, back when I was still collecting VHS tapes and bought a previously viewed copy from my local video store (I had less than 10 movies at that point, and this was one of them). For that reason, I've seen it more than maybe any other Seagal movie, which is weird because there are a bunch that I like better. In a way, Marked for Death finds Seagal kind of coasting -- his movie persona had already been firmly established (Above the Law announced him and Hard to Kill confirmed his status as a movie star) and he wouldn't start experimenting with it until Out for Justice, so he's pretty much spinning his wheels here.

A lot of that wheel spinning works, especially for us action fans who know what we want and are happy to have it delivered effectively, nothing more. But the movie has a bunch of good ideas for an action movie that never really deliver -- and which, interestingly enough, would be explored to greater effect in later Seagal efforts. I like Seagal's confession speech that opens the movie, where he admits to being a broken soul and doing terrible things in the line of duty. NONE of that informs the character or the events of the movie in any way, but Seagal would explore exactly this kind of character in the terrific DTDVD effort Pistol Whipped. The notion of sending Seagal to another country to fuck up foreign bad guys would be done to better effect in Into the Sun and Mercenary for Justice, which are lesser movies but which do a better job of making the locations matter. The shapeless, let's-go-here-and-do-this-thing-and-then-go-here-and-do-this-other-thing makes Marked for Death feel like a drag, but it's a big part of what makes Seagal's next movie, Out for Justice, arguably his best.

The high points of Marked for Death are really high: there's a fight in a department store that's amazing, the presence of Keith David -- however wasted he is (and he is completely wasted) -- automatically improves anything, and the movie has one of the very best bad guy deaths of ALL TIME. Seagal even gets off a couple of good one-liners ("Let's hope they weren't triplets..."), which he isn't really known for -- he's more of a silent badass. And if you're of the belief that he derives his power from his ponytail, it's never been longer than it is here.

The photography is good and the action is shot well, probably because the movie is directed by the great Dwight H. Little. His participation makes me want to like the movie more than I do, but things keep getting in the way -- things like the endless weapons-procuring montage, or the voodoo woman who runs afoul of the Jamaicans, or Joanna Pacula showing up in the movie for SOME REASON. It takes place in Chicago, but is never really recognizable as the Chicago that I've lived in all my life; Rapid Fire, which Little directed just a few years later, makes much better use of the city (and is a better movie overall if you're keeping score). Even Jamaica fails to make much of an impression, as the entire country is basically reduced to a warehouse and a bar where -- surprise! -- Jimmy Cliff happens to be playing! That's like walking into any random bar in the U.S. and finding Bruce Springsteen playing, because it's America. Of course he would be playing in America.

On paper, Basil Wallace's Screwface is a terrific villain. We all remember him as such. But what we're really giving credit to is the twist (and it's a good one) and his incredible (second) death scene; other than that, Screwface does very little that's interesting in the movie. Actually, he does very little at all. He has cool green eyes and he says really memorable lines like "Everybody want go heaven. Nobody want dead." He's right, too. Nobody want dead. If Screwface knew what he was in store for, he would not want dead either. SPOILERS for Marked for Death: The movie's most lasting contribution is in the way it dispatches its villain, not once but twice. The first feels totally anticlimactic: Seagal chops off Screwface's head with a sword, and it's abrupt and badass but unsatisfying. The disappointment only serves to make the reveal that Screwface is actually a set of TWINS even better (it also explains his power of being able to be in more than one place at a time, which is dismissed for most of the running time as magic Jamaican voodoo power, which I assure you is a thing), because a) we truly don't see it coming and b) the movie makes up for Screwface 1's quick and easy death by giving Screwface 2 the craziest, most brutal death ever: he gets slashed in the face with a samurai sword, has both eyes gouged out by Seagal's thumbs, has his back broken and is dropped down an elevator shaft onto a giant metal spike. It's something else, and it sends us out on a high note.

Why the villains are Jamaicans, I cannot say, but it can't be a coincidence that this and Predator 2 were both released in 1990 and both prominently feature Jamaican gangs as the villains. I guess the Russians and the Middle East were played out by the end of the '80s, and Miami Vice had stolen all the thunder from South America. Plus, Americans clearly had a very limited understanding of Jamaican culture (as evidenced by their portrayal in both movies), meaning the screenwriters could turn them into whatever they wanted. Maybe they really do all call each other "bloodclot." I don't know. They do in Marked for Death. Seriously, if you own this movie on DVD or Blu-ray (and WHY WOULDN'T YOU??), make sure you turn on the subtitles next time you watch it. The dialogue for Screwface's gang is fascinating.

Make no mistake -- Marked for Death is not "bad" Seagal. I like it. I'll watch it a bunch more times. But it is not GREAT Seagal, either, and it has a reputation for being such. What the movie offers is a chance to look back at a time when Seagal was handsome and agile, moving with tremendous speed and doing his own fight scenes instead of letting a double take over. It's an action movie from the best decade for the genre in history, landing smack dab between 1985 and 1995. It's still in the top five of Seagal's theatrical output, but maybe not quite deserving of its reputation. It's just ai'ree, bloodclot. 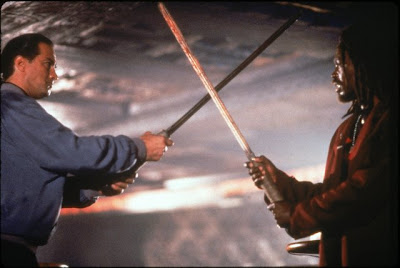 Got an action movie you'd like to see highlighted in a future Heavy Action? Let us know in the comments below.
Posted by Patrick Bromley at 7:02 AM