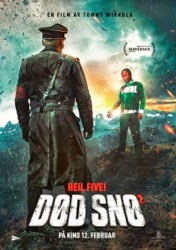 Two zombie armies are better than one.

When it comes to horror movies, sequels are almost a forgone conclusion. If a filmmaker comes up with a movie that's even remotely successful -- or, at the very least, contains at least one recognizable element that can be exploited in the future -- you can expect more installments of a movie whether you want them or not. The fact that Dead Snow, Norwegian writer/director Tommy Wirkola's 2009 Nazi zombie movie, caught on at all is probably a result of its striking monsters, even though they're not put to much use. It's a movie that has enough of a fan base to warrant a sequel because it feels like it's really fun and good even though it mostly isn't.

No, I'm not the biggest fan of the original Dead Snow. Despite some impressive practical effects and a wintery setting that at least feels different from most other entries in the exhausted subgenre, the movie is mostly uninspired. It's mean-spirited, it goes for laughs just by making movie references and fails to capitalize on its own inspired premise -- Nazi zombies -- beyond just scary-looking character design. It's a movie I've revisited more than once, sure that I was missing something on previous viewings and that I should like it more than I do. Each time, I have walked away finding the movie hollow and feeling bad about myself and the world. 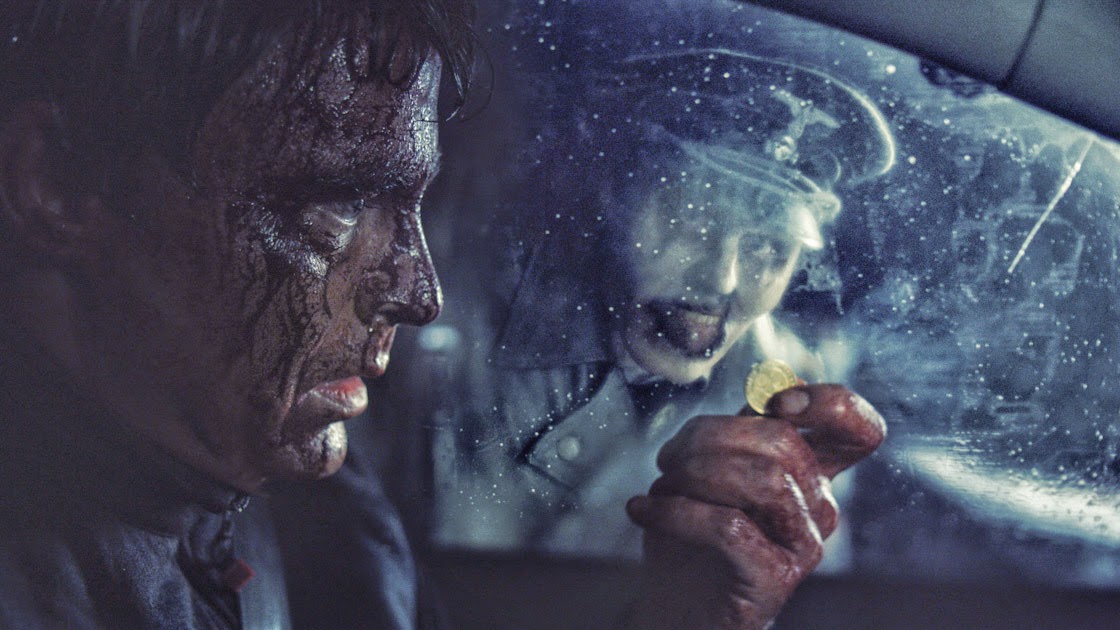 The 2014 sequel Dead Snow: Red vs. Dead (or Dead Snow 2 as I'm hoping it eventually comes to be called) improves on the original film in almost every way. The gags are inventive and funny. The pacing is better. The historical element actually matters. This movie shows me things I've never seen in a movie before, none of which I will spoil here. Zombie movies are so fucking played out by now that it's a kind of miracle Wirkola has made a movie that actually feels fresh and fun. I don't know if he sat down and figured out all the ways the first Dead Snow fell short or if coming to Hollywood to make the underrated Hansel & Gretel: Witch Hunters made him a better director; whatever the case, he has made a sequel that is vastly superior to the original. Not many horror movies can pull that off.

Picking up immediately where the original Dead Snow left off, Red vs. Dead finds lone human survivor Martin (Vegar Hoel) escaping zombie Herzog and his army, crashing his car and winding up in the hospital. While unconscious, doctors accidentally reattach his severed arm with Herzog's, giving him a super-powered zombie arm that winds up having a few extra abilities. The police want him for the murders of his friends (plus some extras that accidentally happen along the way), so Martin escapes the hospital and enlists the aid of a team of self-proclaimed Zombie Hunters from America, led by the great Martin Starr. As Herzog tears across an entire Norwegian town to complete some unfinished business and create a new zombie army, Martin and the Zombie Squad must find a way to stop those undead assholes from wiping out all of humanity. The solution? Russian zombies. 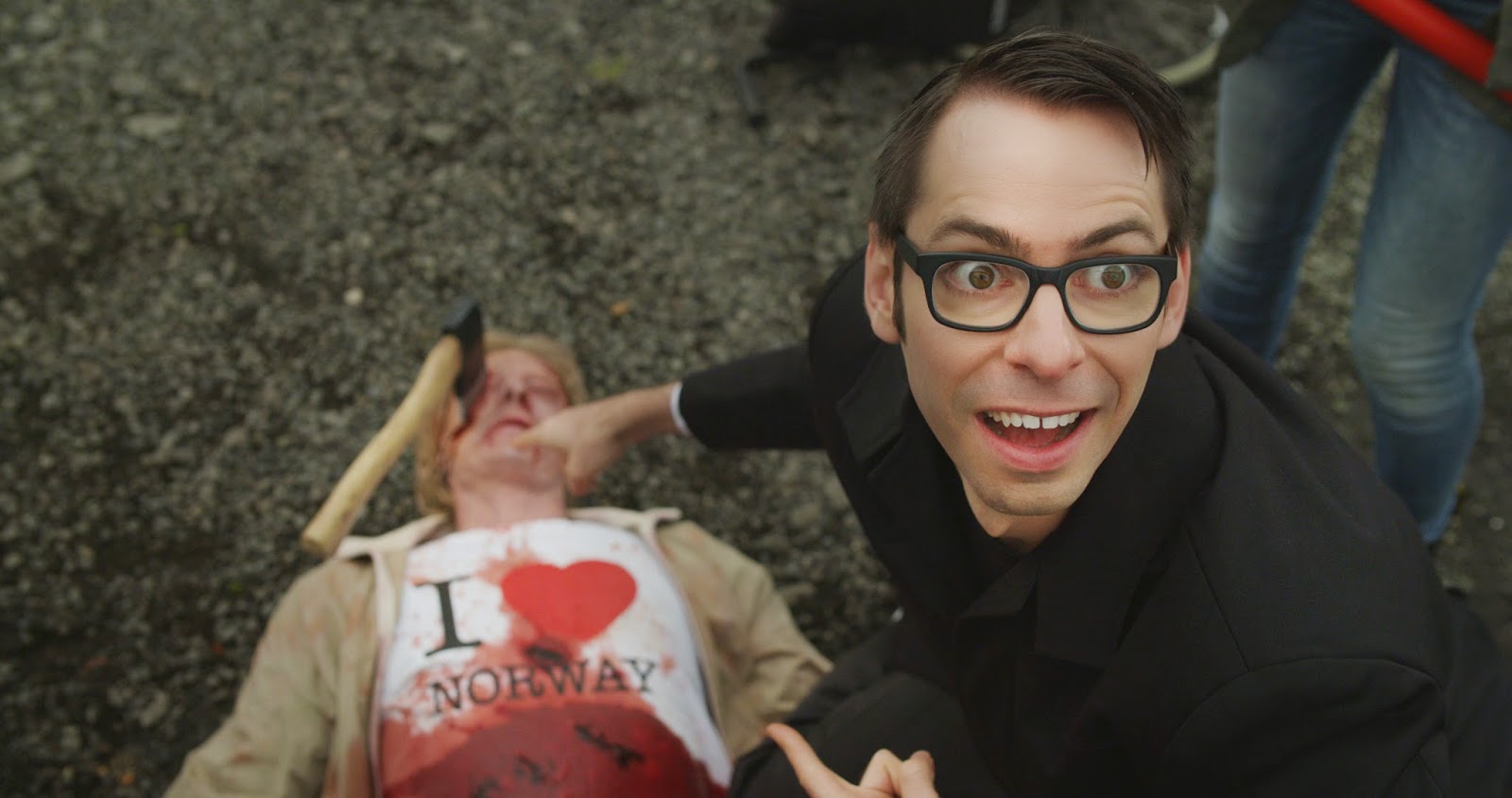 The "splatstick" genre is a tough one to successfully pull off. Balancing the ratio of laughs to gore is a challenge, as is devising gags that are worthy of, well, gags. Dead Snow had the pitch and tone of a splatstick movie but was never actually funny, like a comedy without jokes. Dead Snow 2 rights that ship, offering all kinds of laughs. Sometimes, it's a well-conceived kill. Sometimes it's something so shocking you can't believe it's in a movie. Sometimes it's Wirkola's willingness to repeat the same gag a fifth or sixth time with the full knowledge that it should no longer be funny, which only serves to make it even funnier. I laughed a lot during Dead Snow 2.

While it never reaches the heights of greats like Evil Dead 2: Dead by Dawn or Peter Jackson's Dead Alive (aka Braindead), Dead Snow: Red vs. Dead is one of the most entertaining and fucking bonkers horror comedies I've ever seen. It helps to actually have characters I like; though still little more than the de factor hero, Vegar Hoel's Martin is more sympathetic here because he's haunted by a tragic mistake made in the last film. Even that pays off in the movie, leading to a punchline so crazy you can't believe a movie is ending this way. His newly-gained superpowers help, too, making him less of "last man standing" and more of a full-on proactive hero. The addition of the Zombie Squad is an inspired choice, too, as it allows Wirkola to comment on the current obsession with all things undead in pop culture while giving us characters we actually want to survive (another problem he corrects from the last time around). 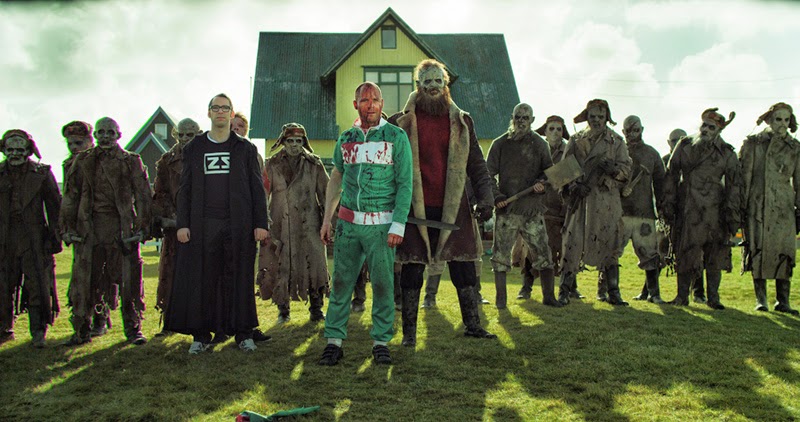 Jocelyn DeBoer brings a lot of sunniness to her role as a member of the Zombie Squad, but her character represents a problematic holdover from the first Dead Snow. The joke is that she is obsessed with Star Wars. There's nothing more to it than that. She wants to talk about Star Wars and speaks in mostly Star Wars references. She's a direct ancestor of the Erland character from the first movie, the "movie geek" who was on hand just so that movie could pretend it was self-aware. But it's a minor blemish on an otherwise really funny movie, and DeBoer is cheery enough to put even the thin material over.

I don't know what the future is for the release of Dead Snow: Red vs. Dead. My guess is that like a lot of low-budget and independent genre movies these days, it will get a limited release and run on VOD and iTunes. If you have the chance to see it in a theater (even as a midnight movie), it's worth the effort. This is a true audience film -- one that deserves to be experienced with a big group of people laughing, cheering and loudly reacting to all the crazy shit Tommy Wirkola throws out there. It's a bloody blast.

Posted by Patrick Bromley at 11:13 AM