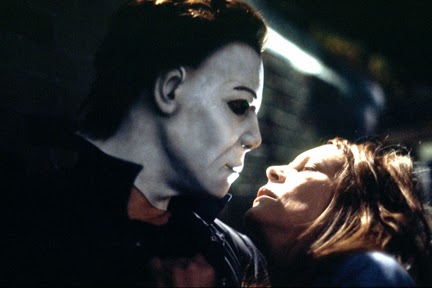 Give me a summer camp, an axe and a man in a mask.

As far back as I can remember, I have always loved horror movies. I couldn't tell you why; from the first images I saw of those black and white Universal monsters as a very little kid, I have been drawn to them. Horror fans are the only subset of movie fans to inevitably be asked "Why do you like this?" No one wants to know how a person started liking comedies or dramas, but horror fans are always expected to go back to their childhoods and process the psychology behind their love of the genre.

The slasher film has long been my favorite subgenre within horror, which may seem strange since outside of horror it's arguably the least-respected of all the subgenres (or it was until so-called "torture porn" came along to replace it as horror's whipping boy). The main reason I love them? Variety. In other subgenres, you're pretty much locked into an established set of rules and tropes. You do vampires, you've got to have fangs and neck biting and blood drinking and stakes through the heart; you do werewolves and you've got to do transformations and silver bullets. Yes, there are exceptions. Many of the greats are the ones that figure out ways to do the familiar in new ways (Near Dark, for example, features hardly any of the usual signifiers of a vampire movie), but the sameness to many of the subgenres stifles their creativity. 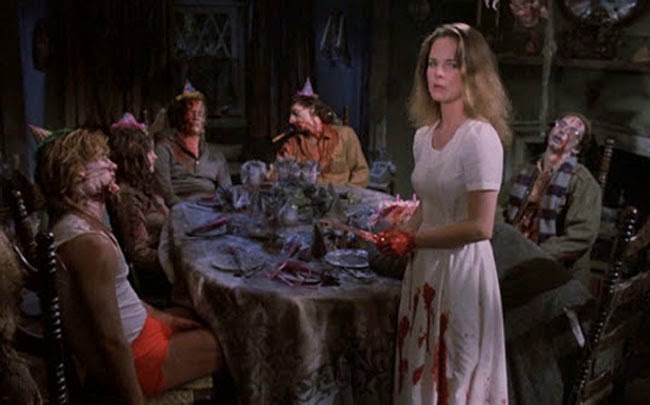 There is sameness to the slasher genre, too, so much so that an entire franchise of slasher movies (the Scream series) rose to popularity just by pointing out and playing upon the conventions. But the details can vary from movie to movie -- the music may be the same, but the words are completely different. Slashers come in all shapes and sizes. They have different costumes, different gimmicks. They can kill with an endless variety of implements, often times all in the span of a single film.

The variety and sheer number of slashers also lends itself to a pretty huge disparity in quality, too; for every one good slasher, there are 10-15 bad ones. There's little consistency to what rises to the top, either. Freddy Krueger has lasting power because Wes Craven had a good gimmick -- a boogeyman who terrorizes you and kills you in your dreams -- plus it had a cool makeup, razor glove and Robert Englund's performance. That series might have more going for it than any other slasher franchise (which makes it all the more depressing when it settles into routine formula and broad comedy in later installments). There's nothing all that interesting about Michael Myers -- in fact, it is the lack of anything interesting or even distinguishable that made him so scary in the first place. Even his face is a blank. But he keeps coming back in movie after movie because the original Halloween was so good. There's not much stuff that's Michael Myers-related that couldn't have been replaced by something/someone else and turned into a non-Halloween movie. In fact, it's the building of a mythology that ends up sinking the series.

Friday the 13th is a different animal altogether. It is the single most influential slasher movie ever made, imitated dozens of times despite not being all that good (and I say this as someone who loves the series). Sure, Black Christmas and Halloween created the template, but it was Friday that proved if you pushed the gore, if you pushed the sexuality, if you hired amateur actors and kept the budget low, if you just ripped off and stood on the shoulders of better films that came before you, there is money to be made. This is the approach taken by 75% of the slashers that would follow. Sure, the formula was often a copy, too, but that's secondary in terms of Friday's influence. 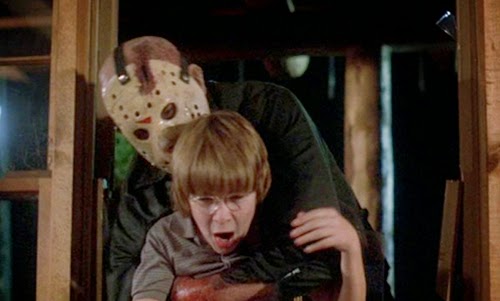 Because there are so many slashers -- particularly in the '80s heyday -- a true student of them begins to notice the small differences. Filmmakers began making weird choices to set their movies apart. Like the French film critics of the 1950s started to do with programmer and B-westerns, one can notice repeating thematic concerns and stylistic similarities in many of the movies; an auteurist reading of the slasher genre isn't just possible -- it's downright necessary once you've seen enough of them. There are things Joseph Zito does in The Prowler that set up what he tries to accomplish in Friday the 13th: The Final Chapter. Wes Craven is the most obvious choice for a slasher auteur, having made the original Nightmare, trying to repeat it with Shocker, revitalizing the genre with Scream and finally killing it with My Soul to Take. It's all sixes and sevens.

You can also break slashers down into categories and examine the subgenres within the subgenre. There are high school slashers and college slashers; there are summer camp slashers and Christmas slashers, postmodern slashers and retro slashers. Even shopping mall slashers could be a category. We've now reached a point where there's a new cycle of slasher movies; as many of the classics are being remade, we can look at two of the "same" movie and examine how they are different in both technique and societal context. What does My Bloody Valentine 3D (2009) have to say about the world that the original My Bloody Valentine didn't in 1981? Or does the fact that it says very little about the world actually mean more? The former is all about style and visual gimmicks; the latter is about a time and place and working class people. They're both good for different reasons. 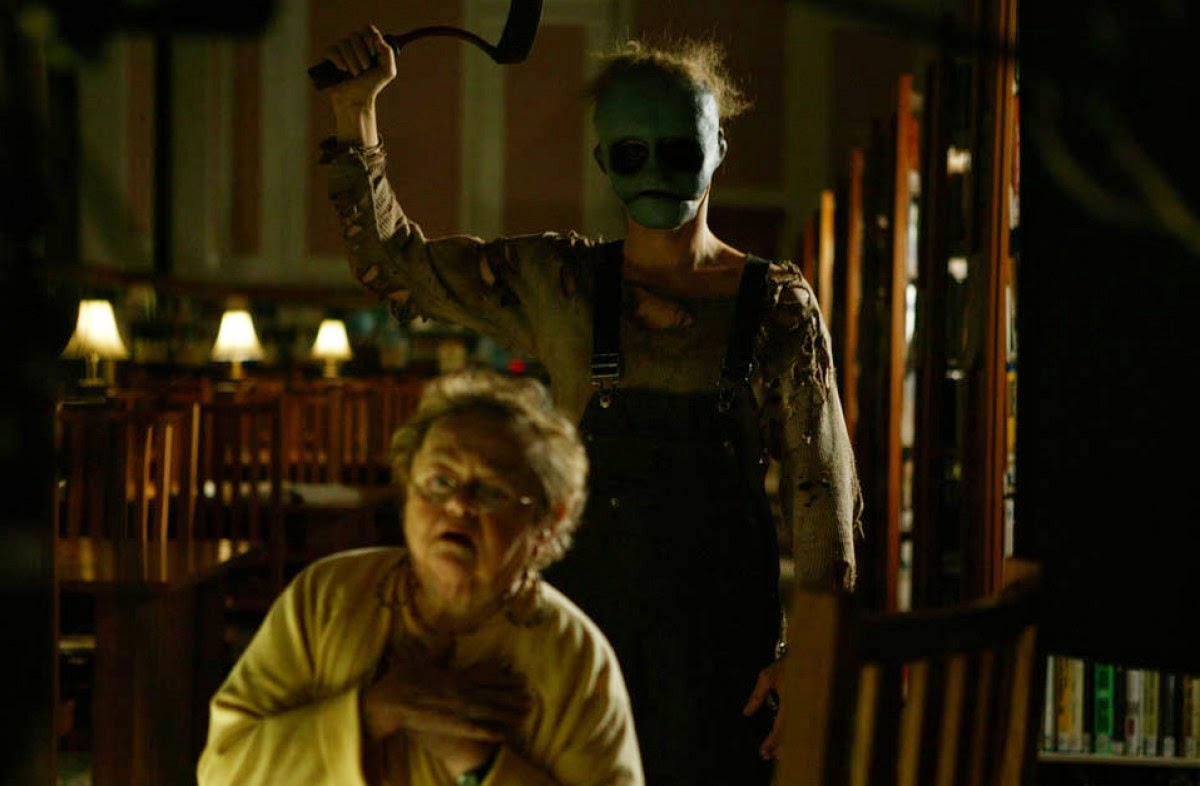 Or, at the very least, you could just look at the movies within their respective franchises. Yes, many of the Friday the 13ths are similar and repetitive and appear to an outsider like the same movie made 11 times. But if you're a fan of the slasher genre or of the series, you can look at them like they're the Bond films -- there are differences both major and minor depending on the director at the helm, the period, the filmmaking trends of the time. There are "good" ones and "bad" ones, though every fan's opinions on what those might be vary from person to person. Though separated by only a few years, there are huge differences between Friday 2 and Friday 6: Jason Lives, between Jason Lives and The New Blood just two years later. The differences are even more apparent in the Nightmare on Elm Street series, in which each filmmaker was able to put a distinct stamp on his or her (yes, it's one of the few franchises with an entry directed by a 'her') installment.

The first slasher I can remember seeing was the original Nightmare on Elm Street some time around the third grade. I was sleeping over at my friend Davin's house, and his parents let him watch rated R movies (this is also where I saw my first naked woman in Revenge of the Nerds). Davin had already seen Elm Street and would spend our lunchtimes describing all the scariest scenes to me -- in particular the one in which Johnny Depp is sucked into his bed and the geyser of blood shoots out, or when Freddy Krueger's tongue slips through the phone and lick's at Nancy's face on other end. I was terrified of the movie before I had ever seen it, but also fascinated by it -- I needed to see these things play out as a way of controlling my fear of them. So I got permission from my parents to sleep over at Davin's, keeping it a secret that we would be watching an R-rated horror movie.

And a strange thing happened. The movie didn't scare me. Yes, I got nervous and anxious when Glen started getting pulled into the bed because I knew what was coming, but once I saw it I realized it was no big deal. The special effect used to realize the phone gag is pretty rough, breaking the illusion much more than terrifying a little kid who was expecting a two-foot tongue to slither out of the receiver. The idea of being scared is what had scared me -- which, it turns out, is a lot of what Elm Street is about, even if I didn't realize that until later in life. 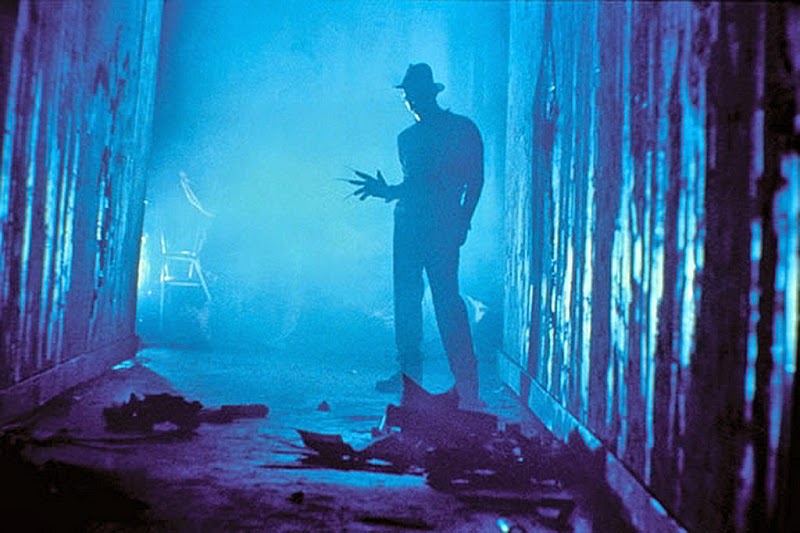 That was it. I was HOOKED (doyouseewhatIdidthereyouseewhatIdidthere). Hardly a weekend went by during the next decade that I wasn't seeking out some new horror movie, usually a slasher -- at that time, the most prevalent of all the subgenres.

That first slasher I ever saw -- A Nightmare on Elm Street -- is also my favorite one, a realization I've only come to in the last five years or so. It combines the best possible versions of everything I love about the genre: an interesting, scary killer, inventive death scenes, an atmosphere of tension and dread and, best of all, great characters. Nancy Thompson is my all-time favorite Final Girl: resourceful, smart, caring, courageous, warm, down to earth. In a genre defined by its cardboard cutout character "types," Nancy Thompson is a real person. All of Nightmare's characters are -- especially its teenagers, notoriously the most underserved group in these kinds of movies. These young people have wants and needs, they care about one another and have interior lives. Even Rod the asshole has an arc.

There are so many things I've come to love about A Nightmare on Elm Street that it probably deserves its own "Movies I Love" column. Maybe someday I'll get to it. Elric Kane of the terrific Killer POV podcast has said that if it hadn't been diluted by the sequels, the original Nightmare would arguably be called the greatest horror movie ever made. That's a big, bold statement (one of the reasons I like him on that show), but I also think he's on to something. 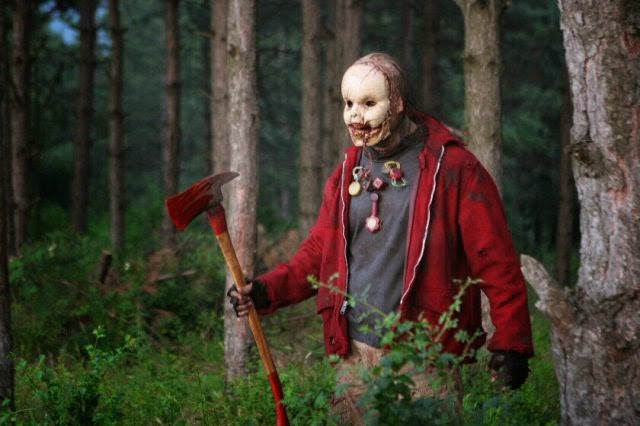 Originally for Junesploitation's Slashers! day, I wanted to put together a list of underrated slasher movies. As it turns out, I've already written and talked about many of my picks so often on this site that it seems pointless -- does anyone really want to hear me go on about the greatness of The Funhouse or Halloween 4: The Return of Michael Myers or Tourist Trap again? I suspect not. I consulted our own Mike Pomaro, whose affection for the slasher genre runs as deep as my own, and he suggested I pen this love letter. I'm glad he did, as I've long considered the slasher movie to be my favorite subgenre of horror but have never taken the time to actually figure out why.

I'm still not sure I've answered that part, but then the "why" of horror has always eluded me. As much as I like to think about why I like the things I like -- it's this site's whole reason for being, really -- I don't really question it when it comes to horror. Maybe it's because I remember responding to it at such a young age that it I assume it's something genetically inherent in me, or maybe I've lived with it so long that I've never known anything else. Whatever the reason, it no longer matters. I love horror. I love slasher movies. I love them like I love pizza -- there's something to like even in the bad shit, because at least it's pizza. Ridiculous, gratuitous, bloody and wonderful pizza.

Happy Junesploitation, everyone.
Posted by Patrick Bromley at 7:24 AM