Ever come across a movie—maybe while reading a book or surfing the internet—that you decide you’ve got to see but that cannot be seen? I call these “holy grail” films. The rise of better technology and the ubiquity of bootlegs have made this phenomenon less and less common, but still it happens.

I have not completely given up hope on attending a screening of Lon Chaney’s London After Midnight in my lifetime. Call me a cock-eyed optimist.

For the last forty-two years, I have been obsessing over a particular holy grail film: Anthony Newley’s Can Heironymous Merkin Ever Forget Mercy Humppe and Find True Happiness? I am not making this up. Here’s the trailer. It’s the only time I know of that a film has been described as “yeasty.”

FULL DISCLOSURE: Actually, I once made up some films. Two and a half years ago, Patrick called on us all to describe “Movies We Have Not Seen.” I thought it would be more fun to just make up a short list of films that never existed, but sounded like they could. It feels so good to come clean about this! You can find my original lies here.

I have waxed nostalgic in this space in the past about how, not too long ago, it was much more difficult to see certain films. When I was younger, if the film in question did not turn up at one of the three revival houses in my area (the late, lamented Varsity and Parkway theaters and the still-going-strong “happiest place on earth,” The Music Box Theatre) or on one of the only seven broadcast networks, one was, how shall we say, hosed. 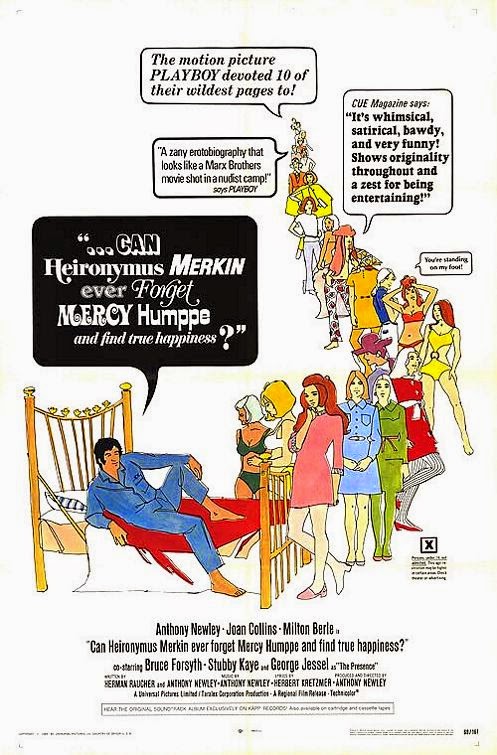 Somehow, when I was ten years old, I was put on a mailing list to receive the Universal 16mm Rental catalog, which was used by institutions and school groups who wanted to show theatrical films in their own auditoria. Why anyone would think a ten year-old would have the scratch or the equipment to screen 16mm films is still a mystery to me. Like all things related to film, I pored over that catalog, especially the pictures it presented of all the current films available to rent. It was through that catalog that I learned there was a film version of Kurt Vonnegut’s Slaughterhouse-Five. It was that tattered, dog-eared catalog that first introduced me to Can Heironymous Merkin Ever Forget Mercy Humppe and Find True Happiness? The photograph accompanying the film’s description depicted director/writer/star Anthony Newly dressed as a clown-faced marionette being pulled on strings and standing next to a scantily-clad blonde lady. The catalog’s description described the film as a musical comedy that was also rated X.

Fat chance that 10 year-old me would ever get to see that! 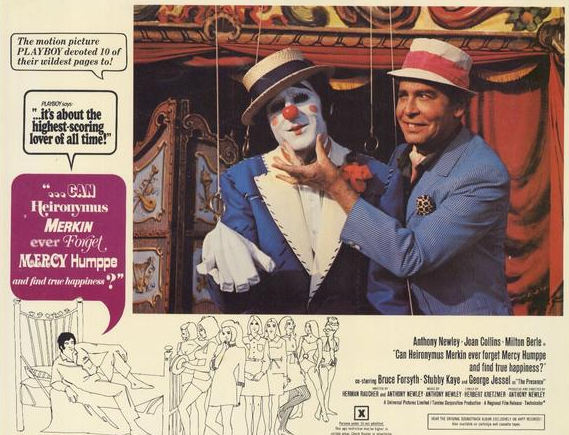 Can Heironymous Merkin Ever Forget Mercy Humppe and Find True Happiness? appears these days mostly on web articles devoted to films with really bad titles, nestled between Avenging Disco Godfather (1979, Wagner), The Incredibly Strange Creatures Who Stopped Living and Became Mixed-Up Zombies (1963, Steckler), and Jesse James Meets Frankenstein’s Daughter (1966, Beaudine). And again, I did NOT make those up.

The Plot in Brief (from what I have gathered): Heironymous Merkin (Anthony Newley) summons his mother and children to the beach to show them an autobiographical film on the day after his fortieth birthday. Merkin is haunted by Death (Georgie Jessel) and an unscrupulous agent, Goodtime Eddie Filth (Milton Berle). The majority of the film-within-a-film revolves around Merkin’s inability to stay interested in his Hollywood starlet wife Polyester Poontang (Joan Collins) in the wake of hundreds of other women throwing themselves at him, including the titular character Mercy Humppe (Connie Kreski, a Playboy Playmate of the Month).

Did I mention this was a musical? Or that Newley and Collins were really married at the time of the film’s production? Or that Collins has stated this movie was one of the reasons for their divorce? Or that Newley appears mostly nude in the majority of the film? The film was, after all, rated X.

Here’s one of the film’s catchier songs. This clips also gives us a wonderful picture of the film’s way-out art direction, Joan Collins’ “singing voice,” and Newley’s bare ass. WARNING: You won’t be able to get this song out of your head once you hear it. It is annoyingly memorable:

Anthony Newley haunted my youth. He was an ever-present guest star on television variety shows, and no one else on earth sang quite like him. In my digging and reading about him and his film, I have discovered much about Mr. Newley. A child star, he first gained fame playing the Artful Dodger in David Lean’s 1948 version of Oliver Twist. After college, he collaborated with Leslie Bricusse on the musical Stop The World, I Want To Get Off and played the lead on Broadway for almost three years. Stop the World contained the hit song “What Kind of Fool Am I?” which was recorded and performed by hundreds of singers in the sixties, including Frank Sinatra. 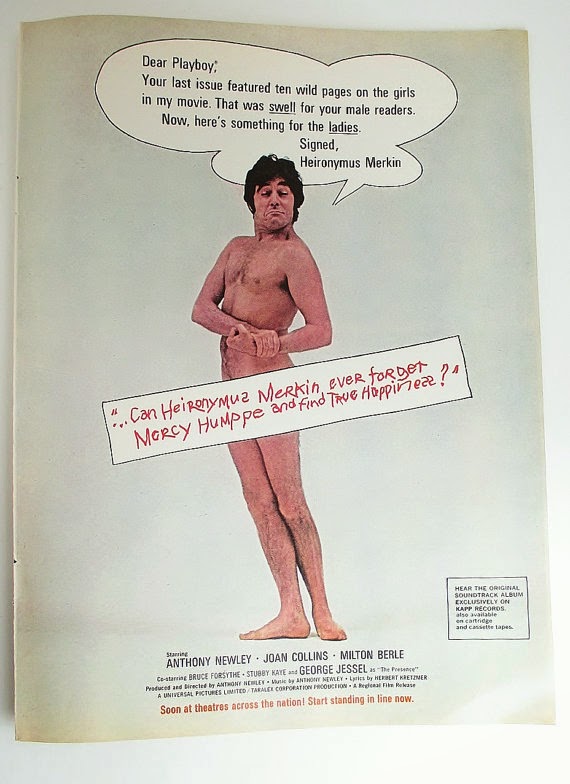 Newley and Bricusse went on to write the title song of the James Bond film Goldfinger. Newley later appeared in Doctor Dolittle, with screenplay, music, and lyrics by Bricusse. Newley and Bricusse later collaborated on The Roar of the Greasepaint, The Smell of the Crowd, which failed with both critics and audiences, though it yielded the hit song “Who Can I Turn To?” which is a shameless rewrite of their earlier “What Kind of Fool Am I?” The pair later wrote the utterly charming songs for the film version of Willy Wonka and the Chocolate Factory, featuring the worldwide hit song “The Candy Man.” Then Newley discovered Vegas and… well… he finished up his show business career co-starring in a British soap opera, The Eastenders and 1987’s The Garbage Pail Kids Movie.

Newley is still remembered for his odd, theatrical style of singing, which every cheap stand-up comic did a bad impression of in the mid seventies. Take a look—though in this clip, I think Newley is a little drunk:

Critics were not kind to his crazy, self-indulgent film, but Roger Ebert gave the film three stars and said, “[Heironymous] is strange, wonderful, original, and not quite successful. It is just about the first attempt in English to make the sort of personal film Fellini and Godard have been experimenting with in their very different ways. It is not as great as 8 ½, but it has the same honesty and self-mocking quality.”

THIS JUST IN: After seriously considering shelling out $97 for an import (bootleg) copy on Amazon, another vendor recently stepped up, offering a cheaper (bootleg) alternative! Goodwill Industries of Southern California thrift store offered an import (bootleg) copy for 19 bucks. Don’t all rush to the site, it’s already gone, and it’s ALL MINE! The DVD is slowly making its way here from California; I don’t know if the poor little disc is walking or hitching a ride. Amazon informs me that I will have it by August. So this quest… is nearing its end.

BUT WAIT! This saga gets better! Now YOU ALL can answer the movie’s timeless, titular question for YOURSELVES. In researching this article, gathering up photos and reviewing Youtube videos, I’ve learned that some outfit called rarefilms.com (bootlegs.com) finally posted the entire film! You can all watch it right now. Be my guest. Why not fix yourself a “chalk and cheese” snack plate to accompany your screening?

Me? I am patiently waiting for my import (bootleg) DVD. I have waited forty-two years to see this movie. I can wait a few more weeks. In the meantime, tell me about your “holy grail” films in the comment section below.
Posted by Patrick Bromley at 12:00 PM