So many movies. It's all for you, Damien. 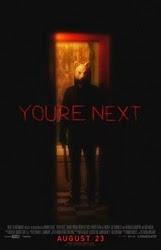 Adam Riske: You're Next (2013, dir. Adam Wingard) 2013 was a great year for the horror genre (The Lords of Salem, Stoker, Hansel & Gretel: Witch Hunters, The Conjuring) but the one I put above all of them is You're Next. I'm sure many of you have already seen this; if you haven't, check out the best horror movie in recent years. 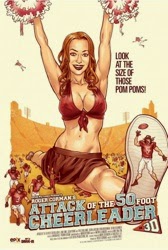 Adam Thas: Attack of the 50 ft Cheerleader (2012, dir. Kevin O'Neil) Okay, let’s just start out by saying this movie was produced by (and stars) Roger Corman and contains all the elements/nudity that you would come to expect from a Corman movie. The movie follows Cassie Stratford (Jena Sims), who, in an attempt to please her mother, consumes an experimental serum that makes her super hot -- as well as a few other side effects. The movie isn’t very good, but it isn’t trying to be very good. This movie isn’t saying anything about anything or trying to break any cinematic ground (unless you count a topless catfight between two gigantic women "groundbreaking"). If you are anything like me, you sometimes just want a brainless, yet amusing, movie to veg out on. If you ever are in one of those moods -- or want to be in one of those moods—you should definitely give Attack of the 50 ft Cheerleader a try. 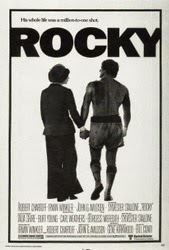 Erich: Rocky (1976; dir. John Avildsen) Inspired by recent episodes of the Badass Digest podcast, I've been working my way through the Rocky movies. The sequels have their goofy charms, but this original works by itself as a character study of a neighborhood palooka who falls in love with a quiet pet shop employee, then stumbles into a title shot against the heavyweight champion who underestimates his opponent's ability to take a punch. The training montage is famous, Burgess Meredith kills it as grumpy trainer Mick, and the final bout is thrilling—but the best scenes in this Sylvester Stallone-penned Best Picture winner focus on the working class struggles of Rocky, Adrian, and her abusive brother Paulie. With the third Expendables movie closing out the 2014 Summer movie season, it's worth revisiting Stallone's early career, when he was more likely to shoot off his mouth than a machine gun. 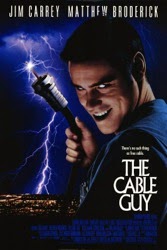 Heath Holland: The Cable Guy (1996, dir. Ben Stiller) This underappreciated dark comedy follows a cable guy named Larry who wears trucker hats and sleeveless shirts....wait, wrong cable guy. Ben Stiller directs Jim Carrey and Matthew Broderick as a maladjusted man and his unlikely new friend (victim?) in a story full of twisted humor and commentary on our addiction to television and media. I appreciated it when I saw it in the theater 18 years ago and I've only come to appreciate it more over the years. I give kudos to Jim Carrey for pushing against repeating himself and seeking darker material at a time when he could very easily have made millions of dollars giving the exact same performance. Similarly, Ben Stiller took a big gamble behind the camera by using America's favorite comedian to hold up a mirror on our own behavior. Also watch for early performances from Jack Black and Leslie Mann before they both married one of the film's producers, Judd Apatow (hey, it's California). It's interesting to look back on the themes within The Cable Guy and realize much worse things are now than they were in 1996. Since Jim Carrey is doing sequels, maybe it's time for the next chapter in the saga: Social Media Guy. 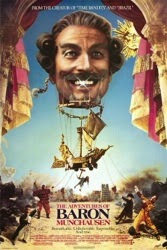 JB: The Adventures of Baron Munchausen (1989, dir. Terry Gilliam) I love the messiness of this film; the untidiness of life that pervades all of Terry Gilliam's best work. His frame runneth over. Of course, as time goes by, his message-- that governments overemphasize and even create dangers to keep their citizens petrified and easy to control-- seems to become less and less true as the world around us becomes much more authentically dangerous. The stellar cast includes John Neville, Sarah Polley before she became a famous director, Oliver Reed, Eric Idle, and Uma Thurman, in what I believe was only her second film. A little nonsense now and then is relished by the best of men. 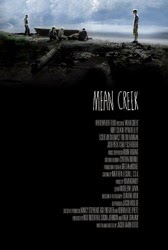 Patrick: Mean Creek (2004, dir. Jacob Aaron Estes) Listen. LISTEN. I haven't seen Mean Creek in several years, but I remember it as a movie with a fantastic first hour that peters out in its last 25 minutes. A group of kids take the miserably obnoxious school bully (a still-chubby Josh Peck) out on a boat trip to teach him a lesson and things go horribly, horribly wrong. Enough of the movie is really good to warrant a viewing even if (assuming my memory is correct) it doesn't quite come together the way I might have liked. This won a special Independent Spirit Award for movies made under $500,000. That's got to count for something, right??
Posted by Patrick Bromley at 12:00 PM