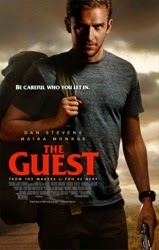 It's everything cool you love about movies in one kickass package.

Director Adam Wingard and writer Simon Barrett have fast become one of my favorite partnerships in all of Hollywood. Their first collaboration, 2010's A Horrible Way to Die, offered a different spin on the serial killer film and presented it as an intimate indie drama. Last year's You're Next twisted the tired home invasion subgenre into something thrilling and funny; it was one of my favorite films of 2013 and one of my favorite horror movies of the last 10 years. Now they've reunited for The Guest, another wonderful piece of genre filmmaking which isn't quite a horror movie but isn't too far off, either. Wingard himself has described it was the result of watching a double feature of Halloween and The Terminator. That about sums it up.

Dan Stevens plays David, a soldier who has just returned from active duty and pays a visit to the Peterson family, who are still grieving over the loss of their son Caleb, with whom David served. David is handsome and well-mannered. He doesn't eat or drink much. He barely sleeps. What he does is try to help with anything the Petersons need, whether it's taking care of son Luke (Brendan Meyer) and his bullying problem at school or keeping a secret for older sister Anna (Maika Monroe, a lab-created hybrid of Kat Dennings and Gwen Stefani). But then Anna begins to suspect David might not be exactly who he says he is...and then some men come looking for him... 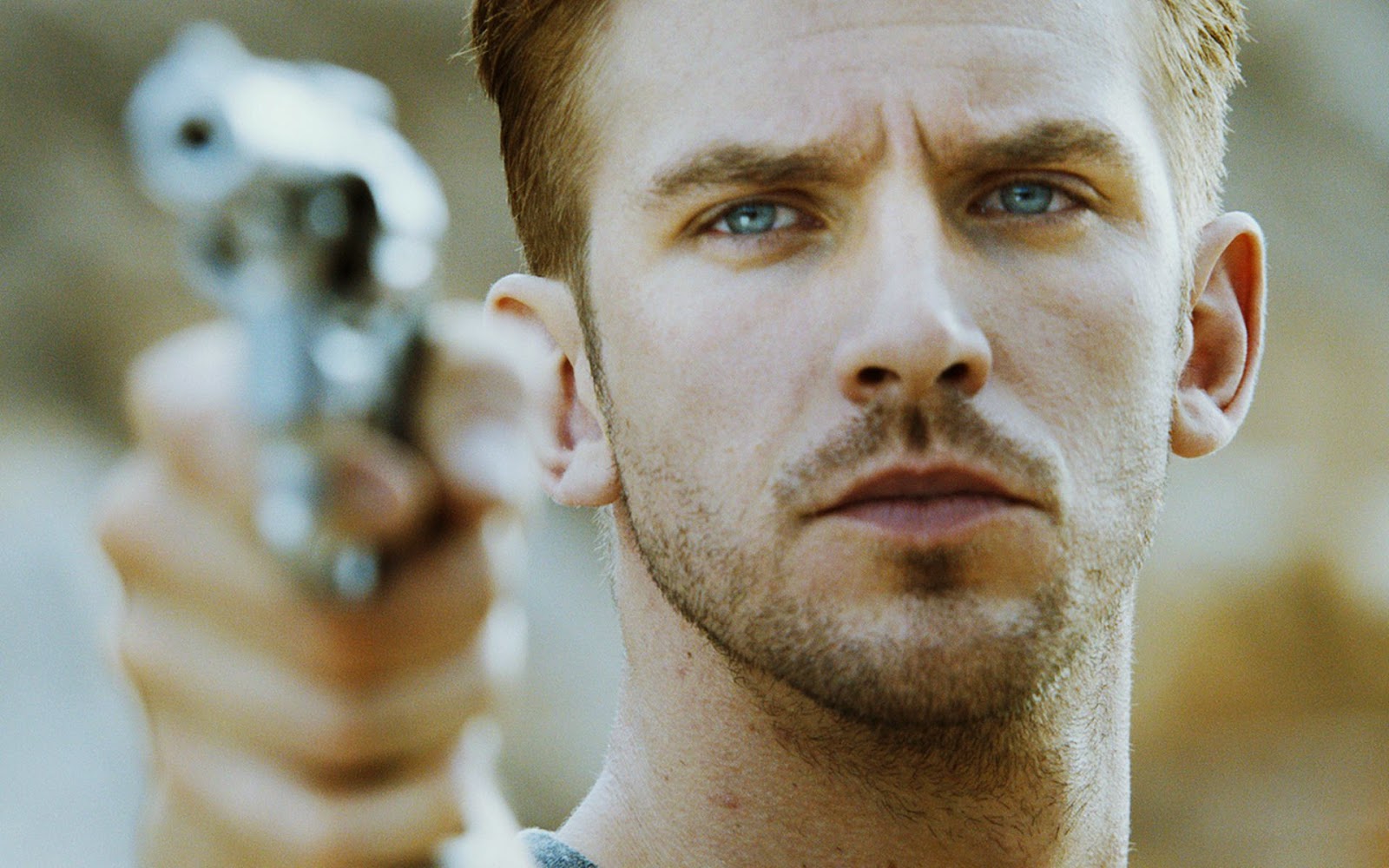 Part action film, part slasher movie, part black comedy, The Guest is a tight, violent thriller that delivers everything you could hope for from a movie like this. Barrett's screenplay teases where it's going without explicitly laying it all out, scoring laughs as it piles on the insanity -- the movie knows how crazy it's getting but never stops to wink at us and say "Isn't this all crazy?" It's a series of small escalations that start out grounded in reality and gradually morph into Action Movie Problems (#actionmovieproblems). There's a fine line between being self-aware and being self-referential, and it's a line the movie deftly walks.

Stevens, a British actor best known for starring on Downton Abbey (which I still have never seen), is a real-deal dreamboat -- he has the chiseled looks of Paul Walker, the love-me stoicism of Ryan Gosling and the ice blue eyes of Steve McQueen. But his entire performance is pitched as a critique of the nice guy hunk we've been seeing on film ever since Nicholas Sparks became a thing: he locks in on the decency bordering on psychosis so often portrayed as romantic fantasy in other movies and makes it so literal it becomes comic. It's the kind of performance that turns actors into movie stars in the span of a single role. While he's got a few more movies hitting theaters in the coming months (including A Walk Among the Tombstones in just a few days), this is the one for which he'll be remembered at year's end. He's incredible. 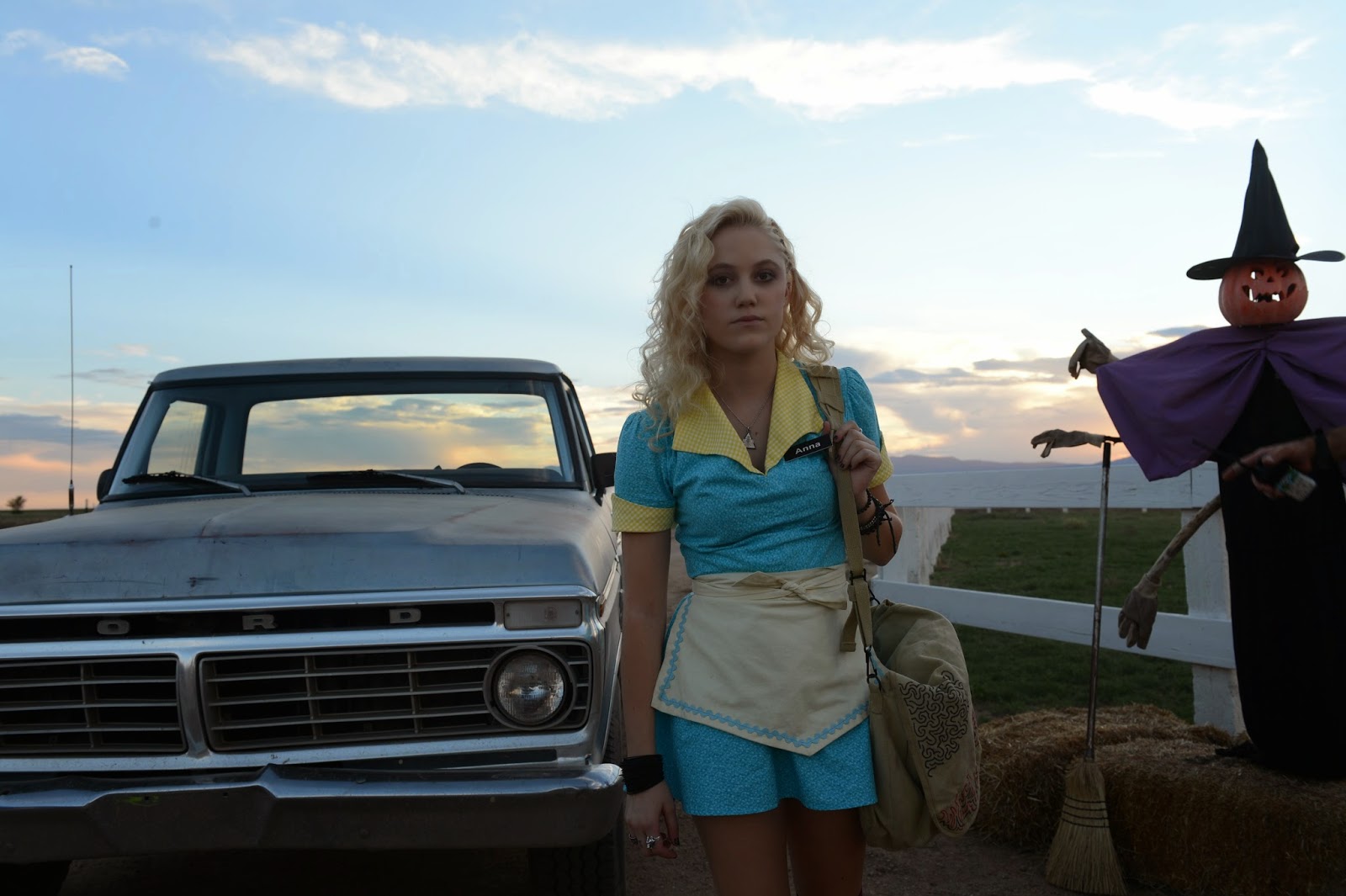 As for Wingard, he continues to grow more confident and focused as a director; I'd dare call The Guest his most accomplished film to date. There are no missteps. It knows just how long to follow a certain thread before shifting gears and revealing information that steers the film into some new genre category. It avoids exposition dumps, giving the audience credit for keeping up but also recognizing when knowing the back story just doesn't matter. It knows how to get laughs not by making overt jokes but through expert timing and an acknowledgment of its own insanity (one line delivered completely innocently by Stevens -- it involves setting a fire -- is one of the funniest I've heard in a movie all year). This is a movie that knows exactly what it wants to do and goes about doing that exactly. Think about how many movies are unable to accomplish that same feat.

2014 has been an incredible year for genre movies, and it's because of people like Wingard and Barrett -- filmmakers who grew up on many of the best genre films ever made and understand how to make one that's special in the same way without just being a collection of riffs and references. The Guest is the movie in which Wingard's influences are the most apparent, but that's not a criticism. He's made a film infused with the DNA of Carpenter and Cameron but which stands on its own as an Adam Wingard film. This is a genre film that celebrates being a genre film in its every frame, from Robby Baumgarter's coolly removed photography to the incredible synth score by Steve Moore, which joins Jeff Grace's score for Cold in July and Jonathan Snipes work on Starry Eyes as one the year's best. 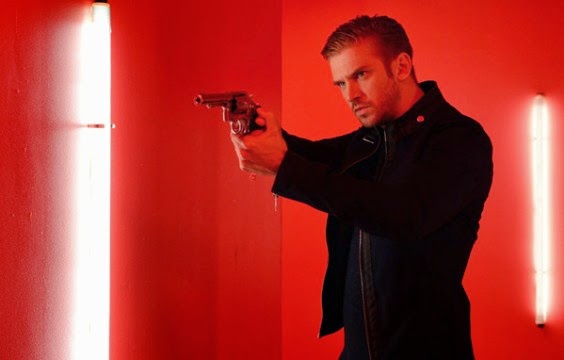 Like most of my favorite genre movies, The Guest manages to sneak in a bit of political subtext about the effects of war on soldiers and our treatment of veterans when they return home. There's also some stuff about bullying and about masculinity -- consider Luke's two father figures and what example each one sets. Mostly, though, it's a movie that works in the moment by celebrating being a movie and reminding us of why we love the Cinema of Cool in the first place. Like You're Next, it's very good at being exactly the kind of film it is, only a little smarter, a little funnier, a little more stylish than we typically get. It's a gift for genre fans.

While it's not the kind of thing that will be talked about come awards seasons (because it's not designed for that, unless the Academy begins handing out statues for "Best Chase in a Haunted Maze"), I can think of few other movies this year that do what they set out to do with the expert efficiency and fun of The Guest. Of course I love it. It pushes nearly all of my buttons. It's is one of my favorite movies of the year.


Posted by Patrick Bromley at 2:00 AM