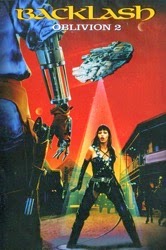 Is it possible to be disappointed by a movie I basically enjoyed?

Studios like Full Moon construct their brand identity with sequels and franchises. The more iconic characters they can create, the more often they can return to the well to give fans another taste of what they want (and, in the case of Full Moon, the more easily they can merchandise). That's why there are six (and a half) Trancers movies, four Subspecies movies (and one spin-off, The Vampire Journals), three Gingerdead Man movies, three Evil Bong movies, one Gingerdead Man AND Evil Bong movie, four Killjoy movies (and a fifth currently in production), two Demonic Toys movies and a crossover and no fewer than TEN Puppet Master movies. Charlie Band knows his way around a sequel.

Unfortunately, one of my favorite films in the Full Moon catalogue -- 1994's sci-fi western Oblivion -- had only one sequel, Oblivion 2: Backlash, released in 1996. It's easy to understand why there weren't more movies in the series; they were produced during Full Moon's partnership with Paramount, which dissolved just before this sequel was released (it's the last movie in the catalogue released under the 'Full Moon Entertainment' banner, which changed to 'Full Moon Studios' and, later, Full Moon Pictures). As such, there was more money to spend and it shows in everything from the western sets and production design to the impressive cast of recognizable faces. Backlash exists at a level most other Full Moon features don't.

After some quick "Previously on Oblivion" recap (it's actually not that quick, and recaps what seems to be every story beat from the first film), we're back in the Old West of outer space. Zack Stone (Richard Joseph Paul) is the sheriff of Oblivion, still unable to work up the courage to ask out Mattie Chase (Jackie Swanson). His deputy, the cyborg Stell (Meg Foster), is in the process of getting some upgrades. When Lash (Musetta Vander), former sidekick of lizard gangster Redeye (played by Andrew Divoff and killed in the original Oblivion) wins a Derconium mine in a card game, it makes her a target for both an aristocratic bounty hunter named Sweeney (Maxwell Caulfield) and Redeye's brother Jagger (Divoff again), who wants to control the Derconium for himself.

Like its predecessor, the best thing about Oblivion 2 is how energetic, colorful and fun it is. Reteaming director Sam Irvin with writer Peter David and all of the original cast, Backlash feels less like a fully-realized sequel than it does like an episode for an Oblivion TV series that never happened (just the thought of it makes me weep for what might have been, as this would have been a perfect property to adapt for a syndicated genre series in the '90s). That is both its blessing and its curse. On the one hand, it's one of Full Moon's best "hang out" movies -- we (I) like spending time in this town with these characters enough that we'll follow the little tangents the movie takes, like Zack and Mattie's slow-moving courtship or Stell's session with the drunken Doctor Valentine (George Takei, once again showing no flair for comedy nor interest in restraint). But they feel exactly like B-plots on a TV show; a feature film running just over 80 minutes probably shouldn't be devoting so much of its time to that stuff. 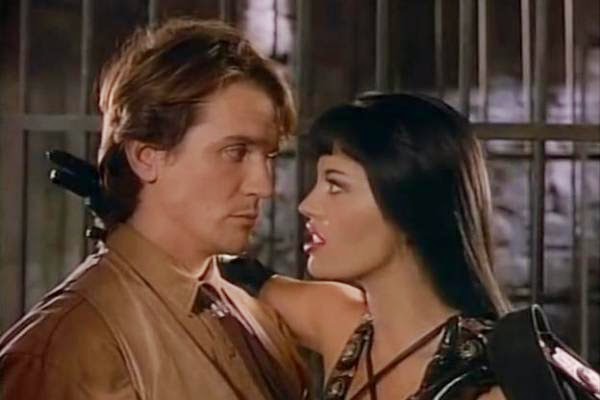 Nowhere is that more true than with Miss Kitty (played by former Catwoman Julie Newmar...and yes, these movies are obsessed with making in-jokes about the stars' former genre projects), who runs the town saloon/brothel. Though originally a supporting character in the first movie, cast presumably for the kitsch value her participation affords the series, Newmar somehow ends up taking center stage in Backlash. The problem with this is not that Newmar isn't up to the task -- she is -- but that it's indicative of some larger script issues the movie has. While Oblivion was a standard (but effective) Hero's Journey, Backlash can't make up its mind about whose story to tell. Episodic TV can (and does) devote a show here and there to one of the supporting players; movies don't usually have that luxury.

The decision to put Musetta Vander's Lash front and center is also problematic, as she's a character who works better as background color -- she's Boba Fett, not Darth Vader. But, like, a sexy Boba Fett. So, you know...Boba Fett. But the character is not meant to carry a movie, and thankfully Peter David's script doesn't require Lash to do so. We think she's going to be the movie's Big Bad, but instead she's cleverly made into the McGuffin. She's the thing everyone wants -- the Lost Ark of the Covenant. The problem arises when there's no one else who really fills the villain void left by Lash. The returning Andrew Divoff fails to make one fourth the impression he made as the very fun Redeye in the original film, probably because his twin brother (the kind of ridiculous conceit that I'm glad Backlash embraces) gets about a fourth of the screen time. He's not a factor in any way. Maxwell Caulfield's Sweeney is a much better foil -- not so much a villain as an antagonist -- because he carves out his own space in both the town of Oblivion and in Oblivion 2. He creates a character unlike any of the rest and forces new reactions out of the characters we know. He does exactly what this kind of character is supposed to do, and the fact that Caulfield's casting manages to maintain the level of kitsch the Oblivion movies have embraced makes it that much better. 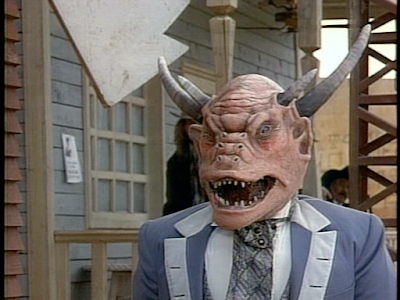 While I didn't like Backlash as much as the original Oblivion, it's not for the usual sequel reasons. The Law of Diminishing Returns doesn't necessarily apply. It's not a movie that drops off in quality as much as it pivots laterally, focusing on too many side characters until it becomes all too...disposable? If there were a whole bunch of Oblivion movies (or, you know, a TV SHOW), this would have been more acceptable -- we'd be willing to explore the fringes of the town and let our attentions wander. Because I dig the world and the characters, I'm willing to hang with Backlash even if I'm not sure it really works as a movie. Every major plot point rests on the shoulders of supporting players who don't get much development or make choices born out of anything we know about them. The plot drives the story, not the characters, but the plot is too much driven by the hand of the screenwriter.

My biggest frustration with Oblivion 2: Backlash is that it made me realize just how well-suited the material is for a TV show and I know that's never going to happen. The time for such a thing -- if there ever was a time -- has long passed. So while the movie is entertaining and fun, the direction bouncy, the screenplay clever and the cast an energetic assemblage of welcome faces, the movie never transcends the stakes and storytelling of episodic television. It's the kind of sequel that would somehow become much better if there had been more of them.

Buy Oblivion 2 on DVD through the link below and support F This Movie!