Happy New Year! Kick off 2015 with a whole bunch of streaming recommendations! 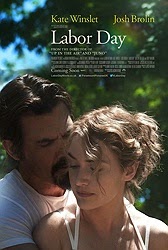 Adam Riske: Labor Day (2013, dir. Jason Reitman) It's pretty bad at times, but overall there are things to like in Labor Day -- namely the two lead performances. I think this movie is not necessarily underrated but perhaps unfairly maligned. You should at least watch it for the pie-making sequence. It's really funny. It's not supposed to be funny, but hell, you take enjoyment wherever you can, right? 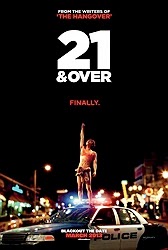 Adam Thas: 21 & Over (2013, dir. Jon Lucas, Scott Moore) I’m a sucker for the “drunk frat boy” comedy. Yes, I know many of you just instantly pegged me as a douchebag, but what can I say? 21 & Over follows three “used-to-be” best friends who get together for a night of partying on their friend Jeff’s 21st birthday. Inside of all of the dick and boob jokes, the movie is actually trying to be something more than just a “drunk frat boy” comedy. While it has a tendency to get crass -- as many movies of this genre do -- and falls into some stereotypes that I could have done without, the underlying theme of the movie explores the friends that we were once close to but no longer have very much in common with. There is your typical “Girl we like but has a boyfriend who ends up being a dick” and the “Uptight Friend,” but the movie breaks some common themes by making one of the main characters, Miller, one of the most unlikeable characters ever, and includes a pretty good scene where they need to get to the top floor of a frat party that almost feels like a parody of The Raid: Redemption. Overall, I found the movie fun. Even if it is far from perfect, I can appreciate the attempt. 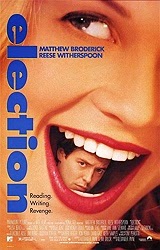 Doug: Election (1999, dir. Alexander Payne) I know everyone my age is currently streaming the entire Friends catalogue (now available!), but when you're tired of looking at Ross' pet monkey Marcel, I recommend you check out Alexander Payne's second feature-length film (the first being Citizen Ruth), Election. One of my favorite films from one of the best years in recent cinema memory, Election features pitch-perfect performances from both Reese Witherspoon (before she was the worst) as a hyper-ambitious (and annoying) candidate for student body president, and Matthew Broderick (in his last great role) as her resentful teacher-cum-adversary. The film also feature's Patrick's number one "Good Performances from Bad Actors" entry courtesy of Chris Klein as Paul Metzler. My point? It's a great movie filled with great performances. It's also hilarious. And sad. But mostly hilarious. Pick Flick! 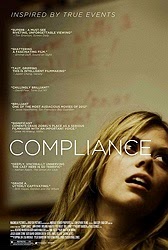 Erich: Compliance (2012; dir. Craig Zobel) Now that the warm and fuzzy holidays are out of the way, how about a cold splash of despair? This riveting film, based on a true story, is about a fast food employee (Dreama Walker) who is held and humiliated by her boss (Ann Dowd) because a prank caller pretending to be a cop accuses the girl of stealing money from a customer. Compliance doesn't so much twist and turn as slip inevitably down towards the worst human impulses. Although the story can be viewed as tabloid entertainment, the film takes on different meaning in the wake of the recent torture report and a national debate about police brutality. The prank caller (played by F This Movie! favorite Pat Healy) isn't a real cop. He says and demands things no real cop would, yet he's easily able to manipulate everyone involved — even those who suspect something's wrong. Compliance is tough to watch, but there's more to Zobel's (often restrained) adaptation than dramatic reenactment. It speaks to the culture of fear that has exploded in America during the past decade. If you think what happens in Compliance is unbelievable, you haven't been paying attention to the real world. 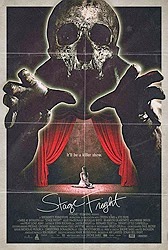 Heath Holland: Stage Fright (2014, dir. Jerome Sable) My second favorite movie of 2014 is one of the few releases from the year that you can find on Netflix. While not something mainstream audiences are likely to appreciate, I think Stage Fright has a lot to offer a community like ours. If you're into musical horror, you're in for a real treat. 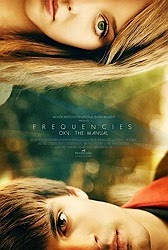 Patrick: Frequencies (OXV: The Manual) (2014, dir. Darren Paul Fisher) A fascinating, super low-budget science fiction romance that presents a world in which humans are assigned a station in life based on the "frequencies" they emit, which also determines who they can be paired with personally. Zak (Daniel Fraser) is a low born who is in love with Marie (Eleanor Wyld) and takes measures to see that they are together. That's just the beginning of the story, which continues to bend and twist in interesting directions for the entirety of its running time. It eventually loses the emotional component in favor of theoretical sci-fi concepts, which is too bad because the romance is one of the film's best aspects. But even as Frequencies gets more and more cerebral it never ceases to be curious and fascinating -- a testament to what can be done on a small budget if the script is smart and has something to say.
Posted by Patrick Bromley at 12:00 PM