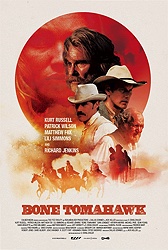 This is the year's most brutal film.

Bone Tomahawk isn't really a horror movie until it totally is. The debut feature from writer/director S. Craig Zahler is a genre lover's dream, existing at the intersection of John Ford and Ruggero Deodato. It is a western so savage that it may alienate many a traditional western fan. It's also fucking awesome.

Until things really start to go bad, it's one of the best classical westerns made in a long time. Patrick Wilson plays Arthur O'Dwyer, an everyman in the town of Bright Hope healing from a broken leg whose doctor wife is abducted by what is believed to be Indians. A rescue party is formed with Arthur, a prim, cocky gunfighter by the name of Brooder (Matthew Fox), Bright Hope's sheriff Franklin Hunt (Kurt Russell) and his simple, elderly deputy Chicory (the great Richard Jenkins), who set out on a dangerous journey in search of the abducted. What they find is far worse than anyone could have imagined. 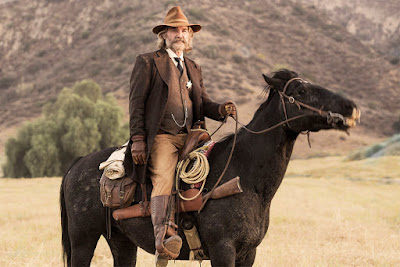 Bone Tomahawk is a movie isn't just a movie in three acts; it's practically three different movies, but each of them is very good and fits together with the others enough that it's never an exercise in pulling the rug out. The first act introduces a whole bunch of characters as it presents life in Bright Hope, and it's here that the movie resembles a classical western most: there's the stoic, no-nonsense sheriff, a drifter starting trouble, a saloon, the town fool, etc. It's all good stuff, anchored by another incredible straight-faced star turn by Kurt Russell, who just keeps getting better (and better looking) with age. Part of the charm of '40s and '50s westerns is seeing so many familiar character actors of the time pop up, and Zahler recreates that charm by filling the smaller supporting roles with recognizable genre faces like Sid Haig, Michael Paré, Sean Young and James Tolkan. It's an early indication that we're in good hands. It isn't the last.

The second and longest section of the movie recalls The Searchers as the characters traverse the hostile landscape in search of rescuing family kidnapped by some sort of "other." All four leads really shine here, each bringing something different and useful to the group with the exception of maybe Wilson, whose broken leg proves a huge hindrance but everyone implicitly understands that it's pointless to talk him out of making the trip. One of my favorite things about Bone Tomahawk is that the four leads are all meant to represent different facets of archetypal masculinity but that each is essentially decent and respectful; even Brooder, the arrogant racist, is allowed to be more hero than heel. I love that they are all practical in their decision making and how even though they lose their temper with one another at times, they immediately apologize to one another and acknowledge their mutual respect. This is as steely and tough as movies get, and yet Zahler retains a real sense of warmth and humanity throughout. 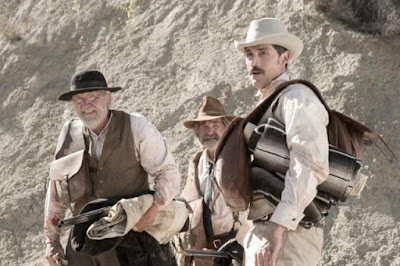 Much of that can be credited to Richard Jenkins, who once again proves that he's one of the very best actors currently working by turning what might be a fool on the page into the film's best character. Chicory is sweet and genuine, brave and wise but never in the obnoxious "folksy" way most movies would require him to be. And while the movie doesn't have a ton of levity in it, Jenkins has a couple of tossed off witticisms that are extraordinarily funny, probably made more so by the circumstances under which they are uttered. Kurt Russell may be Bone Tomahawk's gravelly soul, but Jenkins is its heart. It's one of my favorite characters he's ever played, and he's played a lot of great characters.

Patrick Wilson and Matthew Fox can't really hold a candle, comparatively speaking, but they do good work with what they are given. Wilson gives good everyman as a guy thrust into being a hero by necessity, and I especially love the way his broken leg is a constant obstacle throughout the movie. Not only is it a reminder of his weakness relative to the other characters, but a reminder of just how hard life could be in the Old West. Making that trip with a broken leg would be difficult in 2015, but back then it was a near impossibility. 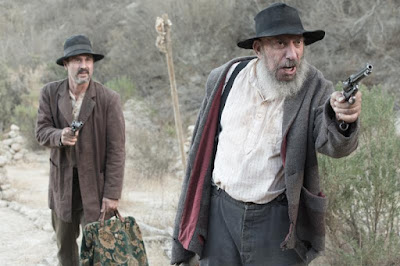 Bone Tomahawk won't be for everyone, but it's one of those movies that's really for the people that it's for. It's a great western before becoming an unrelenting horror film and would be impossibly grim if it wasn't also so human. I don't know how often I'll return to it -- the pacing is deliberately slow and the scope feels smaller than the traditional western -- but Zahler has made a confident, exciting directorial debut that may very well land on my list of favorite movies at year's end.