Riske Business: I Think I Love THE BYE BYE MAN 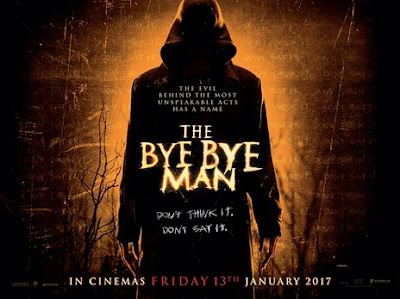 What started ironically has become genuine. This column will contain spoilers.

I saw The Bye Bye Man in theaters on an upsetting January night. I had heard it was bad and I was looking for something stupid and ironic to watch to cheer myself up from real-world and personal life events that were bothering me. That night, The Bye Bye Man turned out to be just what I needed. It was a bonkers movie I was able to enjoy in a big theater with about thirty other people who were all as perplexed as I was at what we were watching. I bag on the theatrical experience a lot, but I know in the case of The Bye Bye Man the audibly confused crowd added to my enjoyment of the movie. For a few months, I was afraid to re-watch The Bye Bye Man because I didn’t think it could ever match that initial experience. But then I started thinking about the movie a little bit, then a little bit more and then so much that I needed to see the unrated version for myself. I was willing to risk breaking the spell it cast on me that January night.

I’m glad I did, because I’m now an unabashed fan of The Bye Bye Man. 2017 will mark the year in my horror fandom where I became a fan of the “reject” horror movie. All of the horror movies that most genre fans roll their eyes at and think look dumb have suddenly become endearing to me. For example, when I saw Wish Upon there was a trailer for an upcoming movie called Friend Request, which is about a woman who pity follows an outcast on Facebook, unfriends her, the outcast kills herself and then comes back from the dead to kill everyone on her Facebook friend's friend list. It’s an amazingly stupid premise and also one that makes total fucking sense for a 2017 horror movie trigger. And I’m not just looking forward to Friend Request. I want to go back and see other reject horror movies I missed from the 2000s like FeardotCom, Darkness Falls, Boogeyman, etc. I need these in my life! The Bye Bye Man fits right in with that lot and that is part of its charm for me.

The plot in brief: The Bye Bye Man tells the story of Elliott (devoted uncle and college student on an academic scholarship at Buchanan Williams University), his girlfriend Sasha (played by the awesomely named Cressida Bonas) and his best friend John (played the even better named Lucien Laviscount), who move in together into a massive off-campus house. What the trio doesn’t know is that the house was once a thing of local history and the hotbed of Bye Bye Man activity. They are flying too close to the sun, you see. Toss in a sexual psychic, Carrie-Anne Moss, hallucinations, Leigh Whannell, library research and Faye Dunaway and you have one of my favorite movies of 2017 so far. 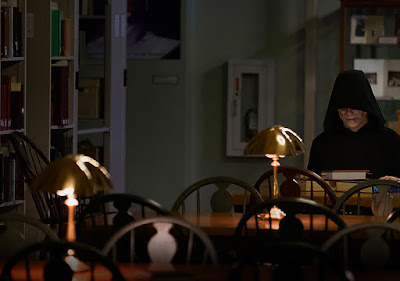 The Bye Bye Man is a real tale of two cities in that half of it is really unintentionally funny and the other half is moody and effectively sad. I think that’s why I’m no longer an embarrassed fan of the movie and instead a genuine one. It is always giving you something. I’ll start with the non-ironic stuff first. I’m an uncle. The Bye Bye Man has one of the best depictions of uncling I’ve seen in recent years. Elliott is sympathetic to me because he’s a fucking solid uncle. It’s like he talks down to his niece, Alice, but he doesn’t talk down to his niece, you dig? He also seems to have a really loving, supportive family, including his brother Virgil (Michael Trucco, who looks like Dane Cook when he was in Dan in Real Life and all supportive and it made you uncomfortable because you’re all “Normal Cook is weirder than weird Cook”). The movie feels like it has stakes because even though the characters are not the best, their relationships to each other feel lived-in and like they have love and history. I’m telling you, The Bye Bye Man is sad. The Bye Bye Man doesn’t punish just the wicked. He punishes indiscriminately. The score is also quite good. It is by The Newton Brothers, who apprenticed under Hans Zimmer and also scored Oculus and Ouija: Origin of Evil. They know what they’re doing! Other things that are good about The Bye Bye Man include the makeup effects on the titular character by Robert Kurtzman (yes, the director of Wishmaster) and played by the awesome Doug Jones, who I met in real life and is a very nice man; the lack of jump scares (this one is more about mood); the hallucinatory aspects of the movie, making it feel dreamlike (I think I saw a flash cut of naked butts on train tracks but I’m not sure) and a great scene that comes out of nowhere in which Elliott is questioned by Carrie-Anne Moss’ detective character that is grounded and well-written. This movie has some good stuff in it.

But The Bye Bye Man’s secret sauce is all the WTF moments it has. I’ve prepared a list:

• The movie introduces Elliott, Sasha and John meeting up on campus about to go to their newly rented home. John, out of nowhere, just declares “Today is a good day” sort of wistfully as he looks away from his friends and into the distance. It’s very funny.

• John establishes backstory for Elliott by basically saying “Remember that crash that killed your parents? I got you, because you’re my boy.” Then they do a handshake-hug. It’s weird because it’s just for the audience, as the only people in the scene are the two of them and Sasha, who knows enough about that crash to know Elliott’s rule to not tell anyone about that crash.

• They rent a fully furnished house but the rooms are empty because the furniture is all crammed in the basement. So they have to move all of the furniture out the basement and back into the rooms they were presumably in before? I mean, sure, I guess.

• Elliott makes Sasha a card, but instead of writing it he has apparently cut single words (sometimes single letters) out of magazines and stitched them altogether. It’s like a serial killer letter. She seems unfazed.

• The Dane Cook uncle lectures Elliott at a housewarming party about keeping his options open and basically fucking around while he’s in school (because he didn’t do that and wishes he did) even though Elliott tells his bro that he’s in love with Sasha and wants to marry her and have kids with her just like his brother has with Elliott’s sister-in-law and niece. Elliott’s brother says flat out “What I have is great, but I missed out on all this.”

• In the same conversation, Virgil says to Elliott something like “You have a scholarship. You should be upstairs studying right now” even though they’re at a party and Elliott is already established as being responsible. P.S. If you have a scholarship and are not studying…fuck you!

• All the while, Elliott’s niece, Alice, is wandering around an adult party where people are playing drinking games and canoodling.

• If drinking and dancing weren’t enough, Sasha invites over a friend named Kim (Jenna Kannell) to do a psychic cleansing on the house and “burn some sage or something.” Kim does and there’s also a post-party séance! But wait, not before playing baseball outside even though it’s winter? And the baseball consists of about a dozen people standing within fifty feet of each other? This party is off the chain! 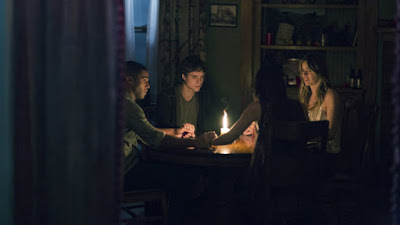 • The day after the séance, things get weird (it was interrupted by a Bye Bye Blackout). Sasha gets a bad cold (she coughs twice and goes “Oh G-D,” it’s funny), John has limp dick when trying to have sex with Kim (she suggests they try again, but John hallucinates worms coming out of her eyeballs and that’s a bad look so no-go) etc., etc.

• After more Bye Bye Man shenanigans, Elliott does what all these movies do – goes to the university library for research! He tries typing “Bye Bye Man” in Search.com (I love non-sponsored cinematic search engines) and get a result of “Files Found: 0,” which has never happened when someone used a search engine. Then a librarian helps him search the Bye Bye Man’s history in the library’s restricted files but instead of just showing him to the files, she hangs out (like a detective) while the two of them try to crack the case. What?

• Meanwhile, Sasha goes to the house’s landlord to ask him about the spooky doings happening at their humble abode. He works in a hothouse and his name is Mr. Daizy (sigh). Sasha says “Mr. Daizy, you know that house you rented on so and so street…” and he’s all “Oh yeah, the two handsome guys!” Sasha then says bluntly “You have a weird house. Really, it’s awful.” Mr. Daizy is all “Well, you signed a lease.”

• About midway through the movie we see The Bye Bye Man’s sidekick dog, which is a CGI effect straight out of 1997’s Spawn. It looks like a moving snowman made out of meatballs.

• Later in the film, the librarian calls Elliott because SHE DID MORE RESEARCH and THE LIBRARIAN SHOWS UP BY NAME ON HIS CALLER ID! Are they fucking? The librarian later goes crazy and Elliott hits the shit out of her with his car as he hallucinates.

• As Elliott slowly deteriorates, we see him maniacally singing the song “Bye Bye Love” to himself in his car. It’s hysterical and shows that apparently The Bye Bye Man fucks with your radio, too.

• The movie makes up Bye Bye Man rules as it goes. Late in the movie, it is established that you’re doomed if you see the hound or hear the coins. Wait, what? The coins are a thing now?

• The dog starts eating people’s heads after they fall to the Bye Bye Man.

• The movie closes with Elliott’s niece maybe in danger (she has Bye Bye coins on her and has read the words “The Bye Bye Man” etched in a nightstand, so she can’t say it or think it or the Bye Bye Man will spread). The niece mentions to her dad that she saw something etched in the nightstand and the dad says “What was it, honey?” She goes “I can’t read in the dark. What do you think I am – a FLASHLIGHT?” Wah-Wah! Crisis averted. This house is clean. Or is it? 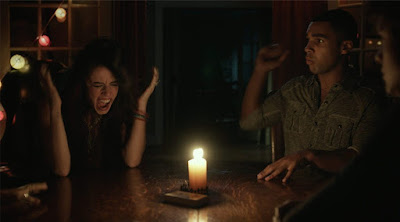 Then this wonderful movie ends and I immediately want a follow-up. I’m not sure any of you will like The Bye Bye Man as much as I do, but I hope this proves a helpful primer. Sincerely, I think if this weren’t marketed as a dumb horror movie but were instead an episode of a TV horror anthology people would talk about it years from now affectionately. They would say “Remember that episode with The Bye Bye Man? That used to freak me out when I was a kid.” I’m not saying The Bye Bye Man is better than Alien…but I would rather watch The Bye Bye Man than Alien. It’s worth a blind buy, man.*

*It’s not. I just couldn’t resist the pun.