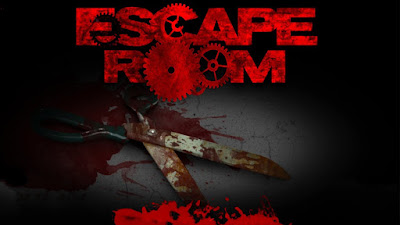 I like writing this column. It’s good exercise, and I like that it’s kind of becoming my “thing” here at F This Movie!. Digging through these misfit oddities makes me both a better writer and a better critic, and I look forward to being first though the door on the cult favorites of the future (You and I both know that someone, somewhere will declare November Criminals an “underrated gem” on a podcast someday). And while this week’s pick comes courtesy of our own Adam Riske, I’m generally getting better at picking movies, too. Not quality-wise, mind you. Potential. I don’t just go after what looks bad — the whole “so bad it’s good” thing is fun, but it’s not all that productive. This isn’t a “bad movie” column. I’ve done my best to highlight worthwhile fare like Their Finest or Nerve just as much as I’ve dissected the baffling incompetence of Life on the Line or The Last Face*. Schadenfreude is not the goal, here. The goal is to weed through an oft-untapped pipeline for the niche, the compelling, and the peculiar. 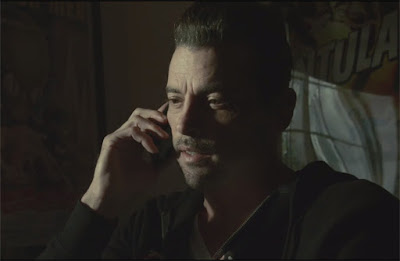 Escape Room surely meets these criteria. Marketed as a Saw clone featuring Scream’s Skeet Ulrich, it reaches for both ideas without ever really grasping either one. Ulrich is Brice, proprietor of an award-winning Los Angeles escape room called Deranged. Though it was once the hot new scene, Deranged is fading fast, so Brice hits an occult shop run by Ramona (Sean Young) in hopes of sprucing up his place with that extra something special. It’s there that he finds Jumanji the ancient and mysterious Death Box, a cursed artifact full of ancient magic. Ramona warns him off it, but Brice absconds with the piece just in time for Deranged’s opening weekend. The first (and only) clients are horror nerds Ben and Jeff (Matt McCoy and Randy Wayne) and Their Girlfriends Jess and Angie (Christine Donlon and Ashley Gallegos). As the boys debate the virtue of modern horror (more on that later) and Their Girlfriends snap and tweet (because girls, apparently), Brice prepares to unleash the kind of terror that will put Deranged back on top.

Well, sort of. The escape room’s theme is “killer hillbilly,” so the Baghead Jason chained to the wall does most of the terrorizing. He’s hidden in a dark corner for the first part of the game, held back by a chain that loosens as time goes on. Every ten minutes, he gets a little closer. The faster they solve the puzzles, the less ground he gains. You get it. This is all in good fun until Baghead goes off script, ripping out the security cameras and knocking off the players one by one. Is it insanity? Is it the Death Box? Is it Ben’s insistence that You’re Next is overrated? All we know is that — despite running the room to-tally blind, a clear violation of good business and safety practices — Brice refuses to intervene until the game ends. Jeff is a prominent horror blogger, you see, and his bad review might bury Deranged for good. Instead, Brice bickers with assistant Molly (Hayley Goldstein) while the foursome trapped inside try to complete the game before the big bad gets within knife’s reach. As you might imagine, there are complications. 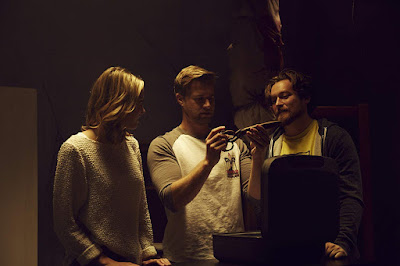 Trouble is, they’re not that interesting. Brice is no Jigsaw; there’s no scheme, no life lesson to be learned, and Ulrich is left with little to do after the first fifteen minutes. He mostly bangs on the desk in frustration, occasionally pacing up and down a hallway and staring into a strobe light for dramatic effect. He has zero connection to the chaos inside the room, and the degree to which writer/director Peter Dukes tries to justify his sidelining stretches all logic and reason (though, in fairness, never snaps it entirely). We understand why he doesn’t want to end the game, but it’s hard to imagine anyone being this careless. Nor are we exactly rooting for our protagonists. Ben and Jeff are post-modern horror characters, you see, going toe-to-toe over Carpenter’s The Thing and whether or not The Shape cries in Halloween 5. Dukes clearly sees himself as the lone custodian of classic horror in a trendy and fickle scene, saddling the more modern Jeff with Bad Takes and problematic gaps in his credibility. This would be interesting if Escape Room had anything to contribute to the genre. Instead, it’s amateurish and embarrassing.

Speaking of which, Escape Room is an irritating example of what I refer to as an “LA People” movie. Not only is it made by someone trying to hustle their way into the biz with a high-concept script and cameos from former A-Listers strapped for cash, but it’s laced with references to Hollywood culture — Ben and Jeff have a screenplay (everyone in Hollywood has a screenplay), and the frequent nods to pilot season and other Industry touchstones will alienate anyone who doesn’t find LA people as adorable as they find themselves. With due apologies to LA people, you know exactly what I’m talking about. It’s not that I’m simply too quaint or provincial, either. Some of the greatest movies ever made have been about the ups and downs of Tinseltown, and I know enough about how the sausage gets made to enjoy watching it happen. But there’s a difference between using a setting to shape a narrative and using it as color because it’s all a writer knows. If it’s meant to teach us about the business, it fails. If it’s meant to endear us to the characters, it fails even more. 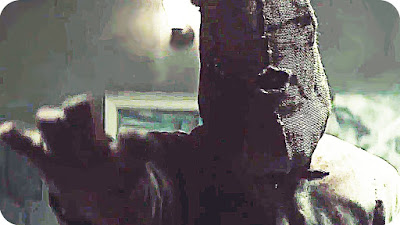 And while Escape Room is a failure, it’s at least notable as part of an emerging trend. Searching “Escape Room movie” will yield multiple results, including an upcoming 2019 version starring Logan Miller and Deborah Ann Woll. Escape rooms have become a thing in many major cities, and — like social media, “extreme” culture, and the dark web before it — they’re ripe with possibilities for the horror genre. Whatever that movie will be, though, it’ll have to do better than this. The lock-and-key puzzles Brice implements are generic and bear no real thematic connection to, well, anything else going on in the movie. They tell us nothing about him except that he’s a poor businessman who gambled his savings, marriage, and future on a pair of bloody scissors and a combination lock set to “666.” Why not go Clue with it? Design a room that exposes the players’ secrets. What about Would You Rather? I didn’t love that movie, but it played with its premise in a creative way. There’s something to this escape room idea. We just have to find it.

*The worst movie I’ve ever seen
Posted by Patrick Bromley at 5:00 AM