“By the time the world’s greatest detectives figure out whodunit….you could die laughing!”

Murder by Death is a true 1976 gem. Written by the great playwright and author Neil Simon and starring an eclectic cast of talented and funny actors, the film lampoons the classic “old dark house” murder mystery with irreverence and affection. All the tropes and clichés of the famous detective stories from Agatha Christie, Dashiell Hammett, and Earl Derr Biggers are lovingly played to their most absurd extremes by characters who are only loosely modified or exaggerated from their literary and cinematic inspirations.

The world’s greatest detectives have been invited to an old country manor where they are promised dinner and a murder. Unable to resist, everyone converges at the location for a chamber mystery with twist after twist, where no one is who they seem, and nobody is above suspicion. Comparisons to the 1985 movie Clue are absolutely unavoidable because in many ways, Murder by Death and Clue have the same goals and achieve the same things. I like to consider Murder by Death the cool older uncle of Clue. 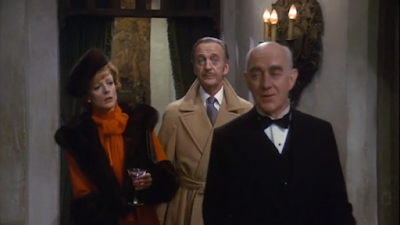 The humor comes from the dialog and its delivery by the actors themselves, and watching the huge ensemble cast play off one another is one of the great pleasures of this movie. Peter Falk (The Princess BrideMan of La Mancha) is Perrier, based on Agatha Christie’s Poirot. Elsa Lanchester (The Bride of Frankenstein) is Miss Marbles, aka Miss Marple. David Niven (1967’s Casino Royale) is Dick Charleston, aka Nick Charles, the Thin Man. In the film’s most controversial role, the great Peter Sellers (The Pink Panther) dons some eye prosthetics and goes full yellowface. More on that in a bit.

Of equal importance are the non-detective roles, which are filled by the likes of Eileen Brennan (erm…..Clue), a very glamorous Maggie Smith (Professor McGonagall from the Harry Potter films), James Cromwell (L.A. Confidential), Richard Narita (Drop Dead Gorgeous), Nancy Walker (Girl Crazy) as a mute maid, and Sir Alec Guinness (The Bridge on the River Kwai) as a blind butler named Bensonmum. In the film’s weakest casting, Truman Capote plays the eccentric manor lord who has orchestrated the entire evening. I say Capote is the weakest link because he’s clearly out of his depth when compared to the great acting talents with whom he shares his scenes. His co-stars make everything look effortless. Capote, while perhaps a great author, doesn’t appear to have any acting ability. 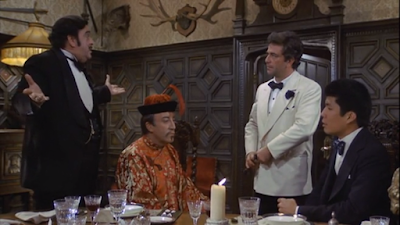 Phew! With that out of the way, I can focus on telling you why Murder by Death is such a cool little movie. For starters, at no point does this film ever take itself seriously. AT ALL. While technically this is a murder mystery, that’s not really the focus of the story, which instead seems to take great joy in allowing these eccentric characters to play off one another at every possible chance. This movie has some of the funniest lines ever. Here’s one of my favorites: “He was arrested in 1932 in Chicago for selling pornographic Bibles. The D.A. couldn’t make the charge stick when the church refused to turn over the Bibles.” It’s just line after line after line. If you check out for just a moment, you’re likely to miss several jokes. They don’t all land, and some of them are better than others, but Neil Simon wins us over by sheer volume of laughs. It’s also hard not to laugh when the movie is so cheeky and clearly isn’t taking anything seriously.

Every corner of this movie is populated by fun. There’s a doorbell that sounds like a scream; the blood-curdling shriek belongs to Fay Wray from 1933’s King Kong. Even the opening credits are fun, listing the cast as “starring in diabolical order.” The names of the actors play over delightfully-creepy character drawings from Charles Addams, the man behind the comic strip The Addams Family.

That sense of fun translates to the story and the performances. I’ve certainly never seen Sir Alec Guinness be so silly. I always associate him with very serious dramatic roles, but he’s absolutely goofy here, playing the blind butler with relish. Without spoiling anything, Guinness also gets to stretch out into some completely absurd territory, and seems to be having a blast. It flies in the face of the stories I’ve heard about him over the years that he was dour and bitter, but maybe that all came later. It’s also worth noting that this was his last screen credit before his life changed forever the following year when he starred as Obi-Wan Kenobi in Star Wars. 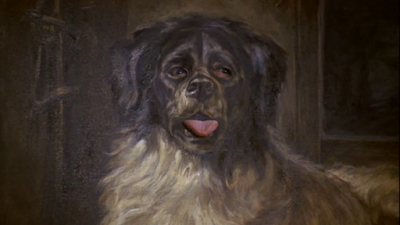 Also, I’ve often stated that an actor’s success during the seventies was measured by how many times they got to guest star on TV’s Columbo. Well, this movie stars Columbo himself, Peter Falk. As my careful research would indicate, Peter Falk appeared on EVERY episode of Columbo, so that would make him not only the biggest star of this movie, but also of the entire decade. No, but seriously, Falk is in rare form here, chewing the scenery and having an absolute blast. The actor is already fun to watch in general, maybe because he always has a sly twinkle in his eye, but it’s even better here because there are no limits to how big he can go. He’s having fun, and therefore we are too.

Now let’s tackle the elephant in the room. Peter Sellers does indeed play a Japanese character, inspired by Charlie Chan. Considering that the character’s son is played by an actual Asian American (Richard Narita), it’s clear that Sellers is cast here as a send-up of how classic Hollywood approached Asian characters by using white actors under makeup. He even does the stereotypical Asian voice and says lines like “Conversation like television set on honeymoon: unnecessary.” Is it offensive? Oh boy, yes. But I also think that everyone involved in this movie was well aware of how offensive it was. In a movie as meta as this one, Neil Simon and director Robert Moore seem to be poking fun at the Hollywood tradition of casting Caucasians as Asians. True, it seems like they’re trying to have their cake and eat it too, but I don’t think we can for a second assume that the movie is not being critical of the practice. It’s not cool in our modern society, but I’m pretty sure it wasn’t cool in 1976, either. This movie is poking fun at classic murder mysteries, so why not poke fun at one of the oldest murder mystery tropes along the way? Who better to send up the practice than Peter Sellers? 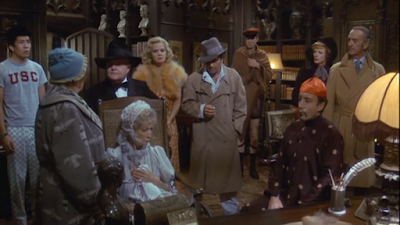 Murder by Death debuted in U.S. cinemas on June 23, 1976 alongside Logan’s Run. The prior weekend had seen the theatrical debut of the Mel Brooks comedy Silent Movie and the next seven days would see the release of both The Omen and The Outlaw Josey Wales. Can you imagine? Murder by Death is one of those movies that seems to fly under the radar, especially as we get further from the video store days and syndicated television, with streaming services offering an ever-narrowing selection of films. Thankfully, Shout! Factory has scheduled a long-overdue Blu-ray release for this movie mere months from now. There is also a pseudo-sequel, The Cheap Detective, which reteamed writer Neil Simon, director Robert Moore, and much of the cast, including Peter Falk as the title character. With an irreverent sense of humor and some of the funniest actors in film, Murder by Death was a hit in 1976, and it’s still worth watching all these years later.