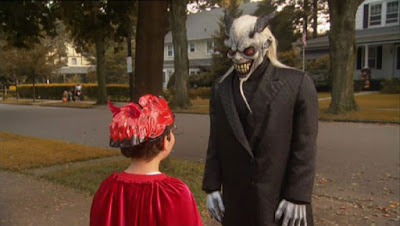 Celebrate the best holiday of the year the way it's meant to be celebrated.

I may program them year round in this column, but October is really the month for 24-hour movie marathons. And I know we're a few weeks away from Halloween (a day I'm already dreading because it signals the end of #ScaryMovieMonth), but I thought it might be fun to get in the spirit early by programming a whole day and night to our favorite holiday. I did my best to avoid some of the most obvious choices, but there are still a handful of no-brainers on here. Sorry about that. 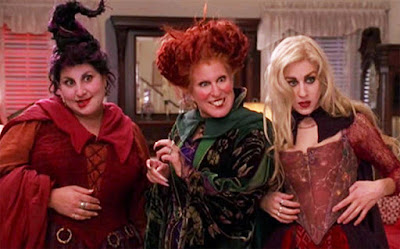 I figure we should start things off with a Halloween classic that is beloved...though not by me. Listen, I have nothing against Hocus Pocus. I just have nothing for it either. I'm not even positive I've seen the whole thing, to be honest, and if I have it certainly wasn't in one sitting. Programming it first allows us to start with something that's a little softer but still has all the right atmosphere, and it will force me to watch it start to finish. Please don't riot or beat me up. 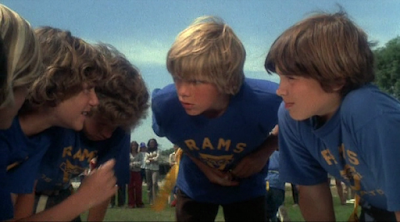 Technically, this isn't a "Halloween" movie. There's only one scene set at Halloween, but it's a scene that's responsible for making horror movie history: when watching the reaction the Halloween scene got from audiences, writer/director Don Coscarelli decided he wanted to make a horror movie and Phantasm was born. I've never actually seen this and it's almost impossible to come by these days (the DVD is long out of print), so putting it in our marathon will force me to find a copy...by any means necessary. If that sounds like a threat, it is. 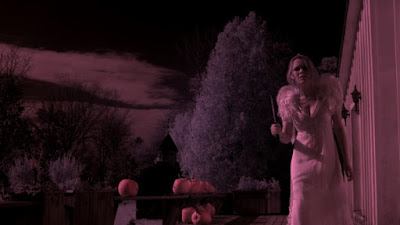 I saw this as part of the Bruce Campbell Horror Festival (now Cinepocalypse) a few years back and can remember falling in love with the first half hour, which perfectly captures the feeling of Halloween. Then things keep getting weirder and director Bruce McDonald (Pontypool) starts applying a pink filter to everything (see photo) and the movie lost me. I haven't revisited it since then, but I plan to this October. Now I will have to! I know our friend Chaybee is a fan. 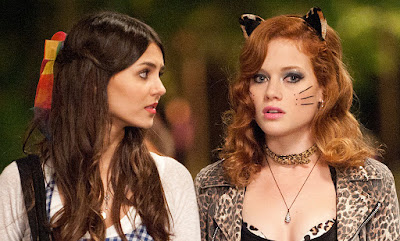 With the exception of Hellions, our entire marathon so far has been comprised of kids' movies. Let's keep that train running with Fun Size, a movie Rob DiCristino insisted I watch and never stops talking about. It's a "one crazy night" teen comedy produced for Nickelodeon Studios and directed by Josh Schwartz, creator of The O.C. and my beloved Chuck. It's not especially funny, but it gets a pass for three reasons: 1) It's set on Halloween; 2) Jane Levy is in it and steals every scene, proving she should be the lead and not Victoria Justice; 3) There is a character named Keevin. He's Rob's favorite. 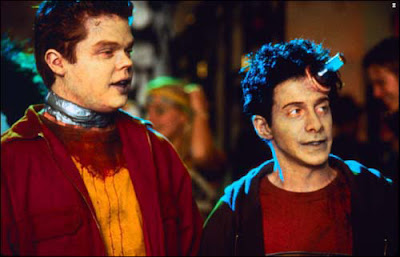 Ok, let's finally take the training wheels off and get good and gory with this 1999 horror comedy that dares to ask the question: "What if that one section from Evil Dead 2 met up with that one subplot from An American Werewolf of London and then was stretched to feature length?" It's bloody and energetic and really fun because Rodman Flender knows just how to direct this combination. The only thing holding the movie back is an appearance by The Offspring, who have always been the worst. At least Idle Hands has the good sense to tear the tops right off of their heads. 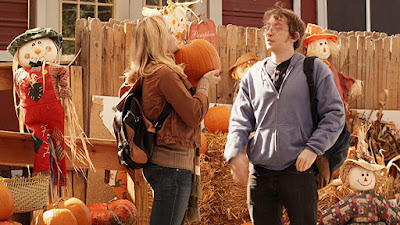 Ok, now that we have some gratuitous sex and drugs and violence out of the way, let's soften things up once more for Emily Hagins' very sweet love letter to Halloween. Tony Vespe plays a high schooler who's probably too old to still be celebrating the holiday the way he does, but loves it too much to let it go. Many of us can probably relate. There are a few subplots that probably aren't needed, but the movie has too big a heart for me to not like it. Plus, Katie Folger reminds me of '80s Elisabeth Shue in the best way. 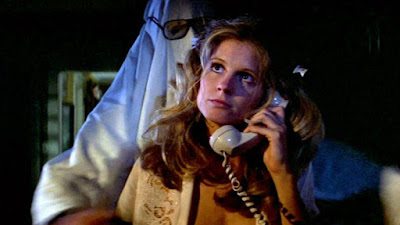 I tried too avoid too many obvious choices for this marathon, but there's no real sense in programming a 24-hour marathon of Halloween movies that isn't built around the original Halloween. With the new sequel coming out (apparently I'm the last person alive who hasn't already seen it), it's a good time to revisit the original. Plus, the primetime slot should hopefully draw the biggest crowd, and this one is guaranteed to be a hit. 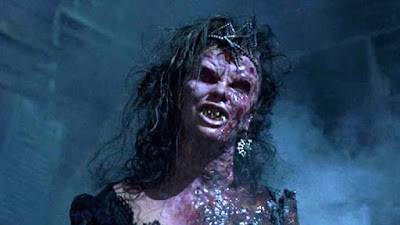 Hopefully the Halloween crowd sticks around for my second most obvious pick, because Night of the Demons is the kind of movie that plays best with a crowd. The movie is a total blast, representing so much of what is fun about '80s horror and capturing a side of Halloween few movies outside of this and Trick 'r Treat have managed to capture. When I was in high school, I used to carry around a picture of Angela to freak out my friend Jennifer. I'm pretty sure she's still freaked out. 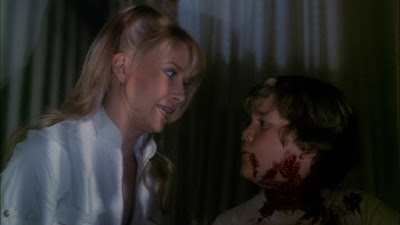 One of the more obscure titles in our marathon so far is arguably the least known movie to have the words "trick" and "treat" in the title. While not an anthology, there are a couple of different stories taking place in this weird little movie, including a babysitter stuck watching a kid who keeps playing pranks on her and Peter Jason as an institutionalized psycho trying to get back home to murder his wife. David Carradine literally phones in a performance as a guy whose entire role takes place on the phone. Steve Railsback shows up because he owes someone a favor. Ever want to see Peter Jason in drag? This is your movie. I think it might be a little too dull to program overnight, but it should play pretty well here. 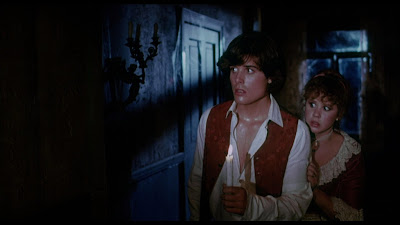 Once a forgettable '80s slasher, Hell Night has now become a beloved cult classic thanks to the passage of time and little else. Ok, too harsh. It's fun! Linda Blair and legendary cocksman Peter Barton are among the college kids spending the night in an abandoned mansion that's also housing a mutant killer. That last part is what sets Hell Night apart from a lot of other '80s slashers; like my favorite Tobe Hooper movie The Funhouse, it offers a killer who's more monster than man. Like Trick or Treats, this will play better the later it gets. 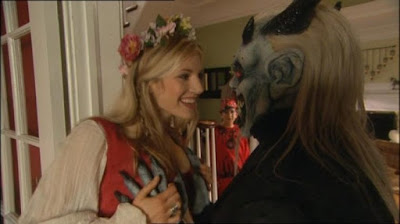 Without a crazy Italian movie to program in this slot, I'm going with the craziest Halloween-set movie I can think of. This horror comedy features a masked murderer walking around on Halloween and killing people with a little kid at his side. I did not love this when I first saw it years ago, but is has built up something of a reputation in our little website circle since. If nothing else, I'll probably be able to convince Adam Riske to join me in the middle of the night. 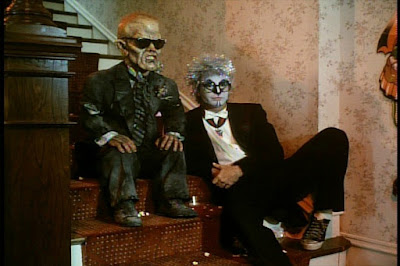 Another first time viewing for me! And it's another movie our friend Chaybee has been talking up for years! I feel like I remember this TV movie airing when I was a little kid, but have somehow missed it my entire life. The cast is pretty incredible: Lee Montgomery from Girls Just Want to Have Fun, Shari Belafonte, Kurtwood Smith, LeVar Burton, Kevin McCarthy, Peter Deluise from 21 Jump Street, and Dedee Pfeiffer from all of my daydreams. This one is hard to come by commercially too. I've really got my work cut out for me with this marathon. 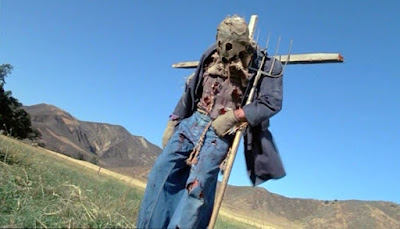 Let's follow up one TV movie with another TV movie. A developmentally disabled man is murdered by some local rednecks (among them Charles Durning and Lane Smith), then returns to take his revenge in the form of a scarecrow...maybe. Yes, the characterization and performance of Larry Drake's character Bubba is crazy misguided, but the movie has a surprising amount of atmosphere and edge for something made for television in the early '80s. I'm mostly programming this one here because I once watched it in roughly this same time slot during a 24-hour marathon Doug and I did and it worked really well. If it ain't broke. 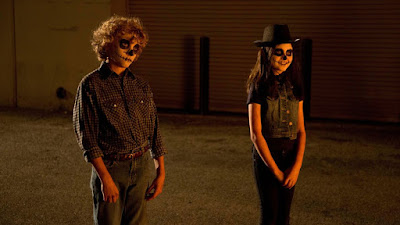 I know that my last most obvious choice should probably either be the first or final movie in our marathon, but I don't want to end on this one. This anthology is one of my favorite Halloween-themed movies ever (in particular Dave Parker's "Sweet Tooth," one of my favorite anthology segments in any horror movie ever made), but even I have to admit that it fizzles out rather than ending with a bang. It's not that I don't really enjoy the Neil Marshall segment that ends Tales of Halloween, just that the last moments don't pack the punch I want to wrap up these past 24 hours. Second to last is a good spot. 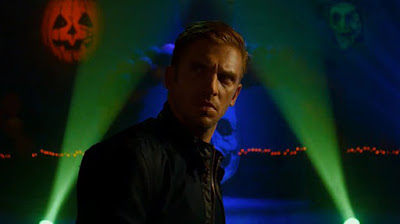 Here's the note on which I want to end. While not totally a Halloween movie, the last act of Adam Wingard's great action/horror hybrid is a great Halloween sequence. Dan Stevens is a soldier who visits the family of a friend killed in combat, only something is...off. How this movie didn't make Stevens a movie star, I will never understand. If we're dragging at all after 24 hours of watching movies, this one is entertaining enough to perk us right back up at the end. Plus, it's going to give us what I think might be the best final line of dialogue of any of these movie marathons to date.
Posted by Patrick Bromley at 5:00 AM