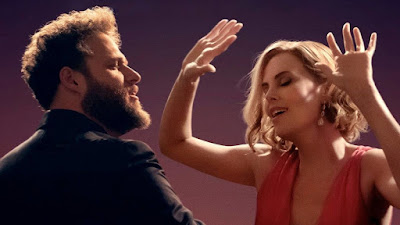 Saving the romantic comedy, one f-bomb at a time. 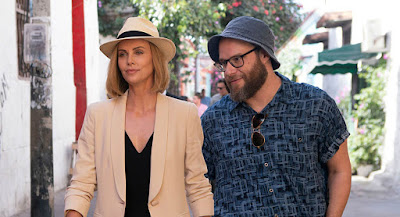 Seth Rogen reteams with director Jonathan Levine (50/50, The Night Before) for another smart, sweet film about people navigating relationships under difficult circumstances. This time out he's Fred Flarsky, recently unemployed journalist who winds up in the employ of Secretary of State Charlotte Field (Charlize Theron), who he knew as a kid when she would babysit for him. Charlotte is getting ready to announce a presidential run, and Fred is brought on as a speech writer in an effort to make her seem funnier and more likable. Though they come from different worlds on the surface, the pair find themselves drawn to one another and eventually strike up a romance, much to the dismay of Field's handlers (June Diane Raphael and Ravi Patel) and, more than likely, the American voters.

Romantic comedies don't need much to succeed - just likable stars who share chemistry, decent dialogue, and some wit. By this measure, Long Shot is a good romantic comedy. It presents us with two people who genuinely like each other and allows us to understand their connection, rather than thrusting them together because they are movie stars and the screenplay dictates that they fall in love. It offers another Seth Rogen character who is smart and funny but abrasive and somewhat immature, but this time the machinations that force him to grow up aren't just limited to his character. He's standing in for so many of us who cling to our ideals and our principles and who are unwilling to accept the way the world truly works, but it doesn't break our hopes in a way that's cynical or shitty. The movie simply forces Rogen (and, by extension, those of us who identify with him) to see that things aren't so black and white, good or evil. There's something grown up about the way Long Shot tells us to grow up.

Seth Rogen is a seasoned pro when it comes to material like this: smart, honest, funny, littered with jokes about taking drugs and masturbating. Charlize Theron is the real discovery here -- that is, for anyone who doesn't remember her stellar work in the extremely underrated 1997 comedy Trial & Error. She so rarely gets to appear in anything light, especially romantic comedy, that watching her flex those movie star muscles is a joy. Rogen brings out a playful side of her, and she pushes back and forces him to step up as an actor (though I've always found him to be a very good, very natural, very underappreciated actor). She's not given some stereotypical romcom "flaw" (she's impossibly beautiful and successful, but what a klutz!) and is instead allowed to be a real person inside of a demanding, difficult job she can barely remember wanting to do. She's great.

Despite taking place in the political sphere, the movie doesn't make any especially salient political points: the people at FOX News are a bunch of morons, Rupert Murdoch is an evil bastard, voters tend to care about the wrong issues, etc. There's not much about the politics of Long Shot that we haven't already heard (except that it is possible for Democrats and Republicans to be best friends). And, yet, there is messaging underneath the text that makes the movie perfect for 2019. At a time when insincerity is everywhere -- in government, on Twitter, in our pop culture -- along comes Long Shot to say that things would be better if everyone could just be honest about how they feel. That probably doesn't sound revolutionary, but in 2019, it hits so hard. It's especially revolutionary in the romantic comedy genre, which almost always depends entirely on characters not saying the things they should say so that a bunch of stupid misunderstandings can propel the plot. There's a scene that brought me to tears in which a character leaves a voicemail and says exactly what's in his heart, not because he's doing damage control but because he's in love. Even a potentially lame sequence in which Theron has to broker a hostage situation while high on Molly is saved because it's really a scene about two people being honest about how they feel. 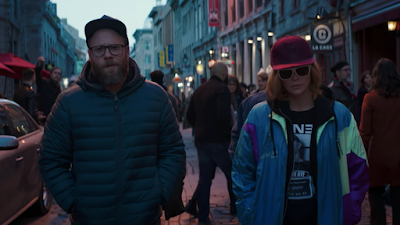 I know I'm an easy mark for Long Shot because I like these actors and because it's a lot like The American President, a movie I love to an almost unreasonable degree. My biases don't preclude me from seeing that it's a smartly written, very funny, and genuinely romantic movie that does what it sets out to do: present two likable people who are very different and try its very best to show them honestly develop feelings for one another. And before anyone complains about a woman like Theron falling for a guy like Rogen, allow me to say that Long Shot sells the relationship. Besides, it's not so impossible. Take it from someone who knows first hand.
Posted by Patrick Bromley at 5:00 AM