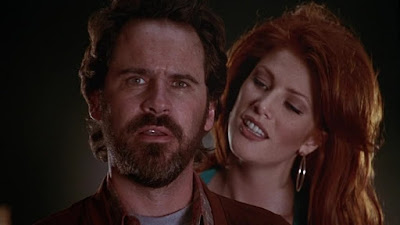 Random horror videos to enjoy and share with your boofriends and ghoulfriends.

I love the bizarre mash-ups people post on YouTube. This Logan-style take on Ernest Scared Stupid set to Johnny Cash’s cover of “Hurt” takes 0:58 to get going, but after that it’s wonderfully cut together and makes the workmanlike 1991 family horror-comedy sizzle like it never has before. Ernest hurts (emotionally) and now he’s going to make the troll hurt (physically). Beautiful.

I mentioned this home video retailer promo for Bordello of Blood on the Tales from the Crypt: Demon Knight/Bordello of Blood podcast a few years ago and here’s the video for your viewing pleasure! My thoughts are as follows:

• I like how they say it’s straight from a smashing theatrical release when it made practically no money in theaters.

Yes, I agree that Angie Everhart is a scorching hot supermodel (and apparently a real joy on the set according to Corey Feldman). No, I disagree that Erika Eleniak is delectable, only because if she’s delectable than too many other people are also delectable rendering the word “delectable” to have no meaning.

• I would have ordered so many three-unit pre-packs of Bordello of Blood, just to give all of you the Hot Air Popcorn Popper as gifts. Cha-ching indeed!

It’s appropriate that Hardees was the official headquarters for Ghostbusters II. I like how prideful the Hardees manager is that they scored this tie-in (“When you see a ghost...blayst!”). The ghost blasters look pretty dope (I wonder if they’re on eBay -- checking -- YES! Cups and Blasters!!!). Doesn’t the Cinnamon ‘N’ Raisin Biscuit (0:28 mark) sound nasto blayst-o?

This is a bonus because Boglins was a toy line and not from a movie, but I thought for a minute it was (I was thinking about The Boogens) and this is terrific. Aren’t these things weirdly adorable? My favorite part of this video is when the Boglin comes out of the tile to scare the cat because the cat doesn’t know it’s all a joke and probably was terrified for the rest of its life that Boglins exist and could come out tile at any time and it’s the cat’s house and they have to defend it. And how dope are those hologram cards? It’s also such a weird juxtaposition that part of the proceeds from the 1-900 calls are going to the Special Olympics. It’s touching and not what I was expecting based on the rest of this TV spot’s tone. Boglins have hearts of gold!

The jump scare at the beginning of this otherwise earnest PSA is quite effective. I hope Stephen King really does walk the stacks frightening browsers.

What would Freddy really say if you called him at a 1-900 number? Would there be a script? Is he just winging it? Would he talk about his day or a recent successful kill in a nightmare he created for some unsuspecting teen? Also, holy hell -- that merch run in the last 30 seconds is no joke. I want to be a part of this sweepstakes! I checked online and I can’t buy a Freddy’s Dead cast & crew jacket, but I did stumble on an auction for one from The Astronaut’s Wife for $40! I’d bid on it if it weren’t a men’s medium. I would need an XL because I’m that big of a fan of The Astronaut’s Wife (I’ve never seen it).

A few observations. 1) I’ve been seeing some Scream rankings floating around lately and too many (i.e. any) of them are putting Scream 2 in last place. It’s a good movie. I don’t get this at all. Second best in the series all the way. It’s not even close. 2) Everybody in 1997 looks like they came out of a PlayStation game. Clothes and accessorizing were in a tough spot. 3) The “It was great” woman at 0:28 sounds like she cries immediately after the camera’s off her. Like she’s going through a lot in her journey and Scream 2 was just what she needed that night. I’m happy for her. I’ve had that night too with Deuces Scream. 4) I dig the soundtrack flex at the end of this TV spot because the Scream 2 OST has some bangers and deep cuts.

I watched Jason Takes Manhattan for the first time recently and really didn’t like it but was blown away by the end credits song: “The Darkest Side of the Night” by Metropolis. It’s one of the best songs of the 1980s without question. I’ve listened to it on YouTube at least 20 times since April. It kind of has a “It’s 5am on the last Saturday of the 1980s” walk of shame vibe to it, where all the coke is up your nose and it’s time to make some changes because you’re a father now and the ‘90s need to be different. That’s what the “The Darkest Side of the Night” means to me, not Jason. The 2:28 mark is when you close your eyes while listening to the song on a graffitied subway train. If I ever directed a movie, this song would be my “Gimme Shelter.”

Happy Scary Movie Month everybody! If you have any fun horror-related clips to add to the Grab Bag, leave them in the comments below.
Posted by Patrick Bromley at 5:00 AM