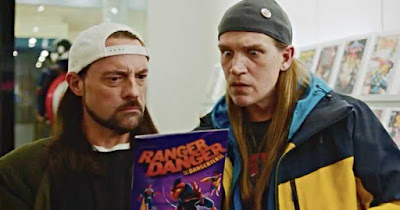 The review duo who watches all the genres.

Adam: This week, we’re catching up on our favorite non-horror new-to-us discoveries from the past two months. My first pick is the surprisingly likable Jay and Silent Bob Reboot. Kevin Smith’s latest feels like Clerks II, where the first half of the movie is crass and a bit been-there-done-that, but then it pivots late and becomes disarmingly sweet and clever (the third-act Chronicon sequence is basically Kevin Smith doing Gremlins 2 to his own filmography). We’ve said before that Kevin Smith is entrenched in “for the fans” mode at this point in his career, and Jay and Silent Bob Reboot feels like he’s giving a hug to the people still seeing Kevin Smith movies in 2019. The movie’s funny too and some of his meta commentary about reboots is inspired and level-headed. I don’t know if I agree with all of Smith’s thesis about do-overs, but it’s an interesting perspective nevertheless. I really want you to see this movie because it has a funny/sweet Ben Affleck-Chasing Amy epilogue that almost made me cry. I can see myself wanting to revisit Jay and Silent Bob Reboot in the future. I like it a lot more than Jay and Silent Bob Strike Back.

Rob: I missed those Fathom Events screenings for that one, but the Affleck/Amy aspect and your Gremlins 2 comparison has me really interested. Can’t wait to see it! My first pick is Knock Down the House, Netflix’s 2019 documentary about the wave of first-time female candidates who ran for U.S. Congressional office in 2018. Director Rachel Lears captures not only the charisma and tenacity of the candidates, but their undeniable bravery in challenging the political machines and corporate influences that have created a wall between our government and its people. One of the most sinister things our government has done in the last half century is to encourage political apathy, and as a public servant and someone who cares very deeply about our collective political and sociological literacy, I’m encouraged to see a documentary not about ideology or party affiliation, but about reminding people that they actually have the power to make profound change without millions of dollars or name recognition. It’s disappointing that AOC was the only one of the four candidates to win her seat, but if even one young person sees this documentary, I’m positive that won’t be the case next time.

Adam: Sounds interesting. My next pick is Ad Astra, which also caught me off-guard because I’m burnt out on Fall-IMAX-Space Movie That’s Really About Your Dad. What’s admirable about Ad Astra is that right away they’re like “Yep, it’s about the dad” so it leaves them with the rest of the movie to wander and land somewhere else thematically. I was won over when the film started getting weird with pirates on the moon and it only continues from there. Ad Astra has a slow, meditative pace that lulls you into having your mind wander and then suddenly there’s a floating baboon and it’s pissed! The movie makes no sense at all logic-wise, but it doesn’t really matter because Ad Astra feels like a singular, oddball, cinematic experience. This is my new favorite James Gray movie, with Two Lovers a close second. I’m surprised how much I enjoyed it.

Rob: I didn’t get to Ad Astra yet, but I’m glad my inexplicable excitement for that one isn’t entirely without merit. My next pick is the gothic mystery We Have Always Lived in the Castle, which, look, I have to admit that I watched because it stars Alexandra Daddario. I’m not proud of that, but, there it is. Daddario and Taissa Farmiga give strong lead performances — we even get a little dose of the reliably-weird Crispin Glover as Uncle Julian! — and it’s beautifully staged by director Stacie Passon, but it never really settles into a tonal or narrative groove that entirely worked for me. It’s cold without being tense, if that makes sense. I’ve never read Shirley Jackson’s source novel, but this adaptation would be an Also-Ran among the Alfred Hitchcock/Agatha Christie/Park Chan-wook thrillers in this vein. That said, has Sebastian Stan always been such a snack? Maybe it’s because I’ve only really seen him as the brooding and greasy Winter Soldier, but he’s a sterling hunk of khakied man meat in this one. He’s got a real Tom Ripley thing going. It almost — almost — draws the eye away from Daddario. Anyway. I lost my train of thought. The movie’s fine. 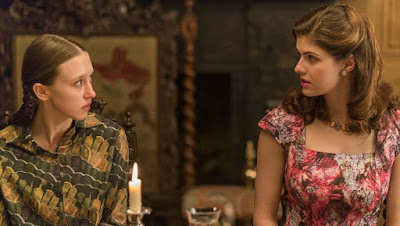 Adam: Word. I hadn’t heard of that one before. My third pick is Dolemite Is My Name, the new Rudy Ray Moore biopic on Netflix directed by Craig Brewer. I’ve been a fan of Brewer’s past work (specifically Hustle & Flow and Black Snake Moan), so it was nice to see another solid film from him. He benefits working from a script by screenwriters Scott Alexander and Larry Karaszewski, who are the best in the business writing comedy/drama biopics. Dolemite Is My Name is just a nice movie through and through. The lead performance by Eddie Murphy as Rudy Ray Moore is charismatic and energetic, which is great to see. You can tell immediately what a fan Murphy is of Moore and how much he cares about providing him with a tribute that will branch out his work to more fans. The supporting cast is also fun, especially a broad performance by Wesley Snipes as D’Urville Martin, director of the film Dolemite. Much of the pleasure of Dolemite Is My Name is seeing Murphy and Snipes turn in strong work again in a new comedy. I’m no expert on Rudy Ray Moore (I’ve only seen Disco Godfather so far), so I also appreciated the Brewer film too because I learned more about him. Judging by Disco Godfather, I thought Rudy Ray Moore was kind of nuts, but Dolemite Is My Name shows how much of that was just affectation, persona and performance, which makes his work even more impressive. 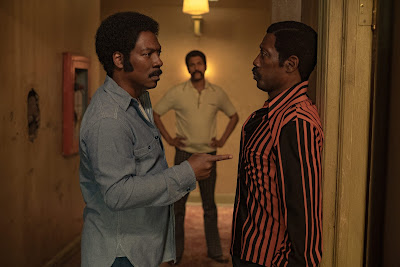 Rob: I also watched and really enjoyed Dolemite Is My Name (I hope it’s okay if that’s also my third pick!). It’s one of those great “Let’s put on a show!” movies that sits at a wonderful intersection between Ed Wood and The Disaster Artist (Zack and Miri Make a Porno also comes to mind) in that it has sympathy for its subject without glossing over their faults, and it acknowledges both the rules of the game and the virtue of breaking them. I’m a little more familiar with Rudy Ray Moore (I’ve seen Dolemite, Petey Wheatstraw, and Disco Godfather), and I think Eddie Murphy makes a ton of really smart decisions in his portrayal. Moore is a world-class huckster, to be sure, but that never detracts from his genuine love of performance and creation. Knowledge of Eddie Murphy’s recent history adds a bit of a meta quality, too. As you said, it’s great to see him and Snipes go all-in on something this good after such a dry spell, and I was excited by the possibility that it might even expose them to new audiences. I’d also love to see a spin-off starring Da’Vine Joy Randolph’s Lady Reed; she takes a role that could read as the movie’s Designated Sentimentality and elevates it to something a bit more resonant.

Adam: We’ll be back next week with our next All Pacino installment as we look at the documentary Looking for Richard. Until next time…