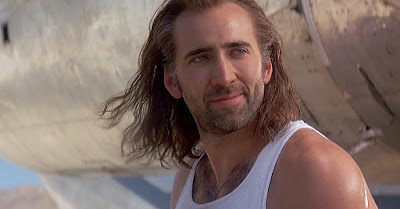 A marathon of movies from my favorite actor.

I decided about two weeks ago to watch every Nicolas Cage DTV movie pretty much on a whim, but that project has sent me on a deep dive of the actor's entire filmography. I've tried to fill the few holes I have in his more than 100 IMDb credits and Erika and I have rewatched a bunch of his films, finding new appreciation in almost every single one of them (despite really liking them the first time around, many of them now play even better). It's brought me to a realization I had gotten away from for several years: Nicolas Cage is my favorite actor. That was true for pretty much all of the '90s and the early part of the 2000s, but his transition towards DTV work and what I perceived to be a lack of quality control even in some of his studio efforts led me astray. This was just a phase, I'm happy to report, and I'm completely back in love with everything he does -- even the DTV work and some of his "lesser" studio efforts. I'm pretty obsessed at the moment.

I could have very easily made this 48 hours or more, so keep that in mind before you comment with "You forgot ________!" I had to leave a lot of favorites off. 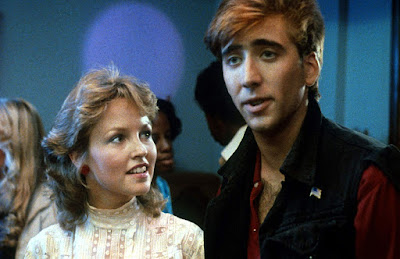 Let's begin at the beginning. Yes, Cage's first on screen performance was as one of Judge Reinhold's friends in Fast Times at Ridgemont High, but Valley Girl represents both his first leading man turn and his first appearance credited as Nicolas Cage (previously Nicolas Coppola). It's Romeo and Juliet updated for the early '80s set and it's wonderful, full of great music and appealing performances, none more so than Deborah Foreman and Cage as the young lovers at the film's center. 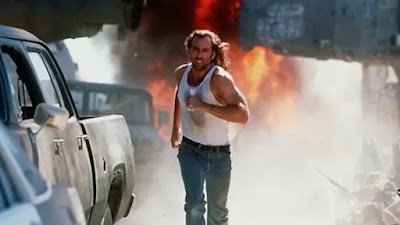 The middle entry in Cage's late-'90s action trilogy is actually my least favorite of the three but one of the most rewatchable. It seems to fit well into this early slot. It's been meme'd and "put the bunny back in the box'd" to death, which robs it of some of its legitimate entertainment value and turns it into a relic of ironic appreciation. The cast alone is incredible and everyone seems to be having a great time, even if slow, Southern Nic Cage is one of my less favorite kinds of Cage (this does not apply to H.I. McDunnough). It's kind of a Goodfellas/Casino thing with this movie in that I think The Rock is the better movie, but I'm more likely to feel like watching Con Air if given the choice. 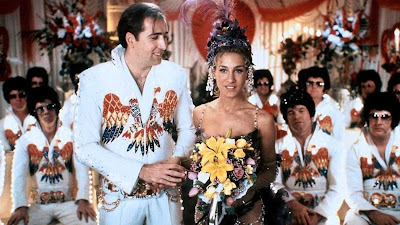 I posted something to this effect on Twitter over the weekend, but I don't think we give Nicolas Cage enough credit as a romantic lead. Look how great he is in It Could Happen to You and Moonstruck and this movie, none of which are very much alike except that they're all sweet and wonderful and Cage is terrific in all of them. This is the zaniest of those three, which is why I'm programming it here -- plus all the airplane/Vegas stuff will make it a great double bill with Con Air. Erika and I rewatched it last week and it's even funnier than I remember it being. 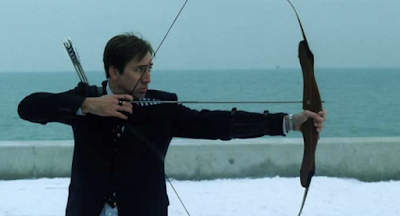 This was one of the more difficult slots to program, if only because I had several 2000s Cage dramas I wanted to go with, including The Family Man and Matchstick Men. I chose to go with the third of his "Man" trilogy, the underrated The Weather Man, if only because I would love to bring more eyes to it. Cage plays a Chicago weatherman (duh) in a state of crisis, and the film is both darkly funny and totally empathetic to his plight in equal measure. It's the kind of part that only an actor like Cage could pull off, and it makes me wish Gore Verbinski got the chance to make more small films like this one. 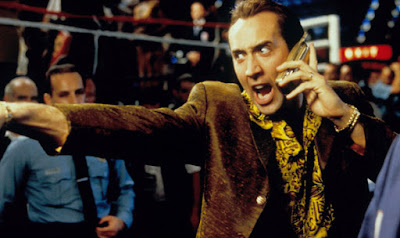 At the time of Snake Eyes' release, Nicolas Cage was my favorite actor and Brian De Palma was my favorite director. The prospect of the two of them collaborating on a real-deal De Palma thriller was almost more excitement than I could bear. The movie is flawed (the third act was famously hacked off after test audiences disapproved), but there's too much good stuff in it for me not to love it, not the least of which is that amazing opening "single take" sequence. Cage and De Palma are both showy as ever here, and the movie is better for it. 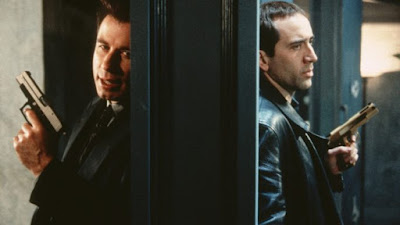 This is peak Hollywood Cage, the perfect culmination of all his leading man studio work and weirdo character parts. John Woo's operatic style perfectly suits Cage's theatrical choices, but he's not all over the top -- he's doing a lot of quiet, subtle stuff that goes beyond just a Travolta imitation. This is my favorite of the Cage Action Trilogy, so it deserves the primetime slot in our marathon. 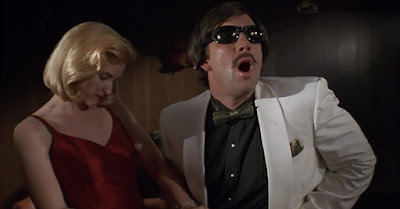 We're not into the weirdness of the overnight section yet, but we're getting closer. Let's let Cage get weirder, too. Most of this movie, directed by his brother and co-written by future Oscar winner Nick Vallelonga, is standard made-for-cable thriller stuff. Into this enters Cage, who decided to play his heavy as Andy Kaufman's alter ego Tony Clifton. The results are insane and spectacular, maybe the craziest Cage has ever been allowed to go on screen. I don't think the movie is good, but thanks to Cage, it's something special. 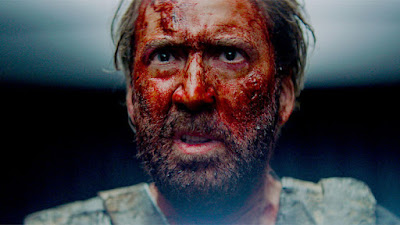 There has never been a better midnight movie. 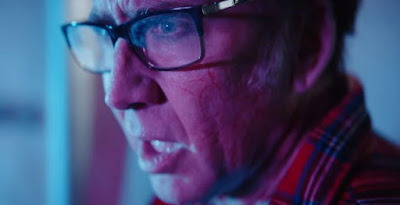 My favorite movie of 2020 so far is perfect for the 2 am slot -- a neon pink, hallucinatory, Lovecraftian nightmare that gets trippier and more abstract the longer it goes on. There are a couple of Nicolas Cage horror movies that could be programmed overnight (Mom and Dad, the unfortunate Pay the Ghost), but none would play better than this one. Please check it out if you haven't already. 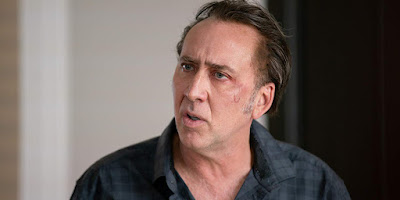 I wanted to be sure to program one of Cage's DTV movies somewhere in this lineup, and this is one of my favorites. He plays a guy who gets out of prison after almost 20 years away looking to get even with the people responsible for putting him there. Oh, and he's dying of insomnia. Cage gets a number of standout moments, but lots of quiet ones, too, and the film is good pulp with a genuine emotional spine. It's a movie I hope more people will check out. 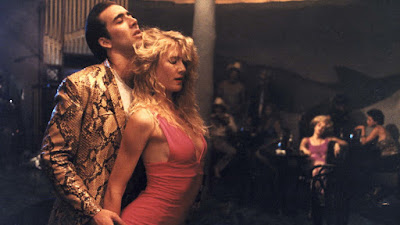 As the sun comes up, let us wander bleary-eyed into the world of this David Lynch romance. Cage is Sailor and Laura Dern is Lula, two young lovers on the road running from their pasts and towards an uncertain future. They have lots of sex, dance to heavy metal music, and wax poetic to one another in this riff on The Wizard of Oz. This is one of my favorite Nicolas Cage roles of all time. I don't know if two people have ever been more attractive. I like to end on something upbeat, and Peggy Sue Got Married is about as upbeat as it gets (though not without its share of melancholy). This movie and Vampire's Kiss are responsible for my love of the actor. I was still pretty young when I learned that Cage modeled his performance and voice after Pokey (of Gumby and Pokey fame), and that was the moment when Cage became my favorite actor. I just have to love a choice as gutsy and insane as that one. E and I rewatched this one last year during 1986 week (leading up to F This Movie Fest) and I was surprised at just how good Cage is. The voice is more than just a stunt. It makes him insufferable and laughable early on, but eventually we grow to really love him just as Peggy Sue does. It's an incredible piece of acting from an incredible actor.
Posted by Patrick Bromley at 5:00 AM

Email ThisBlogThis!Share to TwitterShare to FacebookShare to Pinterest
Labels: 24 hours of movies, color out of space, con air, face off, mandy, nicolas cage, wild at heart