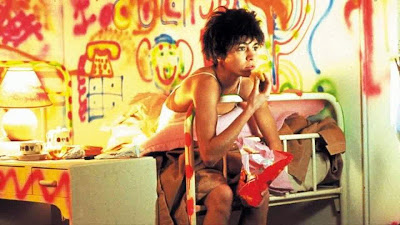 An agent (and an idea) that’s hard to kill.

Back in the 1960s, so many westerns were being produced and directed by Europeans that they spawned a new subgenre, called Eurowesterns, paella Westerns, and the most famous, spaghetti Westerns, made popular by the success of Sergio Leone.

Once in a podcast long ago, Patrick and I suggested that Luc Besson’s action movies were the modern version of the spaghetti western, an import lovingly infused with European flavor to a traditionally American genre. La Femme Nikita (originally titled Nikita) was one of the first in the wave of action movies heavy on style, which has manifested itself in bigger titles like the John Wick series and Atomic Blonde, to smaller ones like The Villainess. We take a moment here to celebrate one of the modern progenitors of the category.

My Fair Lady except a French girl junkie turning into a spy/assassin. What could go wrong?

Luc Besson - categorized early on in his career as a director who favored style and spectacle over narrative, Nikita should be given more credit than just being a stylistic exercise. In response to critics of Nikita, Besson said “critics should be looking towards the future, but in France, all they want to talk about is the past.” The quote itself feels reflective of the general climate of Europe in the late '80s and early '90s: a mistrust of established authority, a clash of high and low culture, a tendency to destabilize and deconstruct. We see all of these on display in the title card of the movie: four rough looking youths (including our protagonist), dragging a captive on the pavement, set against the classical backdrop of Paris. We see it again in Nikita’s first mission at the restaurant, decorated in a traditional style, but with Nikita in a modern cocktail dress, short haircut, holding a gigantic handgun while patrons scatter. While Besson could have made his movie at any point, these scenes capture the moment of a specific time and place so effortlessly. Although perhaps fairly critiqued for his overt concern for style, the movie’s vision of disillusioned youth being recycled as servants to do the bidding of an oppressive government is as resonant as anything we’d find in an action movie.

Anne Parillaud - it’s difficult to make this work unless we’re rooting for the central character in the midst of the chaos. Although openly indifferent to a sequel or return to the character, Parillaud plays Nikita as a troubled, scared kid whose gruff exterior is eggshell-thin. Although the movie encapsulates years of Nikita’s life, she never comes off as a professional, robotic killing machine; she isn’t like the Black Widow or Saoirse Ronan in Hanna, who are trained from birth for a lifelong mission. We see Nikita on the verge of panic even as she coolly completes her missions, never really losing sight of the inherent insanity of being an undercover killer while trying to be normal. Not only Parillaud’s look but her inherent pathos makes Nikita so iconic. 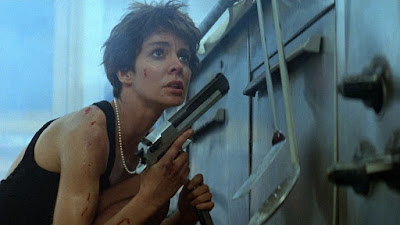 It’s a relationship movie? - On this rewatch, I was surprised by how much of the story is taken up by the relationship that Nikita attempts to establish with her love interest, Marco, a happy fella she meets at the supermarket. Most of the movie is conversations, actually, with Marco or with Nikita’s handler, Bob, which makes it feel perhaps slower than expected from what is known as an action movie. I guess it makes sense, because there’s only a total of four action set pieces.

Too much relationship outside of the movie - Besson and Parillaud were married at the time of filming, though divorcing a year after Nikita’s release. Besson apparently has a penchant for falling for his lead actresses, including Milla Jovovich when they worked together on The Fifth Element. 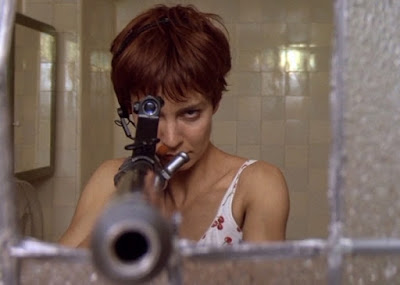 “Girls with guns” - Apparently the very first movie of this type was Yes, Madam (1985) starring Michelle Yeoh as a tough cop in Hong Kong, although it’s only broadly related to Nikita because of a female protagonist with a gun. A Japanese film series called Zero Woman (starting in 1974) is the closest forebear, since it also involves a woman freed from prison to become a secret assassin for a government agency.

Despite these forerunners, Nikita still feels unique in its place as a primary text for so many of the female assassin movies which came afterward. Aside from the direct adaptations of Point of No Return and the two television series (starring Peta Wilson and Maggie Q, respectively), the movies that borrow heavily from the stylized assassin formula include Haywire, Underworld, Salt, Atomic Blonde (so, John Wick as well), Red Sparrow, Hanna, and The Villainess, and that’s not even including all of the Milla Jovo-verse of Ultraviolet and the Resident Evil movies. Besson himself can’t help dipping back into his own bag of tricks with Colombiana and Anna, though lately it feels like he’s overcooked his formula for his assassin stories.

What I find most appealing about this genre is that it’s surprisingly durable. I think initially it grew out of an exploitative interest and titillation for cheap action movies, but it’s developed over time into a specific aesthetic that a visual stylist like Besson could turn into his own, and still again into stories where the central female protagonist, rather than being forced into a subservient (although seemingly potent) role, is empowered for her own revenge or agency. There is no desire for Nikita to be chained down by the authoritarian rule of her government organization; she would never want to be a hired gun forever, like Bond or Bourne, not if she knows what normal life could be. It’s what makes Nikita work best as a film, because she never completely loses her humanity and her empathy. The action scenes are cool and beautiful to look at, but it works because there is a live, beating heart behind all of it. At the end of the movie land, when Nikita’s fiance Marco tells her handler, Bob, that she’s already disappeared, and that he’ll miss her, we actually feel it. Despite all of the heightened shenanigans of an underworld of assassins, the movie doesn’t lose its grip on reality.