2K Replay: DOWN TO YOU 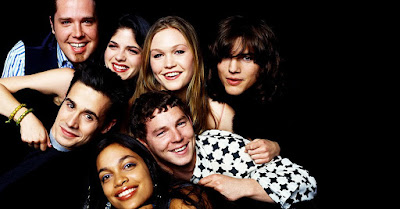 Welcome to 2K Replay, the home of the year 2000 in Film. This week I’m revisiting a movie suggested by our own Patrick Bromley: Down to You.

• Best Scene/Moment: The scene where Julia Stiles dances to Al Green’s “Let’s Stay Together” for Freddie Prinze Jr. in the dorm common area in front of twenty other people. They cheer her on like Jerry O’Connell in Scream 2. It’s cinema.

• Best Food: Freddie Prinze Jr. and Julia Stiles have a thing where they buy chocolate marshmallow cake and the box says “Mmmm…Cakes” and after a while I was thinking “I want an Mmmm...Cake.” 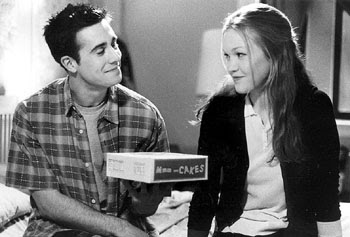 • Best Quote: “That kiss belongs in a box so I can show my grandkids one day.”

• Best Merch Available on eBay Right Now: “DOWN TO YOU (2000 DEALER SCREENER) NEW VHS FREDDIE PRINZE JR, JULIA STILES” for $9.89. This is a promotional copy of the movie that was sent to video stores in advance of the home video release. I want this just for the quotables on the back of the tape such as: “Hot-Renting Fun Like She’s All That And 10 Things I Hate About You,” “Hip Star Power,” “59-Day PPV Window,” and “Trailered on...Scream 3 And Bicentennial Man!”

• Director Check: Down to You was written & directed by Kris Isacsson. This is his only theatrical feature film and I appreciate that it feels like a film he poured his heart into like that dude who wrote & directed Bed of Roses and only Bed of Roses. Isascsson went on to direct a few TV movies and a TV series. One of the TV movies is called Tempting Adam, which sounds like something I should probably watch.

• Year 2000 Movies to Trailer Before It: Here on Earth, Loser, Whatever It Takes

• Draft Day or Down to You? Draft Day

Can’t wait for Scary Movie Month? I got you covered.

• How Did It Rent at Blockbuster? It did okay with the TRL crowd. We probably had about 18 copies.

• Mall Movie? This feels like one of those mall-stretch films where it just barely gets a spot at the classy theater until they realize they made a mistake and punish future movies for Down to You’s trojan horse maneuver.

• Only in 2000: A dream sequence where Freddie Prinze Jr. is being humiliated by Adam Carolla and Jimmy Kimmel on The Man Show.

• Life Imitating Art: In college I had a frat brother people called “Edge.” He went up to me once at a party to introduce me to his new girlfriend. He said, “Hey man, doesn’t she look just like Julia Stiiiiillllles?” She didn’t.

• Poster Score: 2.5 out of 5. It looks like an ad for a new show on The WB that airs after Amanda Bynes’ hip, sexy and essential What I Like About You. That show helped get me through post-collegiate ennui and I’ll love it forever. 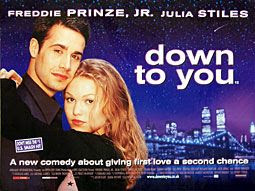 • Scene Stealer: Shawn Hatosy. I find him more engaging in my old age than I did back in 2000. I need to see Outside Providence.

• I Miss: Freddie Prinze Jr. romance movies. The dude is as affable as it gets. I’m a fan.

• I Don’t Miss: Circa 2000 Zak Orth. He plays a similar smarmy character in both Down to You and Loser. I think the characters are supposed to be funny-irritating, but Orth is too good at his job and just makes them awful-irritating. In Down to You, he’s a college student but also an adult film star but also maybe Orson Welles? It’s the worst. I say circa 2000 only because Orth is in 2001’s Wet Hot American Summer and he’s really funny in that.

• 2020 Crush: Dormitory Rosario Dawson is irresistible and vampy Selma Blair’s no slouch either.

• What I Thought in 2000: I remember thinking this was the best Freddie Prinze Jr. movie (it’s not) and/or it was sneakily good (an argument can be made). I used one of my five weekly free employee rentals to see it before street-date and later recommended it to people. It was a real trust fall since the film has a 3% approval rating on Rotten Tomatoes.

• What I Think in 2020: I still like this movie way more than I should. It must be the best 3% approved movie on Rotten Tomatoes. Some of the dialogue is rough, but the cast sells it. It also made me nostalgic for the year 2000, when a cast of Prinze Jr., Stiles, Hatosy, Blair, and Dawson would be in a romantic comedy playing in theaters. Those were the days. You don’t know what you’ve got til it’s gone. C’est la vie, that’s just the way it goes.