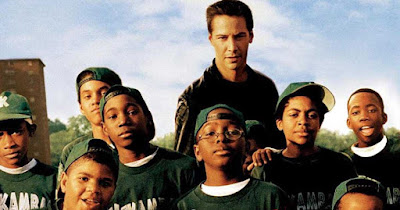 The review duo headed straight for the ‘ship.

Rob: Well, it seems there won’t be any Major League Baseball for a while, so let’s fill the massive gap in our souls with another entry in our baseball series! Next up is 2001’s Hardball, a Bad News Bears riff starring Keanu Reeves as Conor O’Neill, a gambler who takes on the role of a Little League coach so he can get out from under some serious debt to local bookies (The details are complicated and couldn’t matter less). O’Neill’s team is made up of hardscrabble kids from the Chicago projects (including a young Michael B. Jordan!). Diane Lane is their teacher. John Hawkes is O’Neill’s gambling partner. O’Neill’s motives are strictly financial, at first, but he adjusts to the mentor role the longer he holds it. Look, you get it. You’ve seen this movie a thousand times.

Adam, I’m going to let you start because this is a Chicago movie and those are the rules. 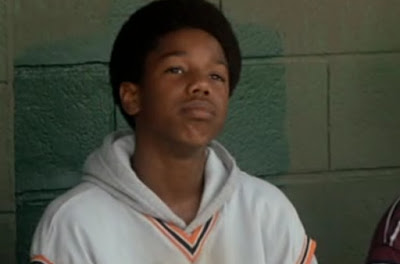 Adam: I’m at a slight disadvantage because Hardball mostly takes place in a section of Chicago I know nothing about firsthand. The details I do know, as someone who lives near Chicago, Hardball gets pretty wrong. A few examples:

● I think John Hawkes says he’s scalping Chicago Blackhawks tickets, but it’s clearly a Chicago Wolves game. If he’s scalping tickets to a Chicago Wolves game then he’s an idiot among idiots. The Wolves are a local independent league hockey team whose tickets cost about $10 and are always available. He’s also selling them outside the Great Lakes Arena, which doesn’t exist in Chicago or the neighboring suburbs. I’m pretty sure this movie was shot in Michigan.

● There are several scenes where Keanu Reeves is betting on the post-Michael Jordan era (era) Chicago Bulls but any time they’re shown on television it’s a CBA game because the filmmakers didn’t get rights to show footage from NBA games. I’d get it if this were Slamma Jamma, but not a movie from a major studio.

● Keanu takes the Little League team to a Cubs-White Sox game at...the old Tigers Stadium??? All of the players are wearing warm-ups that look like the trash bag Bradley Cooper wore when he was jogging in Silver Linings Playbook.

● The kids lose their mind when they think they see punk cheater Sammy Sosa. If these kids were from the Southside of Chicago, they would more likely be Sox fans than Cubs fans. I dunno. Maybe they were watching the Cubs on WGN.

● Keanu takes Diane Lane on a date to Sluggers, which is over by Wrigley Field. This would make sense if they were 24 years old. Grown ups don’t go to Sluggers on dates. They would be Downtown or in Old Town more likely. P.S. Sluggers (if memory serves) is a bar that has indoor batting cages. It’s kind of an oversight to have a date-night scene in a baseball movie at a bar with an indoor batting cage and then not set the scene at the batting cages. 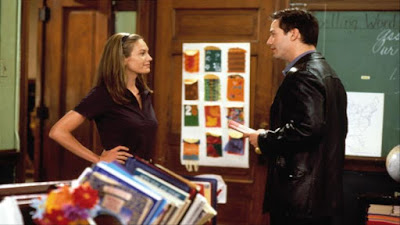 I’ll get more into the movie in a bit, but let me start by saying Hardball can be real lazy when it wants to be. What did you think of it overall?

Rob: In theory, it’s fine. It’s all been done before, but there are a few standout kid performances (including DeWayne Warren as G-Baby) that make parts of the movie fairly watchable. The trouble is the massive and incongruous tonal shifts that make it feel as though director Brian Robbins (Norbit, Varsity Blues) wasn’t sure what kind of movie Hardball was going to end up being and just shot for the middle. It’s not an unforgivable sin, but it’s incredibly distracting and prevents sweeping moments of drama — including some dark and tragic stuff — from really landing. Imagine The Bad News Bears meeting Uncut Gems but not being funny or tense. It’s just kind of bland.

And then there’s Keanu Reeves, who is just plain miscast. I love Keanu in the right role as much as anyone, but this ain’t it. He keeps falling in and out of this dirty street urchin persona (What accent is he doing?) that doesn’t work. The root of the problem might be that I just don’t believe Keanu Reeves knows anything about gambling. Or the streets. Or bars. He isn’t an everyman. He’s the best of us. He lives on another plane of existence. His participation in this whole affair made me actively uncomfortable.

Adam: I don’t want to criticize Keanu Reeves harshly either, but I agree his performance doesn’t work and that’s a big problem with the movie. He’s going for Uncut Gems but it’s not (at least in 2001) in his range so it feels jittery and uncomfortable in a way that is more distracting than effective. I agree with you, too, that DeWayne Warren as G-Baby is the standout among the child actors. That kid looks like he’s lived 50 years despite being maybe 8 years old. He’s got some gravitas going for him. I found his story (especially in the third act) to be handled effectively. It’s when the movie (and Keanu who’s reformed at this point and calmer) is at its best. I wish the filmmakers did more with his romance with Diane Lane (who plays the kids’ school teacher) because she’s a bit wasted in the role as written. It’s like, guys you got Diane Lane and you’re acting like she’s Monica Potter (sorry for the shade, Monica Potter).

I don’t think the movie has any particular knowledge of baseball. Roger Ebert said it really well in his review that there’s no sense of strategy and Reeves’ character “just lines them up and hectors them, and they look like kids patiently watching some crazy white guy work out his issues.” What I do think the movie should get credit for is being a movie about African-American kids playing baseball. People who follow baseball know that representation among African-Americans in the sport (on the big league level at least) has vastly declined since the time of Hardball’s release in 2001 and now. It was nice to see in a movie.

Did you think the scenes off the field worked better? 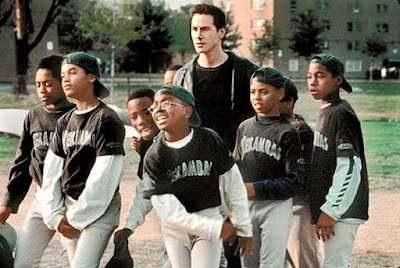 Rob: Yes, mostly because I’m struggling to think of an on-field scene of any consequence. As you said, O’Neill doesn’t really coach the kids. They’re good players from the start who evolve into a team just by virtue of playing together for a little while. All O’Neill really does is try to turn the kids against the league president for enforcing perfectly reasonable rules (One kid is too young to be on the team, and another listens to music through headphones while pitching). I mean, I understand that the rich team’s coach was trying to disqualify their best players on technicalities because he was afraid to face them, but none of that influences the outcome of the season in a meaningful way.

Rob: If anything, the kids benefit from O’Neill’s influence solely because it gives them someone to rally against. I’m pretty sure there are at least three scenes in which O’Neill quits, the kids give him shit about it, and he returns. Do they even need him?

It’s worth mentioning that the movie is based on Daniel Coyle’s book Hardball: A Season in the Projects, which (according to its description) actually focuses more on the creation and management of the league than it does on O’Neill’s character, specifically. I almost feel like I might have preferred that approach in the movie. It might have been a little more creative? As it stands, Hardball seems hesitant to engage too much with the inner-city lifestyle it depicts, which makes moments of tension like the assault of Jefferson Albert Tibbs (Julian Griffith) feel like a waste and a lot of the African-American characters feel like little more than mascots. I will say that it was fun to see Michael B. Jordan huddled up with a gang of men outside a housing project just a few months before we’d see him playing a similar character on The Wire. I know that’s Baltimore and this is Chicago, but my personal headcanon is now that Wallace is a former Little Leaguer gone bad.

Anything else on Hardball? This is a Mark Off for me.

Adam: Yeah, this is one I can’t recommend despite its good intentions. Next week, we’ll be back with a new series at Reserved Seating where we’ll cover all the Pixar films. First up is Toy Story. By the end, we’ll be able to rank the Pixars! Until next time…