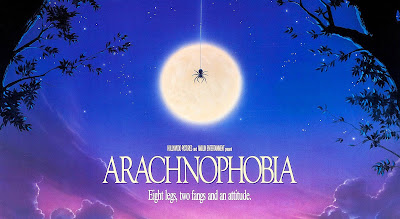 I must have been four or five, all dressed up and getting ready to go to church. My mom was standing behind me brushing my hair as we both stood in front of our large bathroom mirror. Suddenly, her face went ashen and her expression turned to stone-faced seriousness.

As I write these words, I still feel the terror I felt as a little kid in that moment. Would it bite me? How long had it been there? Had it laid eggs?

I honestly had no idea what she was talking about. April what? So, my introduction to my most hated of “holidays” and my deathly fear of spiders came to fruition on the same day. I’ve never entirely gotten over that moment. I remember learning about deadly black widows in first grade and then finding one on my dad’s tool bench. I remember asking my pastor around that time why God created spiders—his answer did not reassure me. To this day, my wife is the one who takes care of the spiders in our house. If I see one, I’m positive that at least six more are crawling on me.

So, as you can imagine, when I was twelve and advertisements for a crazy spider movie with the guy from Roseanne started showing up on TV, my thought was, “no thanks.” Even though the TV spots were enticing, it was being pitched as a “thrill-omedy” rather than a horror film, and I loved the actor I knew at the time as Dan Conner, there was no way I was going to subject myself to being trapped in a dark room with that movie, a couple hundred strangers with who knew what kind of proclivity for pranks, and the unseen arachnid menace that surely would have been far more present at such a screening. 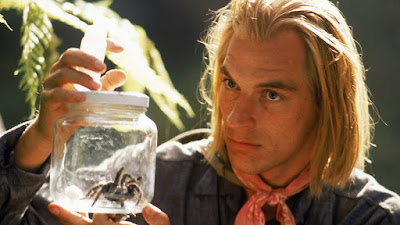 Needless to say, I did not see Arachnophobia in theaters back in 1990. But after seeing a few pictures in Fangoria, which my parents had begrudgingly started letting me buy--with my own allowance of course--I thought it would be okay for us to rent it for our weekly family movie night one Saturday. We did. We all watched it together. My family was surprisingly merciful to me. I didn’t see it again for nearly thirty years.

Early this year, I found myself drawn to seeing Arachnophobia again and I can’t really explain why. It was almost like a dare to myself as Poltergeist II: The Other Side, which is one of my kindertrauma movies, had been a few months before (don’t get me started on that tequila worm monster). So, “how did it go?” I hear you cry. Well, as it turns out, the Thrill-omedy is still pretty damn effective after all these years. It even made this grown man “yeeee!” Yes, that is an accurate description of the sound I made when that spider dropped down from the lamp shade. 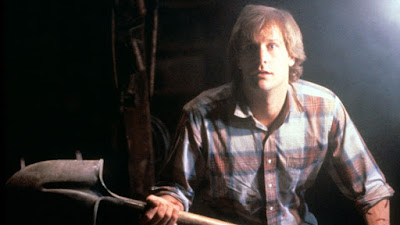 In case you haven’t seen it in a while, Arachnophobia centers around arachnophobic San Francisco doctor Ross Jennings (Jeff Daniels) and family who have just moved to the tiny rural town of Canaima, California. He has made arrangements to take over the small local doctor’s office, but things don’t go to plan as the town’s current doctor decides not to retire, forcing Jennings to build his practice from the ground up. Little do Ross and wife Molly (Harley Jane Kozak) know, a massive Venezuelan tarantula has made its way to their barn and mated with a common house spider, producing a deadly swarm of arachnids that have begun wreaking havoc on the little town. It comes down to Jennings, with a little help along the way from entomologist James Atherton (Julian Sands) and eccentric exterminator Delbert McClintock (John Goodman), to save the day.

The story is simple enough, but the execution, including the script by Don Jakoby and Wesley Strick, the direction by Frank Marshall, and strong performances across the board, makes for something really special. Two elements in particular steal the show: the great John Goodman as Delbert McClintock and all those eight-legged freaks themselves.

The character of Delbert supplies most of the “omedy” in this thrill-omedy as well as one of the most memorable characters not only in the film, but in all of John Goodman’s illustrious career. That is genuinely saying something considering this is the man who played Gale Snoats (Raising Arizona, 1987), Charlie Meadows (Barton Fink, 1991), and Walter Sobchak (The Big Lewbowski, 1998) for the Coen brothers, as well as voicing “Sully” in Monsters, Inc. (2001) and Monsters University (2013) and playing one of television’s great characters, Dan Conner, for hundreds of episodes on Roseanne and The Conners. Here, Goodman is more than just a comic foil to the mainly grounded and serious characters of the film, but an example of taking a small role, pouring every ounce of energy and imagination into it, and running away with the show. With methods more akin to the Ghostbusters than any typical exterminator and advice like, “tear out bad wood; put in good wood,” Goodman leaves an indelible mark on the role that made him the film’s greatest icon. 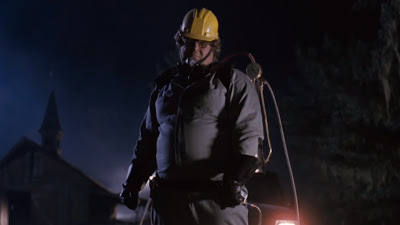 And then, of course, a great deal of the thrills come from that army of poisonous hybrid spiders. The stars of this show, for the most part, are not a special effect. Though a few of the bigger ones are played by puppets, most that appear in this pre-CGI feature are the real deal; large, though not poisonous, Avondale (sometimes called Delena) spiders from New Zealand. Knowing they are harmless to humans does not make the film less effective, however. They are plenty fierce looking for me and play their role convincingly. Every time I watch this movie, it is with a clenched jaw and an elevated heart rate.

There’s no doubt that Arachnophobia is a great popcorn flick, but it is also a masterclass in building suspense and tension, relieving it with just the right amount of humor, and then paying it off with a great scare. Usually, I despise jump scares, but here they work for me. They are not cheap or unearned, but masterfully crafted for fullest effect. Having been a producer for some of the masters of this balance of suspense, humor, action, and drama of the 80’s like Joe Dante, Robert Zemeckis, and especially Steven Spielberg surely prepared Marshall for this task, and he certainly learned his lessons well. 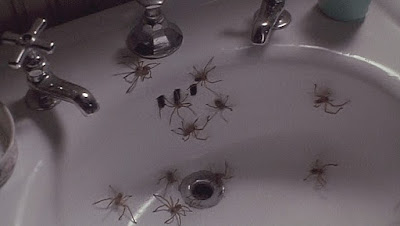 Most of my film writing has been about the horror genre. I find it funny that this PG-13 rated, so-called family thriller scares me more and makes me more tense while watching it than just about any other movie I can think of. Maybe it’s the level of plausibility, all the perfectly executed jump scares, or all those real creepy crawlies. Whatever it is, this film certainly doesn’t cure my own arachnophobia, but it does give me a chance to face a fear, have a lot of fun along the way, and come out alive on the other side.