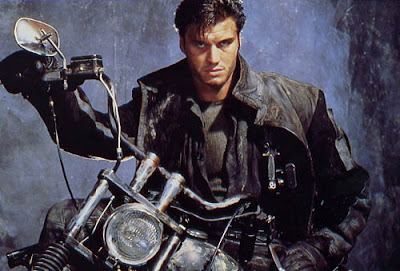 If you're a regular reader of F This Movie!, you know of my undying love for #HeavyAction. I love the big budget classics, but I love the smaller DTV movies, too. To celebrate '80s action day for #Junesploitation, I thought it might be fun to highlight some '80s action movies that don't get talked about enough.

Like with any "underrated" list, this one is sure to offend some people who feel like these picks assume they haven't seen a lot of movies that they have, of course, seen. I get it. That's happened to me on the internet. But it's not my intention at all. I didn't name the list "10 '80s Action Movies You've Never Heard Of" because this isn't Buzzfeed and I'm not an asshole. If you're a student of the genre, there's a good chance you know most or all of these movies. This is a list for those who might not be as well-versed in #HeavyAction but who are looking to explore some of the lesser-known titles in '80s action. We can all relax and talk about some kickass movies. 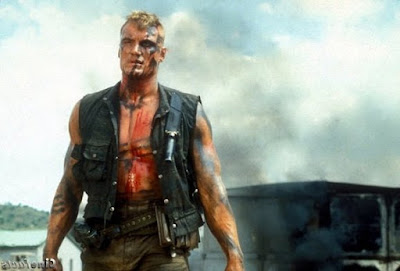 Alongside Dwight H. Little, Joseph Zito is one of the reigning kings of underrated horror and action in the 1980s. The man responsible for The Prowler, Friday the 13th: The Final Chapter (the best Friday film) and the insane Invasion U.S.A. also helped turn Dolph Lundgren into an action hero with 1989's Red Scorpion, which finds the gigantic Swede playing a Russian soldier sent to Africa to assassinate a rebel leader and quell an uprising. How long before he turns his back on the "evil Russians" (remember, this was the '80s) and begins fighting on the side of the rebels?  These days the movie is most famous for being co-written and produced by Jack Abramoff, but Joseph Zito's direction is solid and Tom Savini's makeup effects (that's right) make the violence count. There's a weird section in the middle that slows down (what Adam Thas correctly calls "that weird walkabout part"), but this is a solid action movie that bridges the '80s and '90s nicely and made a legit action star out of Dolph Lundgren, who is the best. 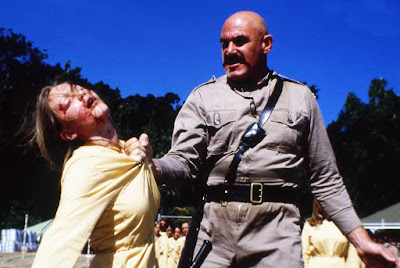 Australian cult filmmaker Brian Trenchard-Smith has made some wild movies, but none wilder than 1982's Turkey Shoot (aka Escape 2000), his dystopian vision of the future in which humans are captured and brought to an island to be hunted for sport. It's far from being a new idea, but Trenchard-Smith brings a real madness to the familiar setup that at least makes it feel new. It's brightly colored, sleazy features a weird wolf man mutant, lots of nudity and some really rough violence (the movie originally received an X rating; the uncut version is out on DVD). This is such a nasty, nasty movie. It's terrific. 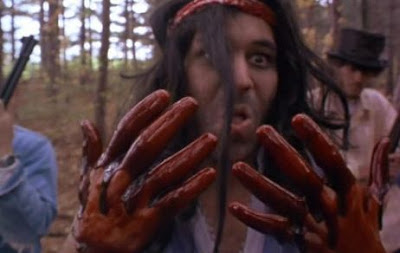 A group of Vietnam vets come back from the war and find themselves taking on a murderous cult led by Sam Raimi in a rare acting role. Besides having an incredible title, Thou Shalt Not Kill...Except (aka Stryker's War) has the same charm as the early work of Raimi and his friends -- they're a group of enthusiastic and creative people who made movies in their backyards because they love it. Both Bruce Campbell and Sheldon Lettich (future regular collaborator of Van Damme) receive story credit. The movie is crude but effective and its heart is in the right place. It is very much an exploitation movie and one that should be more widely known. 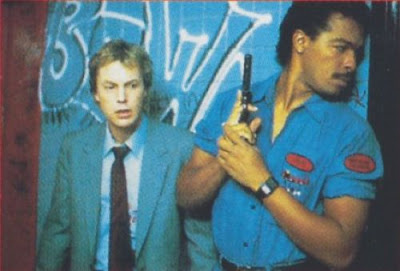 Solid siege movie from Empire pictures finds Gary Frank and Ray Parker Jr. (!) trapped in an apartment building while a gang called the Vampires -- led by Tony Todd -- tries to take them out. Parker Jr. is not a natural movie star, but this is a tight and tough little movie that has some things to say about race and class (Frank has a stack of cash he has to burn through as he navigates his way through the building). It's never been released on DVD and can be a little hard to come by, but worth seeking out if low-budget '80s action movies are your jam. If you're reading this column, I can assume they are. 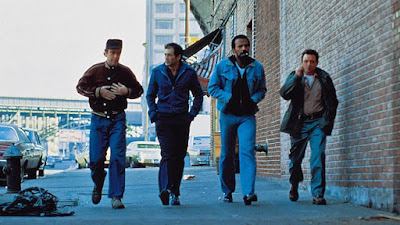 There are a few entries on this list that hardly fall under the category of "underrated," as any self-respecting #HeavyAction fan has probably seen and loves Bill Lustig's Vigilante. So let's say this is for those yet uninitiated: Robert Forster plays a New York City factory worker whose wife and son are murdered, turning him to take the law into his own hands with the help of Fred Williamson and his crew of street vigilantes. Part Guardian Angels, part Death Wish, Lustig's movie is the kind of early '80s movie depicting NYC as a terrifying war zone -- it's brutal and violent and a perfect action movie for #Junesploitation. Bonus points for the supporting cast that includes Joe Spinell and Steve James. 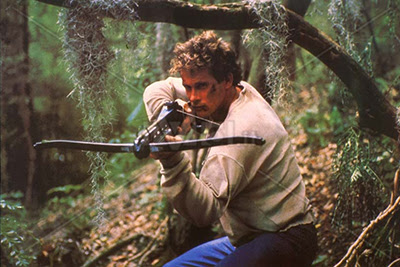 No way this list would be complete without at least one movie from Sam Firstenberg, one of Cannon's go-to directors and the guy responsible for Revenge of the Ninja, Ninja III: The Domination, Breakin' 2: Electric Boogaloo, American Ninja and American Ninja 2: The Confrontation. This, one of his three collaborations with Cannon regular Michael Dudikoff in the 1980s, is gloriously stupid, violent and trashy -- in other words, perfect Cannon fodder. It's technically a sequel to Invasion U.S.A. (Dudikoff is playing Chuck Norris' same character), though not so as you'd know it. Frequent Cannon bad guy John P. Ryan plays the leader of a shadowy right-wing cabal called the Pentangle, which Dudikoff and best friend Steve James must take down. This movie, like so many action movies in the '80s, has a Steve James problem (filmmakers make him the "best friend" and often kill him off when he should probably be the lead), but it's dopey and entertaining in the proudest Cannon tradition. 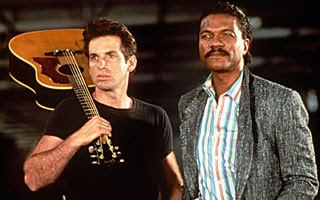 I love this buddy cop movie from Cannon, even though I'm still not sure if it's playing it straight or intended to be a spoof of buddy cop movies. Robert Carradine seems miscast as Det. Nick Barzack (aka Ber-zerk), but that's part of the fun. Billy Dee Williams gets nothing to do but be cool, sleep with women and play the jazz trumpet -- it's like he just walked off the set of a Colt .45 commercial and no one told him he was shooting a movie. It seems to be a legitimate entry in the buddy cop genre, but then we'll get a shot of Carradine cutting up pieces of raw steak with his pocket knife for dinner and chasing it with swigs of Worcestershire sauce straight from the bottle and I'm convinced it's all supposed to be funny. Fun fact: the music for the movie is done by Alf Clausen, best known for scoring 25 years of The Simpsons. Even more fun fact: this movie has four credited writers, one of whom is Jim Belushi. 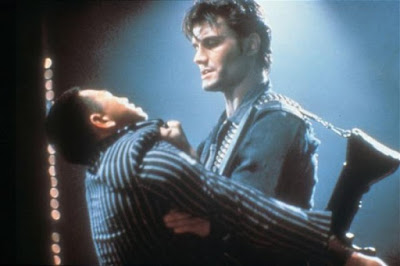 Divorce yourself from the movie's failure to do justice to the Marvel comics character (made worse because when it was made we weren't getting many comic book adaptations, making us less happy when we got one like this) and Mark Goldblatt's The Punisher is a really solid shoot-em-up action movie. Dolph Lundgren is somewhat miscast in the lead -- his physical stature, which worked so well for him in Red Scorpion, actually kind of works against him here -- and the movie gets hardly anything right about The Punisher, but Goldblatt is a devoted genre lover and knows what we want to see in nasty, R-rated movies like this. He stages good mayhem and ensures that The Punisher is crazy violent, even more so in its "uncut" form available on some European releases. 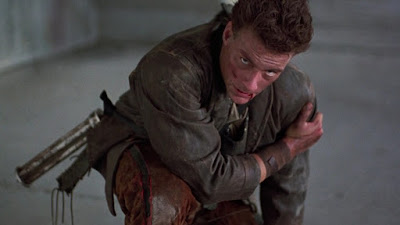 You didn't really think I would put together a list of underrated '80s action and not include at least one title from Albert Pyun, did you? While probably not his best '80s effort, Cyborg (aka Slinger, the title under which Pyun released his director's cut) is probably the film of his from that decade which can most easily be classified as an action movie. It's messy, having been re-cut and re-scored, but has a cool post-apocalyptic vibe about it and works with very little dialogue. Pyun originally envisioned making a rock opera; instead, he made a futuristic western. 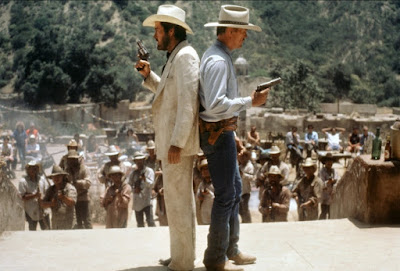 1. Extreme Prejudice (1987, dir. Walter Hill) Again, is it underrated? Anyone who's seen it has to agree that Extreme Prejudice is one of the toughest, baddest, most kickass action movies of the '80s. It's on the list because not enough people have seen it. This is the movie Sam Peckinpah would have made if he was still alive -- a showdown between two towering figures on opposite sides of the law and a murderers' row of a cast that includes Nick Nolte, Powers Booth, Michael Ironside, Clancy Brown, William Forsythe and Rip Torn. This movie is so good! SO GOOD. It has only received a lousy full frame DVD release in the U.S. (from now-defunct Artisan Entertainment) but is out on Blu-ray in the UK.
Posted by Patrick Bromley at 12:00 PM