This week, I play with toys and ponder columns past and future.

Good evening and welcome, ladies and gentlemen, to another evening of MMA (Mixed Monster Action) fighting, brought to you by F This Move! and the fine folks at GameStop and AMC Theaters. 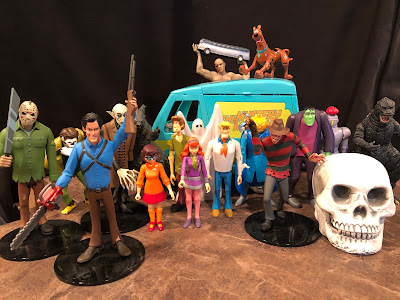 The crowd assembled here is larger than we expected, given how slowly the US Vaccination Program has been rolling out. Tell Scooby-Doo and his crew of freaks to put on some damn masks! Suffice it to say, these fans are primed for action and in the mood for some real grudge-match-type fighting here tonight! 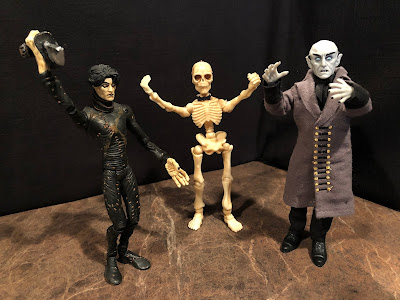 ROUND #1: Cesare from The Cabinet of Dr. Caligari VS. Nosferatu! Cesare is of course played by Conrad Veidt (who would later play Major Strasser in Casablanca.) He exists to do the evil bidding of his master, Dr. Caligari. I don’t own an action figure of Dr. Caligari in this scale or, rest assured, Caligari would surely be Cesare’s cornerman. Nosferatu is the star of the first big-budget adaptation of Bram Stoker’s Dracula. Stoker’s widow sued to have all the prints destroyed because the filmmakers failed to get the rights to the book. Don’t worry, fang fans, you can’t keep a good vampire down! The skeleton is the referee. Our first round throws together two monsters about whom I have never written. Those blank spaces will be filled in sooner rather than later, so stay tuned. 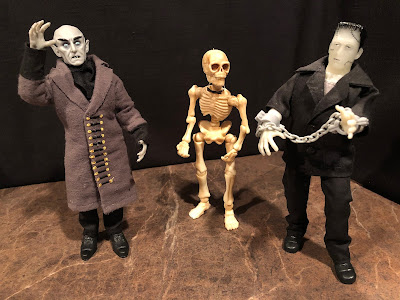 And the winner is Nosferatu. He’s causing the doors of the venue to all open suddenly with his mind. He’s running around the ring in fast motion. But wait! Nosferatu’s next opponent is Frankenstein’s Monster. This plucky assemblage of miscellaneous body parts will come out swinging; he’s big, he’s bad, and he’s angry, given that he has been alternatively tortured and ignored since he was brought to life. (A few years ago, I wrote a column about old Frank, of which I am still particularly proud. You can find it here. 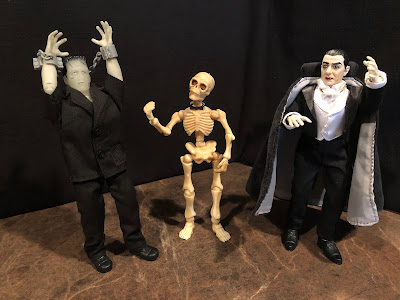 And the winner is Frankenstein’s Monster! No surprise there—with his super strength and bad attitude, he quickly pulled Nosferatu’s head clean off and threw it into the cheap seats. Don’t tell me those frugal fans didn’t get their money’s worth TONIGHT! That means Frankenstein’s Monster will next fight Dracula, which makes sense considering how many movies they have appeared in together: House of Dracula, House of Frankenstein, Abbott & Costello Meet Frankenstein, and the late Al Adamson’s drive-in cheese-fest, Dracula Vs. Frankenstein. Why hasn’t anyone at F This Movie! written about that one? Huh? Why? That’s NOT a rhetorical question. Why are you all looking at me? (I have, however, written about the 1931 Universal Dracula. You can find that column here.)

And Dracula is the winner! I knew it was all over for Frankenstein’s Monster when Dracula started doing that crazy thing he does with his hypnotic eyes and his double-jointed fingers. Once the Monster was under his spell, it was just a matter of time. I could not believe that any creature, even a man-made one, could survive so many kicks to the kidneys! 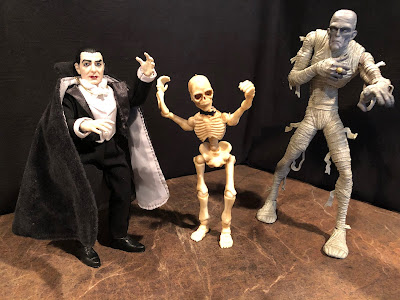 Dracula doesn’t even look fazed by his first bout, and as long as the sun hasn’t risen, he is ready for his next opponent, the Mummy. The Mummy’s shambling gait is bound to be a handicap in this match—but the two opponents are, interestingly enough, almost the same age, so we’re looking forward to some strangling, biting, strangling, sucking, strangling action!

It’s indeed interesting that Count Dracula and the Mummy are matched for this bout. The two Universal films that introduced them to pop culture bear more than a few similarities. (Revisit that column here.) Now here come our lovely Card Girls to announce the next round! 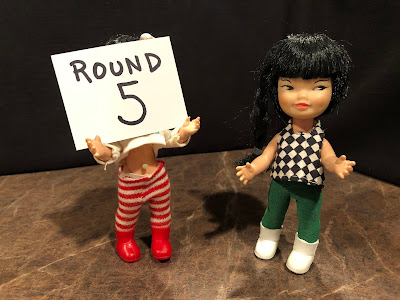 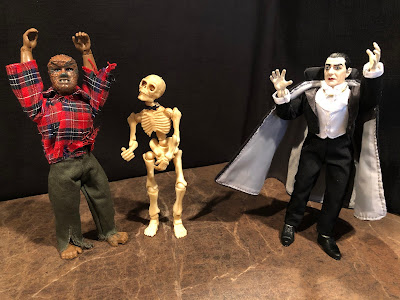 Our next bout is Count Dracula VS. The Wolf Man. The last time these two spunky stalwarts got together, Drac had just transformed himself into a bat when Wolf Man hurled himself out of a castle window, grabbed the now-winged mammal in mid-air, and plunged twenty stories to the jagged rocks below (spoiler alert: THEY DIED, because comedy) in Abbott & Costello Meet Frankenstein. Dracula has a lot to prove here. This bout might not go well for Larry “Wolf Man” Talbot; he has incredibly bad luck and has lived a tragic life. (You can read that column here.) 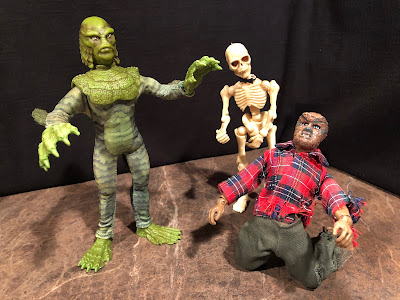 And Drac is (…wait for it…) down for the Count! The winner is our hairy hero, audience favorite The Wolf Man. Fight fans know that “even a man who is pure of heart and says his prayers by night, can really kick a vampire’s ass if the prize money is right.” Our next match is the Wolf Man VS. the Creature from the Black Lagoon, which some wags are referring to on their fight cards as “Surf & Turf.” Clearly, the Creature faces a non-aquatic-venue challenge here. Talk about a “fish out of water” scenario! (I’ve got the Creature covered; he’s my favorite Universal monster. Read that column here.) 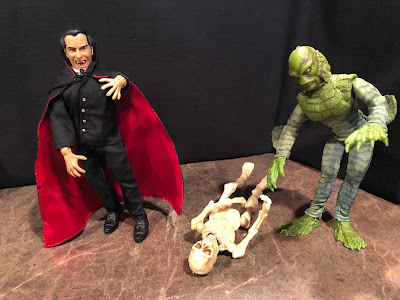 And the Creature has drowned the Wolf Man. Like an ancient ankle-grabber from the deep, I did not see that one coming! The Creature will now dry off... and then square off against Hammer Film’s Dracula, Christopher Lee! I’m at a loss to pick a favorite here. In a future “Hammer” podcast, Patrick Bromley and I will take on all of Hammer’s Dracula films—so stay tuned! Unholy Moley! Dracula has killed the referee. 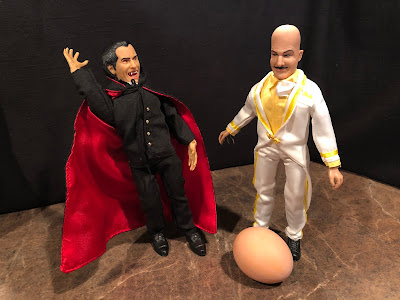 Dracula has made short work of the Creature and will now face Vincent Price as Batman villain, Egghead. If all of the sports fans reading this are wondering about the sudden turn to surreal whimsey, these are the only MEGO action figures I own... and the quarantine is STARTING TO WARP MY TINY LITTLE BRAIN. (Patrick Bromley and my tiny little brain once recorded a delightful podcast, during which we sang Price’s praises. You can find that podcast here.) 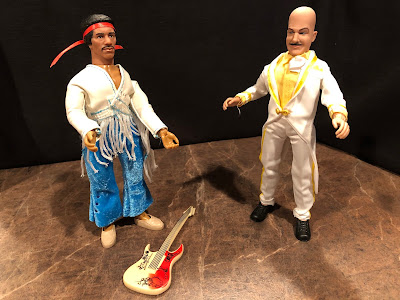 Egghead has scrambled Dracula, and I must say it’s one of the most eggs-cellent prize fights that I have ever seen! Truly eggs-traordinary, top shell-f entertainment! I wonder if Egghead can bring that same fierce spirit to his next opponent who, by all reports, can “stand up by the mountain, chop it down with the edge of (his) hand”—Jimi Hendrix! 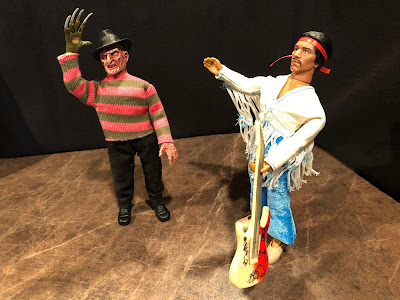 Jimi Hendrix made short work of Vincent Price, sending him back into his gourmet kitchen to whip up some egg and pimento appetizers for his appearance on The Dinah Shore Show next Wednesday. Our final bout of the evening will pit guitar shredder Hendrix VS. teenager-shredder Freddy Krueger. Las Vegas oddsmakers are scratching their heads over what to make of this strange match-up. Anyone’s guess is as good as mine. Uh-oh! Jimi is raising his Stratocaster OVER HIS HEAD... I think... I think... Hendrix is lighting it on FIRE... and it is “good night” to Krueger! Looks like “Jimi’s your boyfriend now!” 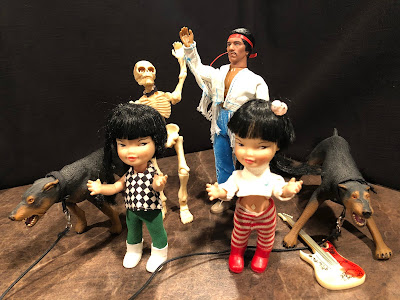 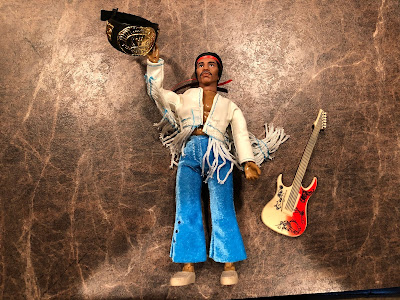 This column stands as silent testimony as to just how loony one can go during the tenth goddamn month of a pandemic quarantine. I’d like to thank Heath Holland over at Cereal at Midnight for keeping me up to date on MEGO action figures. (If you’ve never checked out Heath’s website and YouTube-machine channel, what are you waiting for?) Thanks also to my lovely wife Jan for her vintage Remco “Jan” dolls and for always heeding my call on a cold Saturday morning when I shout things like, “Can you make a teeny tiny bowtie for this little skeleton? HE’S THE REF!”
Posted by Patrick Bromley at 5:00 AM