A tiny column that befits a tiny mouse.

I recently realized that I had not seen MouseHunt since its original release in 1997. I remember that screening well. The film was DreamWorks’s gala Christmas offering and I saw it with my then-seven-year-old son. We both loved it. Spinning the Blu-ray disc a few days ago, I wondered with bated breath, “Will this film hold up... or will the dreaded Goonies Derivation extract its terrible toll?” (Spoiler Alert: It holds up GREAT.)

The Plot in Brief: Brothers Ernie and Lars Smuntz (Nathan Lane and Lee Evans) are shocked to learn upon their father’s death that their only inheritance is debt. Sure, there’s the ramshackle string factory that the old man founded and toiled in for decades. There is an old mansion on a hill that he won in a bet... plus a large ceramic egg and a box of very old Cuban cigars. The brothers have never been close but, after a series of events that bankrupts them both, they move into the mansion together.

They soon learn that the house may be more valuable than they first suspected. The downside is that the house already had one occupant: a pesky mouse that causes all sorts of trouble. Bone-crunching hi-jinx ensue. 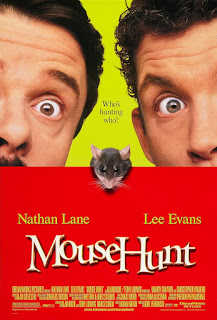 I wasn’t expecting a whole lot 23 years ago when I stepped up to buy our tickets to MouseHunt: Maybe some generic slapstick, mundane jokes, Nathan Lane phoning it in for a paycheck. What my son and I received on that snowy December day was so much more than that. I experienced a similar buoyancy during my recent re-watch. What may have been initially pitched to the studio as a mouse-centric Home Alone clone (#CloneAHomeAlone) springs to life as all who were involved in the film choose to work to the fullest extent of their abilities. This is a very funny film. At one point, Lee Evans points out that the mouse they have been chasing was able to retrieve an olive from a standard mouse trap, eat the olive, and leave the pit. Evans thinks the mouse did that “just to razz us,” Nathan Lane replies (with typical Nathan Lane sarcasm) “Oh, yeah! [The mouse] is sitting there in a smoking jacket, sipping cognac, and saying, “I left the pit!”

MouseHunt was directed by Gore Verbinski, five years before The Ring and Pirates of the Caribbean made him a household name. I think Verbinski’s a talented director; unfortunately, it seems he’s still in move jail after directing the ill-fated Lone Ranger in 2013. (#FreeGore) 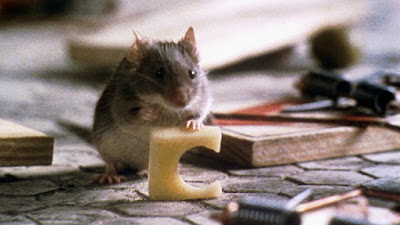 Like most films that I hold close to my heart, MouseHunt features a parade of character actors doing what they do best (please imagine I’ve tacked the epithet “the great” before each of these names): Maury Chaykin (The Sweet Hereafter, My Cousin Vinny); Michael Jeter (Hair, The Fisher King); William Hickey (Prizzi’s Honor, National Lampoon’s Christmas Vacation) in his final performance; Ernie Sabella (Quiz Show, The Lion King); Annabelle Gurwitch (The Cable Guy, TBS’s Dinner and a Movie); Eric Christmas (Harold & Maude, Porky’s); and Vicki Lewis (Godzilla, Finding Nemo). Whew! 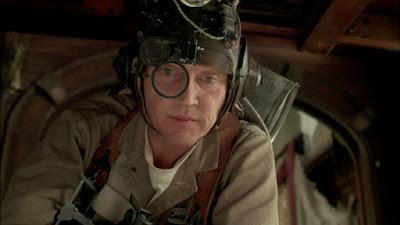 I would argue that this is one of Christopher Walken’s last performances before lapsing into self-parody. Some young people might not remember how great Walken used to be. Before a hundred mediocre stand-up comedians added mediocre Walken impressions to their acts and before SNL conferred “cultural icon” status, we had “Peak Walken:” Pennies from Heaven, Annie Hall, True Romance, and the music video for Fatboy Slim’s “Weapon of Choice.”

Still, the real star of this show might just be cinematographer Phedon Papamichael, who toiled for 20 years on fun but boilerplate movies like Poison Ivy, Cool Runnings, and Bio-Dome. MouseHunt was one of the first films to show the full range of his abilities and THIS FILM IS BEAUTIFUL TO LOOK AT, with an odd green moldy sheen that reinforces the period and enhances the comedy. This is one of the handsomest comedies of the last 25 years. Even when both protagonists are covered in shit (Spoiler Alert!) the film has a classy, antique glow. More recent Papamichael-lensed films include Walk the Line, Nebraska, and Ford v. Ferrari.

QUIBBLE: MouseHunt could stand to lose ten or twelve minutes. 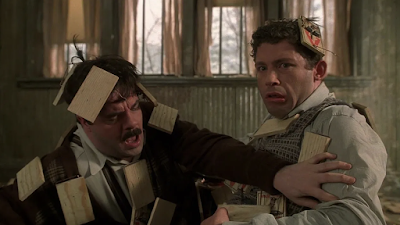 Essentially, this is a 98-minute Road-Runner cartoon and it has no right to work as well as it does. There are extended sequences in the film that would make both Rube Goldberg and Buster Keaton proud. The use of trained animals, animatronics, and CGI works great and is largely seamless. I love the painstaking detail on the miniature sets built so that the trained mice had room to roam. The animatronic mice were designed and built by the Stan Winston studios. The charming score is by Alan Silvestri, who I found here to be channeling the spirit of Danny Elfman. This is the rare American comedy from the 1990s that is both jaw-droppingly brutal and unexpectedly sweet.

MouseHunt seems to have dropped off the radar since its original release. I can’t remember a time I ever saw it on broadcast television or cable. It’s currently streaming on the Netflix machine.

Hey, gang! Let’s put this funny little gem back on the radar!
Posted by Patrick Bromley at 5:00 AM