Movies is Good: To New Horizons

The continued pandemic quarantine/NOLOV4ME (Negligent and Ongoing Lack of Vaccine for Me) situation spells a few more weeks under lockdown for anyone with any sense or any co-morbidities. If you have received your vaccine, congratulations. Also, fuck you.

Just kidding! Give me a hug?

Today, we turn our attention to the world of physical media and discover that there is indeed much to be excited about as we wait and wait and wait out the next six months.

I am so gosh-darn pleased that... ahem... “content providers” are taking advantage of a vast, captive audience to feed our insatiable hunger for little shiny discs.

TODAY (Tuesday, February 24)
Pump Up the Volume (Warner Archive): Almost a year ago to the day I wrote about this terrific teen angst film and both readers and myself got our collective panties in a bunch because there was no Blu-ray release and the DVD was crappy looking and overpriced on the collector’s market. Someone was listening over at the Warner Archive and today we have this beautiful new Blu-ray (Spoiler Alert: I have not seen this disc yet.) JB says check it out! 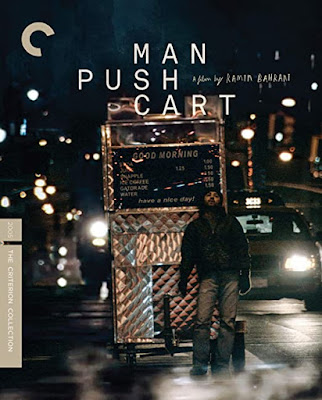 Man Push Cart (Criterion Collection): I have only ever seen this little gem once: at the 2006 Roger Ebert Overlooked Film Festival in Champaign, Illinois many, many moons ago. I remember being completely blown away by it, and I’m looking forward to the film receiving the deluxe Criterion treatment. How many films did Roger Ebert introduce all of us to that we might not have seen otherwise? Thanks, Roger. 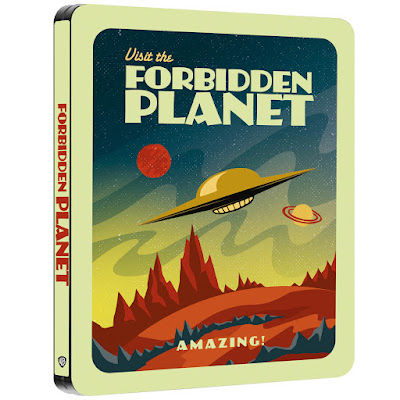 MARCH 1
Forbidden Planet (Zavvi): British boutique label Zavvi is re-releasing some American sci-fi gems in steel books designed to look like vintage travel posters. Gimmicky? You bet. Will I be picking up the hip and stylish Forbidden Planet disc? You bet. The film needs no introduction, being one of the ten best Hollywood sci-fi films of all time. Extras seem to be the same as the previous Blu-ray release, which means you get the bonus feature film The Invisible Boy because Robby the Robot is in that one too. The cover is beautiful. 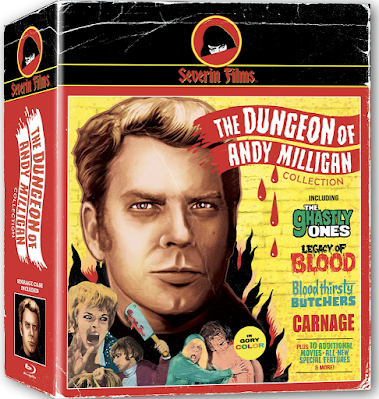 MARCH 16
The Dungeon of Andy Milligan Collection (Severin Films) Following on the heels of their fantastically popular (and now out of print) Al Adamson boxset last year, Severin introduces the whole Blu-ray-loving world to the strange works of auteur Andy Milligan. Described by Diabolique magazine as “the gay sadist who pioneered New York’s avant-garde theater world,” Milligan’s films are not for everyone. The new boxset features 14 films on 8 discs with loads of extras, audio commentaries, a bonus CD of electronic music, and a 128-page book by Stephen Thrower. Again, this looks right up my New York alley, but be advised that I would not classify Milligan’s work as “so bad, it’s good.” I would call it, “so bad, it’s really, really bad.” Yummy.

SPOILER ALERT: The larger and more expensive “Dungeon Bundle,” featuring everything in the smaller boxset, a second book, an Andy Milligan enamel pin, a refrigerator magnet and five stickers IS ALREADY SOLD OUT. Boo. 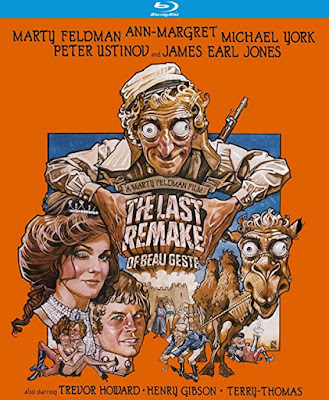 The Last Remake of Beau Geste/In God We Trust (Kino Lober): KL Studio Classics really plumbs the depths of the late 1970s/early 1980s comedy barrel in releasing these two unassuming but charming films from writer/director Marty Feldman. I remember both of these films being pleasant and funny, though I’ve barely thought of them at all since their release. Beau Geste was the first time I had ever seen Michael York (Basil Exposition in the Austin Powers films) play comedy. At the time I wished that In God We Trust had been a little sharper in its satire of modern religion. Andy Kaufman appears as a crazed televangelist named Armageddon T. Thunderbird.

The fact that either of these films exist at all is quite a journey: the “Mel Brooks Comedy Juggernaut” of the early-to-mid-1970s begat the “Gene Wilder Comedy Mini-Juggernaut” of the mid ’70s (Gene Wilder starred in a couple of Brooks films before he co-wrote and starred in Young Frankenstein.) That in turn begat the “Marty Feldman Comedy Mini-Mini-Juggernaut” of the late ’70s/early ’80s (Marty Feldman co-starred in both Young Frankenstein and Silent Movie; then co-starred in the film Wilder wrote, directed, and starred in, The Adventures of Sherlock Holmes’s Smarter Brother, before making the two new releases referenced here.) Inde est ars arti! Understand? 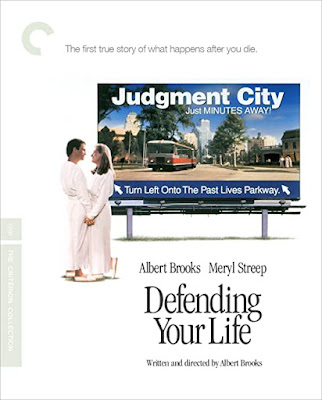 MARCH 30
The Bad News Bears (Paramount): Yet another classic American film to never before receive a Blu-ray release. Thanks, Paramount! Can’t wait to see this one. The old DVD looks like shit.

Defending Your Life (Criterion Collection): One of Albert Brooks’s best films gets a spiffy new Criterion disc. The “Hall of Past Lives” sequence is worth the price of admission alone. Also, there is something epic about Albert Brooks singing along to Barbra Streisand in his car right before the film’s inciting incident. The song they are singing is, of course, “Something’s Coming” from West Side Story. (#details)

The Ten Commandments (Paramount): The subject of my very first column ever get a 4K spif-aroo*. I wonder if the improved soundtrack will lend extra biblical gravitas to lines like, “A chariot? Here in Goshen?” Bonus points to this movie for including delightful supporting performances from Anne Baxter, Edward G. Robinson, John Carradine, Woody Strode, Vincent Price, and Henry Wilcoxon, who played the priest in Caddyshack. 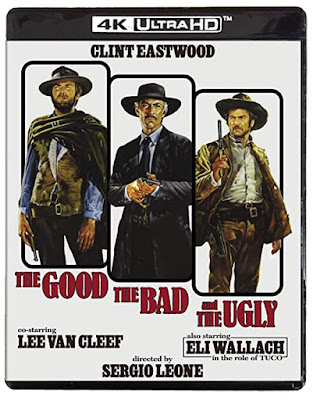 APRIL 27
The Good, the Bad, and the Ugly (KL Studio Classics): The great Sergio Leone spaghetti western that gave me my ringtone comes to 4K Blu-ray*. The most recent Blu-ray release was eye-popping, so I wonder how much more this image can be improved. Maybe on this version, after Eastwood shoots, you’ll glance down at your shirt front... and you’ll be bleeding.

Masculin Féminin (Criterion Collection): My favorite Godard film finally gets the Criterion Blu-ray treatment after many years as a Criterion DVD-only release. This seems to be Godard’s hipper, crazier answer to the string of films Francois Truffaut made with Jean-Pierre Leaud in the late 1950s and early ’60s. Pay very close attention to the amazing sequence where Godard has the characters’ dialogue play naturally but the action is presented as a series of jarring jump cuts. Heaven.

A WORD TO THE WISE: Masculin Féminin contains the song “Tu M’as Trop Menti” (“You Lied to Me Too Much”) sung by Chantal Goya. Once you hear it even a single time, it is impossible to get out of your head. Don’t believe me? You’ve been warned! 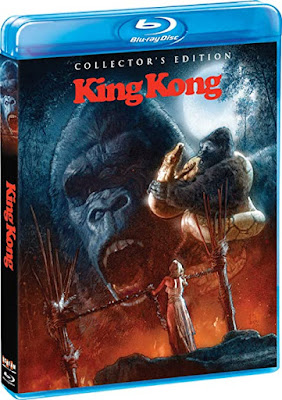 MAY 11
King Kong (1976) (Shout Factory): Patrick and I recently recorded a podcast on this... interesting... little film and we bemoaned the lack of a sparkling disc release. Someone was listening! SOMEONE IS ALWAYS LISTENING. (#pandemicparanoia)

Fast Times at Ridgemont High (Criterion Collection): The second film in what I call the “Sacred Rites of the American Teenager” trilogy gets the Criterion treatment. Criterion has already released Dazed and Confused... can American Graffiti be far behind? 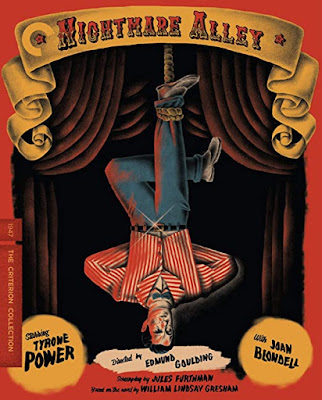 MAY 25
Nightmare Alley (Criterion Collection): Sure, Fast Times has gotten all the attention since Criterion announced its #MaySlate last week, but this is the film I am most excited about. An overlooked gem from the true era of film noir, Nightmare Alley is like no other film I have ever seen. Concerning itself with carnival life, the film takes a detour into the land of conmen and fake psychics. Imagine a movie that somehow grafts the best parts of Tod Browning’s Freaks with the best parts of George Roy Hill’s The Sting (#stingingfreaks). Exactly! This was partially filmed on State Street in good, old Chicago, Illinois. Could the fact that Guillermo Del Toro just announced plans to film a remake have anything to do with this remarkable film getting a proper Blu-ray release? I certainly hope so. 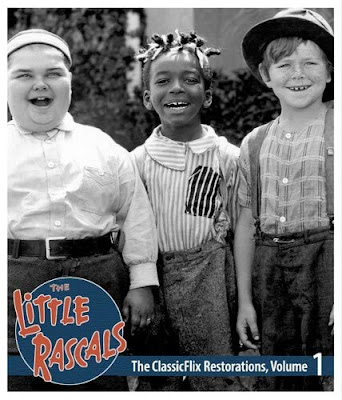 JUNE 1
Little Rascals, Volume 1 (Classic Flix): Boutique video label Classic Flix did some sort of Kick-funding Crowd-starter to bankroll the restoration of these classic shorts. If you contributed, your name is in the credits of this disc. These shorts are vintage Americana and quite funny and charming to boot, if you can ignore the occasional cringes of “charming racism” and “homespun misogyny” endemic to comedies of the 1930s. I’m really looking forward to this release. One of my favorite stand-up comedians, Robert Klein, does a memorable routine on these famous Hal Roach shorts. You can find it here.

...and that takes us to June. With the best of luck, I will be thoroughly inoculated and thoroughly intoxicated by then. (#inocintox) I will then travel West, visit my beloved son, purchase a condo and a coffin in beautiful Oxnard, California (#CovidCondoCoffin) and begin the third chapter of my life.

Oops, that got dark! Luckily, I have all these new releases to buoy my spirits.

Give me a hug?

* C’mon! Those of you who haven’t hopped aboard the 4K bandwagon yet, now is the time. It’s astounding, it’s gorgeous, and it’s virtually obsolete so a bunch of these labels are dumping stuff onto the format now while there is still a dollar to be made. Yes, I said it: almost obsolete. Do you really want to miss the experience of staring at a virtually USELESS player in about two years because everything has gone to streaming, so discs are no longer manufactured? Don’t you LONG to wipe a single tear from your cheek as you haul your 4K Blu-ray player into the dank basement or dusty attic that also houses your Sony Betamax, “needle-vision” CED videodisc rig, Pioneer laserdisc player, Play-station Portable UMD discs... and all of your vintage flipbooks and Edison wax cylinders from the turn of the last century? Yeah, just pile all that stuff over by my Kinetoscope. C’mon, write a check and join our sad club!

True beauty is fleeting, my friends.
Posted by Patrick Bromley at 5:00 AM