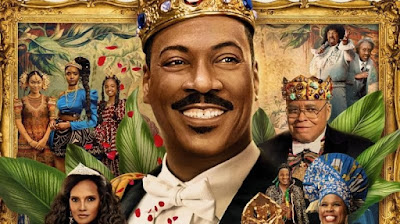 In which Zamunda takes a victory lap.

It’s easy to forget that John Landis’ Coming to America was arguably the last we got of Peak Eddie Murphy, the final entry in a decade’s worth of memorable outings that cemented his place as one of the era’s (era’s) most powerful pop cultural forces. By 1988, Murphy had perfected the star persona honed in 48 Hrs, Beverly Hills Cop, and Trading Places, but the dog days and Harlem Nights were not far away. Landis, too, was mired in creative and commercial malaise, licking his wounds after a string of box office bombs and legal complications due to the Twilight Zone tragedy. Revisiting Coming to America in 2021 feels a bit like watching two veteran pitchers throw their best fastballs, confident in their delivery if not in their waning velocity.

Still, it’s fertile ground for a sequel, bringing us to the frustratingly-if-predictably titled Coming 2 America (Seriously, how are we supposed to distinguish between them in conversation?). Murphy returns as Prince Akeem Joffer of Zamunda, who is celebrating the thirtieth anniversary of his wedding to Lisa (Shari Headley) alongside their three daughters (KiKi Layne, Bella Murphy, and Akiley Love). Familiar faces return, including Arsenio Hall as Akeem’s friend and advisor, Semmi, James Earl Jones as King Jaffe Joffer, and John Amos as Lisa’s father, Cleo McDowell. Though Zamunda has prospered in the past three decades, neighboring warlord General Izzi (Wesley Snipes) and his armies sense weakness in Akeem’s rule, as he has no male heir to continue his dynasty. 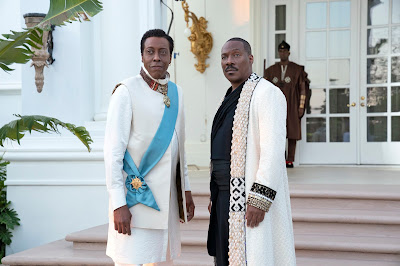 It’s convenient, then, that royal witch doctor Baba (also Hall) has had a vision: Akeem has an illegitimate son in America! Through flashbacks to the original movie (and some solid de-aging technology), we learn that Akeem had a night of hap-hazard relations with Mary Junson (Leslie Jones) before he met his beloved Lisa, which produced a son named Lavelle (Jermaine Fowler). Though young Princess Meeka (Layne) is a fiercely intelligent and progressive force in the royal family, tradition dictates that Akeem and Semmi return to Queens and retrieve the prince-to-be. They quickly find Lavelle and Mary in dire financial straits, and the Junsons (along with Tracy Morgan as Uncle Reem) are more than happy to hop on a private jet and live royally.

From there, director Craig Brewer (Black Snake Moan, Dolemite is My Name) and his gaggle of screenwriters reverse the original movie’s fish-out-of-water structure, as Lavelle learns what it means to be a Prince of Zamunda. All your favorite Coming to America jokes and side characters make comebacks, as well, with Snipes and Jones in particular adding fresh dynamics to a familiar story. Knowing full well that legacy sequels are almost always a desperate miscalculation on the part of aging stars with delicate egos, Murphy and company lean into the absurdity of a Coming to America sequel whenever possible, with Lavelle and royal groomer Mirembe (the outstanding and underused Nomzamo Mbatha) even discussing the lack of creativity in American media as they tip-toe their way towards young love. 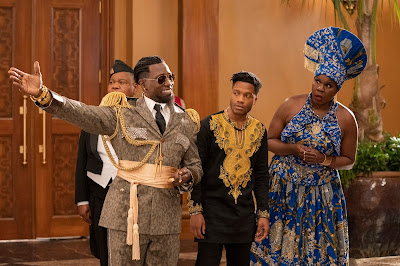 And although Coming 2 America often threatens to topple over under the weight of its own fanservice, it recovers in the back half with a surprising amount of heart and integrity. Despite all obstacles, this is actually a very effective sequel to Coming to America, with Akeem retaining the story’s emotional core and fulfilling some of the promises left hanging in the original. The young prince may have traveled to America to bring his home into the 21st Century, but the seated king has grown soft and lazy in middle age; he has confused tradition with stagnancy and forgotten the freedom of spirit that burns within Lavelle and Meeka. Murphy never quite stretches himself in his return to the role, but he and Headley (who, thankfully, has a bit more to do than in the original) share a few scenes that show how far the two characters have come. 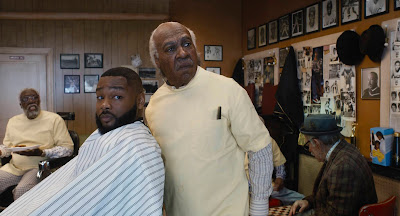 Perhaps the best parts of Coming 2 America are what it doesn’t try to do, namely asking Jermaine Fowler to take over the air he’s sharing with Eddie Murphy. The Sorry to Bother You star doesn’t bother with impressions or bold character choices. He knows his place among these loud and legendary personalities and keeps Lavelle squarely in the Straight Man column unless absolutely necessary. While this doesn’t necessarily make for an engaging sequel protagonist, it does reflect a level of respect for the audience that many sequels of this ilk wouldn’t possess: Brewer and his team know the difference between “Coming to America Again” and “Another Coming to America Story,” and it’s much appreciated. In short: Coming 2 America is a good time, more than reward enough for one Friday evening click on the Amazon Prime button.
Posted by Patrick Bromley at 5:00 AM