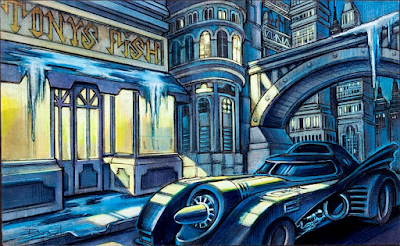 A new series looking at the unproduced blockbusters that might have been.

If you tuned into our Last Action Hero episode a few weeks back, you might have heard me discuss its demented first screenplay draft -- the one in which Schwarzennegger’s Jack Slater is a Dirty Harry-esque fascist and Danny Madigan is a tortured soul set on a mission of vengeance by a literal manifestation of Satan himself. Researching that screenplay led me to the unproduced Star Wars: Duel of the Fates, the Episode IX draft that Colin Trevorrow wrote with Derek Connolly before being replaced by J. J. Abrams. After that, well, I just kept going! Filmmaking is a long, arduous process, and taking a peek at the early stages of our favorite blockbusters can often give us a deeper appreciation of the final products. It turns out that reading movies is fun! Backdrafts will dig into early versions of films that were eventually produced, sequel drafts that were left on the shelf, and everything in-between. Let’s start with the original screenplay for Batman II, the would-be follow-up to Tim Burton’s 1989 phenomenon. 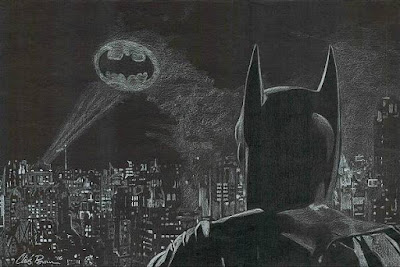 Penned by Batman co-writer Sam Hamm, Batman II opens with an inspired line of description: “It’s finally happened. Hell’s frozen over.” That’s right, it’s Christmastime in Gotham City! As shoppers scuttle about making last-minute purchases, a group of jewel thieves stages a daring heist. Fleeing the scene on snowmobiles, the crooks soon find themselves pursued by Batman, who unleashes all manner of homing missiles and grappling hooks to end a daring chase through Gotham Park. Though Commissioner Gordon decries him as a menace, Batman is inspiring real action in his city, especially in a group of vigilantes calling themselves The Order of the Bat (think Frank Miller’s “Sons of the Batman'' from The Dark Knight Returns). Ordinary citizens are pushing back against greedy real estate developers and business magnates like Randall Shaw and Walter Barrett, who soon find themselves public enemies and targets of Gotham’s seedy underworld.

Despite the unrest, Bruce Wayne is enjoying an unprecedented stretch of peace and harmony. His relationship with photojournalist Vicki Vale is flourishing, with the pair frequently collaborating on projects that will improve the lives of Gotham’s least fortunate. Trouble soon arrives, however, in the form of Selina Kyle, a sultry museum curator whose eyes (and other parts) are fixed firmly on Bruce. Though Mr. Wayne is understandably smitten, he soon learns that Selina is moonlighting as Catwoman, a skilled burglar in the employ of Mr. Boniface, referred to by his enemies as The Penguin. No common criminal, the beak-nosed Mr. Boniface is on the hunt for Gotham’s most valuable items: Five raven statuettes (think Maltese falcons), one owned by each of the city’s five founding families. Together, they show the way to a treasure greater than any amassed in history. As Batman navigates these personal and professional challenges, he uncovers a conspiracy that threatens the entire legacy of the Wayne family. 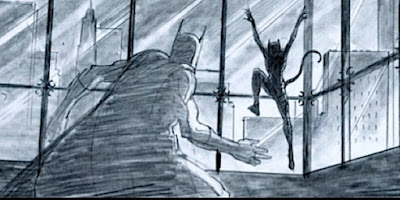 The most obvious point must come first: Sam Hamm’s Batman II is just not a Tim Burton film. There’s far too much action, far too much plot, and far too little idiosyncrasy to be of any interest to the goth auteur at the height of his commercial power. Once Burton officially signed on to direct, Daniel Waters (Heathers) and an uncredited Wesley Strick (Arachnophobia) reworked the story into the Batman Returns we eventually got in 1992. It’s a much gnarlier movie, frankly, one that sympathizes far more with its monstrous villains than with its trust fund hero. Though Mr. Boniface’s plan is coherent in a way that Oswald Cobblepot’s baby-kidnapping mayor scheme never is, it seems to be rooted entirely in greed, lacking the pathos of the orphan Cobblepot searching for his place in the world. And while Batman Returns granted its downtrodden secretary Selina Kyle her delicious revenge against an oppressive patriarchy, this version of the character is — no joke — solely defined by her sadomasochistic horniness. It’s...not great.
There are elements that do work, however, including the raven statuette subplot, which regular Batman readers might compare to Scott Snyder’s 2011 “Court of Owls” storyline. Apparently aware of the internet’s favorite criticism — that Bruce Wayne could do far more as a philanthropist than as a vigilante — this version of the character strives to take genuine action against the tightly-woven fraternity of parasitic one-percenters who have pushed the rest of Gotham City to the brink of catastrophe. Finding out that the Wayne family is part of that original sin — and that his father may not have been the virtuous man he’d always thought him to be — is an interesting wrinkle in Bruce’s internal mythology. It’s not fleshed out dramatically in this draft, but it may have developed into something truly fascinating had Batman II been helmed by a director with any interest in Batman. Hamm’s final set piece — a battle in and underneath Wayne Manor — would carry strong symbolic weight in this regard. 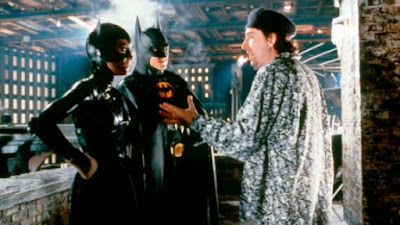 But it’s the bits that don’t work that leave Batman II wanting. Bits like Dick Grayson, introduced here as a homeless vigilante who saves Vicki Vale from muggers in Gotham Park. Though his presence makes sense thematically, Hamm doesn’t develop enough of a bond between him and Bruce to warrant his inclusion in the final showdown. Nor are Vale’s damseling and Designated Girl Fight with Catwoman particularly inspiring. Both characters feel a bit forced, and cutting them from the final movie was a wise move. In the end, Batman Returns is simply more interesting to watch. Essentially an $80 million art installation, it’s the kind of defiant absurdist theater that Burton could only hint at in his 1989 original. Hamm’s elaborate outdoor chases and underground battle scenes may have read well on the page, but they would have eaten into Burton’s penguin rocket budget. And aren’t rocket-powered penguins what Batman is really all about?
Posted by Patrick Bromley at 5:00 AM