Reserved Seating Swings for the Fences: THE SANDLOT 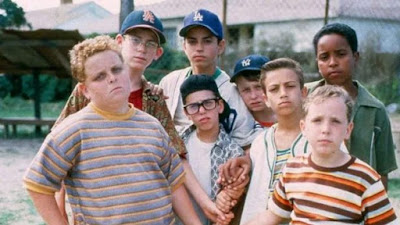 The review duo who were saved by Wendy Peffercorn.

Adam: Our baseball series returns with a look back at one of the most beloved baseball movies ever made, 1993’s The Sandlot, directed by David Mickey Evans (First Kid, The Sandlot 2). The film tells the story of a shy kid named Scotty Smalls (Tom Guiry) who moves to a new neighborhood with his mom (Karen Allen) and stepdad (Denis Leary). After a false start or two, Scotty becomes friends with a group of kids who love nothing more than playing baseball all day every day at the local sandlot each summer. The boys run into trouble when their baseball (that Scotty takes from his stepdad and happens to be signed by none other than Babe Ruth) flies over the fence and into the yard of Mr. Mertle (James Earl Jones) who has a guard dog of local infamy named The Beast protecting his property.

Rob: Imagine explaining to kids who grew up on the MCU that the inciting incident of one of the defining kids’ movies of the ‘90s is “a ball went over a fence.”

Adam: Life was simpler in 1993. The Sandlot is a cornerstone movie of my youth. I saw it on video in 1993 and it became a movie that my friends and I shared, quoted, imitated, and rewatched again and again. One of the first podcasts I did on F This Movie! was for The Sandlot and it’s somewhat a regret of mine because I came at the movie for the first time from a snarky place and not one as sincere as I usually have. Now that I’ve outgrown being a smartass (not entirely, but mostly), I can say again that I think The Sandlot rules. It does a lot of things right including just simply working as a comedy, baseball movie notwithstanding. But as a baseball movie, it feels very authentic and in a way not many baseball movies do. The Sandlot is one of the few movies that shows how many people fall in love with the game and that’s by playing it as a youth with a group of friends.

What’s your history with The Sandlot and how did it hold up for you on this viewing? 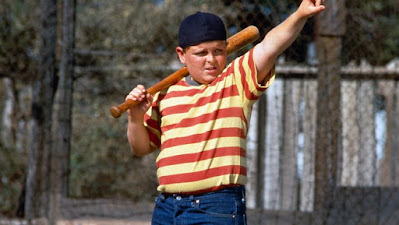 Rob: This was maybe only the third or fourth time I’d seen The Sandlot. I liked it when I first saw it (and grew to know it well enough to quote in conversation), but I never really connected with it enough in my early years that I wanted to watch it over and over. I think I know why: Adolescent cult classics like The Sandlot, The Goonies, and Stand By Me really make sense to kids with lots of siblings and/or childhood friends. I had neither. I moved a lot growing up, my divorced parents didn’t remarry and have more kids until I was older, and I didn’t establish a core group of best friends until later in middle school (though I am proud to say we’re all still inseparable). I was a lot like Smalls, I guess, but I spent weekends at my dad’s while my friends were at the sandlot. As a result, a good chunk of these coming-of-age movies are just lost on me. I was a Princess Bride kid. I loved The Neverending Story and The Pagemaster.

Rob: I was just more into fantasy stuff for obvious reasons. Also, baseball was my connection with my dad, not friends or siblings, which is probably why I’m more of a Bull Durham guy than a Sandlot guy. It’s the philosophy of the game that I connect with, not the camaraderie. I don’t know. I just missed this part of growing up, but that’s okay!

With all that being said, The Sandlot is a wonderful movie. The writing is a bit derivative, and it’s directed about as haphazardly as you’d expect from first-timer David Mickey Evans, but there’s just no denying its power. The lead ensemble is adorable (with Patrick Renna the obvious standout as Porter), and Jones provides the same centering gravitas we always expect from him. I like how much he gets to laugh in his one scene.

Adam: James Earl Jones has one of my favorite line deliveries ever in a movie when he is all “I got a lot of good stuff” about his memorabilia collection. 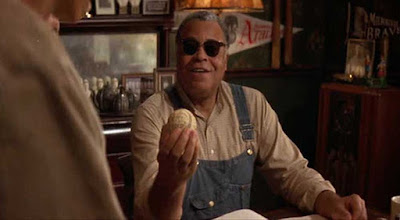 Rob: The one thing I found really interesting on this rewatch is how Smalls’ lack of baseball knowledge informs his character. He doesn’t know positions, mechanics, or who Babe Ruth was. We never even see him listening to a game on the radio. Baseball isn’t aspirational for him; he’s not trying to imitate his heroes. He’s just trying to connect with people — his stepdad, kids his age...literally anyone. I bring this up because you mentioned the movie feels authentically “baseball,” which I agree with to an extent, but it certainly isn’t as baseball-centric as other movies we’ve watched in this series. It’s more a series of memorable vignettes that are loosely connected by a baseball motif. That’s not a knock on the movie’s quality. Just an observation.
You mentioned that The Sandlot was a cornerstone movie for you. What do you connect with most about it?

Adam: You touched on it a bit already, but a few of my childhood summers were basically this movie just 30 years removed from when The Sandlot is set (1962). I spent many days from June to August at a diamond playing baseball with anywhere between 2 and 10 people. We would purposely try to hit in the batting stances of players of the day (Ken Griffey Jr, Gary Sheffield, Julio Franco, and Juan Gonzalez were some of my favorites to try to pay homage) and when it was too hot we went to a movie, the library, or the pool. Days where I couldn’t do one of those four things felt like a crime. An added bonus was I spent these summer days playing baseball with kids I was friends with from little league and this was our opportunity to a) goof off and not have to worry about winning a game and b) finally be on the same team instead of playing against one another. I think there was also a bit of an unspoken competition between my friends and I where we all thought we were the Benny “The Jet” Rodriguez of our group. We would pull jerk moves on each other like stretching a single to an inside the park home run because Travis was playing left and Travis couldn’t catch or throw. It’s just great memories for me and The Sandlot recalls them in such a fun way.

Now the most important questions. Would you want Denis Leary as your stepdad? I asked my dad this last weekend and he said no and my reply was “But he’s in Draft Day.” And how would you rank The Sandlot kids from favorite to least favorite? 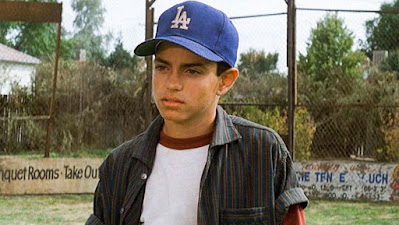 Rob: Denis Leary is about as typical a movie step-dad as they come. Dad was mom’s real love, but she’ll never get him back, so she settles for someone assertive who can at least pay the bills. He would hate me, and that would be fine. As far as rankings, I’d put Porter at the top for his charm, Rodriguez second for his heart, and Squints third for landing Wendy Peffercorn. Everyone else is more or less interchangeable.

Adam: The kid named Timmy is my favorite because he looks like Martin Sheen.

Rob: We’ll be back next week with a Rest of the Furious entry highlighting Jordana Brewster in her first collaboration with both Tyrese and Justin Lin: 2006’s Annapolis. Until next time…