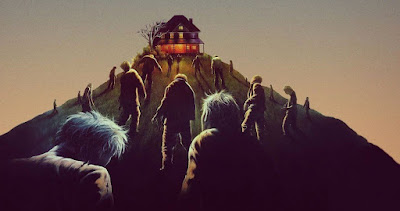 Returning to the Music Box of Horrors 24-hour horror movie marathon last weekend (after a 1-year hiatus when the event wasn’t held due to COVID) was more comforting than I expected. Until I experienced it again, I didn’t know how much I missed the little traditions like meeting up with friends early in line to stake out the best seats, walking around and buying merch from horror vendors in the lobby and living off a diet of mostly concessions snacks for the better part of a day. I’m no longer of the temperament or stamina to stay the full 24-hours, but this year I tried out the JB strategy of staying for a few movies at the beginning on Saturday, leaving, and coming back pre-sunrise on Sunday morning to take in the end of the marathon which was around noon.

Here’s what I saw that was new-to-me:

• Strait-Jacket (1964) – I’m still kind of a newbie with William Castle movies, but I’ve liked all of the ones I’ve seen (including House on Haunted Hill, The Tingler, and Mr. Sardonicus). I’ve been putting off the Joan Crawford-Castle collaborations because all I can think of with her is her portrayal by Faye Dunaway in Mommie Dearest. I gotta say, though, Strait-Jacket made me push aside my reservations pretty quickly because it’s a blast. There’s a lot of awkward humor throughout the movie thanks to some colorful supporting characters and the story is, although hammy, pretty involving. I can’t wait to continue digging into Castle’s work in future Scary Movie Months. 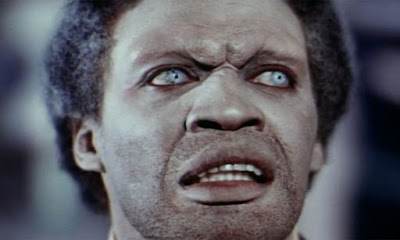 • Dr. Black, Mr. Hyde (1976) – So it turns out I’m a pretty big fan of the directorial career of William Crain. I saw his film Blacula for the first time at the Music Box of Horrors drive-in event last year and loved it. When I saw the lineup announced for this year’s in-theater event, I was excited that they programmed another movie of Crain’s – Dr. Black, Mr. Hyde. Despite no one in the film having the name Dr. Black or Mr. Hyde, the rest of it is so entertaining with interesting characters, great music, ample lounge time (which is one of my favorite tropes of Blaxploitation cinema), and a great early performance by Bernie Casey. I wish there was more Rosalind Cash in this, but that’s my only complaint. It was great that Mr. Crain himself was at the event for a post-film Q&A. He said he’s working on a new movie right now (he’s in his 70s) and I really hope that comes to fruition.

• The Hands of Orlac (1924) – This was the only new-to-me movie I was lukewarm about at the marathon. I’m realizing most of my silent movie watching (outside of film classes) over the years have been horror movies, which makes me appreciate the genre even more. The experience of watching The Hands of Orlac at the marathon was special because it was accompanied by a live score and that’s always a unique moviegoing experience. The film itself though didn’t grab me in the ways other silent horror films like The Unknown or The Cabinet of Dr. Caligari have. The Hands of Orlac was fine but I was distracted for most of the time because it was another example of early horror where the movie is about losing your appendages and having them replaced with those of a deceased madman. I might be imagining this, but was this a go-to subgenre back in the 1920s and 1930s? 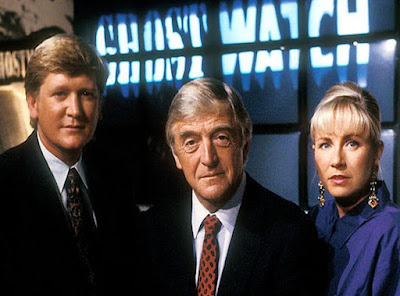 • Ghostwatch (1992) – This might be my favorite new-to-me movie of Scary Movie Month. It’s a shame it’s not more readily available (I think there’s a Region 2 DVD but no Region 1 or streaming options). The reason for Ghostwatch’s scarcity is how controversial it was when the film aired on British television in 1992 under the pretenses of being a Halloween night news broadcast. The spooky haunting being filmed went too far (essentially becoming a found footage movie a la The Blair Witch Project) and audiences flipped out thinking it was real because many of them tuned in after the pre-show disclaimer that everything happening in the film was staged and fictitious. The air of this film upsetting people in real life gives it a palpable eeriness. I definitely recommend this fun and scary curiosity if you can get your hands on a copy.

Here’s what I skipped:

Here’s what I re-watched at home: 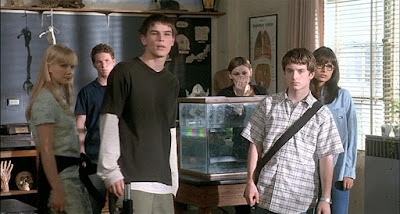 • The Faculty – I would’ve loved to have seen this one with a full crowd during the marathon, but it was playing at 12:30am which is when I was back home sleeping. Instead, I revisited the film ahead of the marathon so that I didn’t feel bad about missing it at the event. I used to think The Faculty was just ok, but this recent re-watch at home made me into a bigger fan of the film. I’ve seen so many Invasion of the Body Snatchers riffs over the years that I appreciate how good an homage The Faculty is by comparison to lesser examples. I love the movie’s pacing and we’re now at the point where late-'90s pop culture is in my sweet spot for nostalgia. No longer do I want Josh Hartnett to get a haircut in The Faculty. Now I just marvel how cool he is in this movie. I also enjoyed Robert Patrick, Shawn Hatosy, and Clea Duvall’s performances more than I had in the past. This was the perfect kind of revisit – a movie you half-remember that can still provide pockets of discovery and enjoyment.

Here’s what I saw the last 10 minutes of:

• Calvaire (2004) – I walked in for the last 15 minutes of this movie at around 6am and felt immediately…yikes! It looked like a punishing, survival-horror experience. I won’t say it’s a good or bad movie because I barely saw any of it, but I previewed enough to know this one’s maybe not for me.

Here’s what I revisited:

• Night of the Living Dead (1990) – This is one of those cases where I let Siskel & Ebert’s review influence my take on the movie. I remember they both disliked the remake of Night of the Living Dead, so I went around my entire childhood thinking it was bad. I started watching it more often as I got older and every time I see it, I think it gets better and better. I’m a fan. It was great to see it in a theater, especially at 6:40am where you’re still groggy and night is transitioning into morning. Also, Tony Todd is so damn good in this. It might be my favorite of his performances, even more than his portrayal of Candyman.

• Phantasm II (1988) – I had only seen Phantasm II once before at a previous 24-hour Massacre marathon (held at the Portage Theater) and kind of dug it. I find it funny how horny the first two Phantasm movies are (kind of like Halloween III: Season of the Witch) where the horror elements are almost this side quest to hooking up with some cool ladies. Reggie Bannister’s just the best. I also really liked seeing a Phantasm movie (in the case of Phantasm II) with a Universal Studios budget behind it because that is a problem that sapped my enjoyment of the final Phantasm movie due to its lacking visual effects. 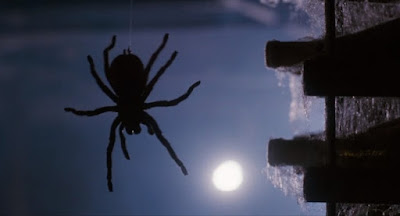 • Arachnophobia (1990) – I have such a history with Arachnophobia. I still get teased by my family 31 years later about how I got so scared seeing this movie in theaters when I was 8 that I asked my Dad to leave, and we had to go see Taking Care of Business instead. This screening of Arachnophobia was special because a) I hadn’t seen it in a very long time and remember loving the movie and b) this was a rite of passage – finally seeing Arachnophobia in its entirety in a movie theater. This was the film that closed out the marathon and it’s a great choice because it culminates in a crowd-pleasing climax of man vs. spider with the hero emerging victorious. I’m so glad I went back for these final three movies. I hope the schedule cooperates next year where I can use the JB strategy again. It’s the optimal way to attend a 24-hour horror marathon in my humble opinion.

The Music Box of Horrors was so satisfying this year that I had a difficult time wanting to watch more horror movies afterwards because it felt like the culmination of a truly satisfying October watching horror movies. I can’t wait to go back next year and enjoy this annual tradition all over again.
Posted by Patrick Bromley at 5:00 AM