New Year. New Double Features!
Double Feature 1:
Adam: #1: Two Weeks Notice (2002)
Patrick: #2: Mayhem (2017)
Patrick: Trailers/Shorts: Office Space, Take This Job and Shove It, Jerry Maguire
Patrick: Theme: Movies About Quitting
Patrick: With millions of people leaving their jobs each month, what better to program a double feature of movies about quitting? Sure, they’re in two totally different genres – one is a romantic comedy and the other more action/horror – but both get at a specific type of frustration wherein you realize you can no longer do what you’ve been doing. Mayhem is the more cathartic of the two, so it makes sense for it to go second, but I really enjoy both of these movies.
Adam: Two Weeks Notice is cathartic as well if the reason you’re quitting is that you’re about to start a relationship with your boss.

Patrick: It’s a very clever double bill! Do you think if her career had gone differently, we could have had Robyn Lively as Dr. Chase Meridian? Also, I think I’ve only seen KKPIII once in my life and only remember a scene in which Ralph Macchio and Robyn Lively are going to fall off a mountain or something? So, I’m due for a revisit. I’m much more of a Thomas Ian Griffith fan ever since seeing Excessive Force. Patrick: There are only a handful of movies written but not directed by Oliver Stone, and I’d argue they’re all good. Don’t get me wrong, I like him as a director too (up to a point, at least), but that resume makes me wish he had written a few more movies for others to direct.

Adam: This is the double feature I would watch first because I haven’t seen either movie yet, but have always wanted to. Even though he’s so far-gone, I’d love to see a new Oliver Stone movie he’s written and/or directed. He can’t go out on Snowden!

Adam: Trailers/Shorts: The Road to Wellville, Silent Fall, Vanya on 42nd Street, the Siskel & Ebert episode where all these movies are reviewed

Adam: Part of my early 2022 comfort watching is revisiting old Siskel & Ebert episodes and this is one of the ones I have coming up next. I’ve never seen Stargate so I’m happy now to have an excuse. I wanted to treat our audience by choosing (what I assume) is the best movie being reviewed on that episode - The Last Seduction - as the second feature. I remember the Silent Fall trailer being funny too in a Color of Night kind of way. Plus, we get to watch a full-length episode of Siskel & Ebert with old commercials!

Patrick: Love this program. They have nothing in common, but Stargate and The Last Seduction would play really well together, probably because they’re both good movies. I don’t remember much about Silent Fall, but I see it’s written by Akiva Goldsman so you know it’s got to be good. 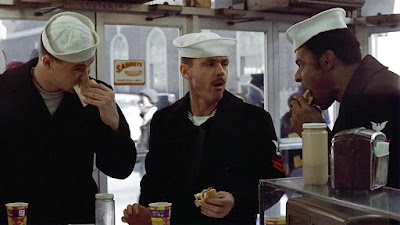 Patrick: You and I both have a high tolerance for trash, so we often program some less respected titles into these double features because it’s what we enjoy watching. This double is not that. These are some fucking MOVIES. What an amazing double this would be. So much swearing.

Adam: This is an incredible lineup with two movies I absolutely love. Plus, the theme is inspired. Between this and last month’s F Cinemascore double feature, you’re on fire.

Adam: Trailers/Shorts: The Shrimp on the Barbie, Mr. Nanny, A Kid in King Arthur’s Court

Adam: I was thinking about a department store romance double feature but couldn’t come up with enough movies for the trailers. Instead, let’s honor the late Michael Gottlieb with a celebration of his filmography. Do you have a preference between Mannequin and Mannequin Two? I saw both at such a young age that I would need to rewatch them to decide which I liked better.

Patrick: I legit like Mannequin even though it’s impossibly stupid. Mannequin Two makes Mannequin look like Avatar. I know Brian Saur is a big fan, but I can’t get there myself despite my affection for William Ragsdale and that-period Kristy Swanson. 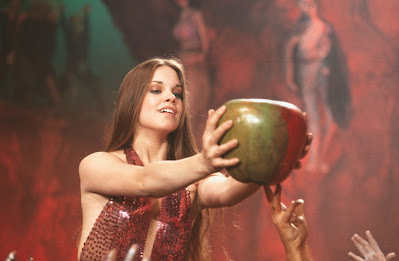 Patrick: I had to Google “what goes with Brie?” just to make the stupid pun work. It’s way too sweaty.

Adam: Puns can be difficult sometimes. Shiri Appleby! I liked her in Swimfan. Also, I’ve never seen The Apple and wow does it look crazy.

Adam: Wet Hot American Summer rules. I love how absurd the humor gets. I think about the “You taste like a burger. I don’t like you anymore” moment sometimes and it always makes me laugh. Good Burger would pair well because a) burgers, b) it’s phenomenal and c) it operates on the same wavelength as Wet Hot American Summer where it’s often clever in its silliness. Where do you want to order burgers from before we watch this one?

Patrick: This is an amazing program. I love the trailer lineup especially. I say we order burgers from a couple different places and have a burger bar. 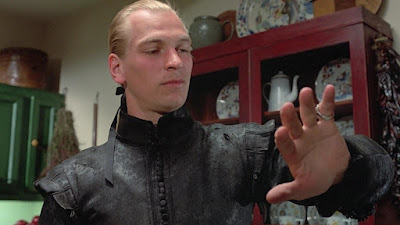 Patrick: I wanted to choose another interactive movie or more stuff directed by Bob Gale, but I came up short on both and decided to double down on Billy Warlock, a charisma vacuum best known for a long stint on Baywatch. At least we get to watch the first Warlock, which is really great.

Adam: The first Warlock is truly great. I’ve been fascinated by Mr. Payback: An Interactive Movie since I saw Siskel & Ebert’s review of it on their show. They thought it was an affront to cinema. I’m maybe most excited to watch my first episode ever of 21 Jump Street.

Adam: Trailers/Shorts: Romeo + Juliet, 10 Things I Hate About You, Get Over It, O

Adam: Theme: Teen Films Based on Works by William Shakespeare

Adam: Just One of the Guys was my first time seeing movie boobs. I was like 4 or 5 years old and didn’t understand what was happening. I thought she had something wrong with her. I resisted making this a boobs double feature and went high-brow…or as much as Amanda Bynes can be considered highbrow. I miss Amanda Bynes. I thought she was going to be a big deal in the comedy world for a lot longer than she was. Did you know that her early 2000s show What I Like About You is now on HBO Max? I might have to rewatch it. That was a secret shame of mine after I graduated college. I tried to be as cool as Nick Zano but it didn’t work out.

Patrick: I’ve never seen an episode of What I Like About You and have very little exposure to Amanda Bynes outside of She’s the Man, which Erika and I saw in theaters. I remember her using a weird voice but having good comic chops. Conversely, I’ve seen Just One of the Guys about 100 times because it was on HBO so much when I was a kid. I never get sick of it. This double feature rules.
Posted by Patrick Bromley at 12:00 PM