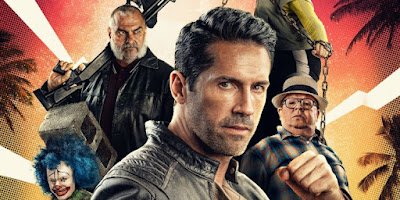 Mike Fallon (Scott Adkins), the Accident Man, returns in Accident Man: Hitman’s Holiday! Based on the UK comic from Pat Mills and Tony Skinner, Fallon is a professional hitman, given his namesake for his ability to make all of his kills look like freak accidents. After killing most of his team in Accident Man, Fallon finds himself banished from London and lands in Malta. To his surprise, he finds there’s more work than he could have imagined. While in Malta he encounters an old member of his team, Finicky Fred (Perry Benson, returning from the first film), and they partner up. Unfortunately, Fallon’s reputation gets a little too big and when someone uses his methods to attempt to assassinate the spoiled son of a crime lord, Fallon finds himself forced to protect the son (played by a very game George Fouracres) against an endless parade of over-the-top assassins, or Fred will meet his untimely demise. What results is an ever-escalating series of fights against some of the most colorful characters this side of Mortal Kombat, as Fallon must fight his way to safe haven with the obnoxious kid.

In the interest of full disclosure, I run a podcast called Action For Everyone on which Scott Adkins is a frequent guest. There’s no way around it; we are friends. That being said, if you listen to past episodes you will find that I have zero hesitation in telling Adkins when one of his movies doesn’t work. Thankfully Hitman’s Holiday doesn’t put me in such a predicament, since the movie is terrific through and through. 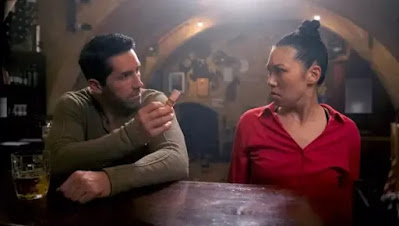 Hitman’s Holiday might be The Ultimate Scott Adkins Experience. It’s not necessarily his best -- that honor still belongs to Universal Soldier: Day of Reckoning -- but it is the film that brings together all of Adkins’ skills into one complete package. By producing and co-writing the film, Adkins exerts more control over the film than he’s typically afforded. The end result is a film that improves on the first in every possible way. The humor is better, the fights more blistering, and Adkins is truly in his element.

First-time directors The Kirby Brothers (George and Harry Kirby) make terrific use of the gorgeous Malta locations, which also provide a nice change of setting from the bland warehouse fights usually seen in low-budget action films. The Kirbys, along with cinematographer Richard C. Bell, also bring a sense of style to the proceedings, creating a unique look that is far too often missing in these types of low-budget action films. It also helps that the Brothers are former stunt people themselves, so the action is shot in clear, long takes, and are edited to provide maximum impact.

You can’t discuss a Scott Adkins film without, of course, discussing the action. Adkins, choreographing many of the fights himself along with Tim Man and Andy Long, brings a level of intensity to the fight scenes that we haven’t really seen from him since the heyday of Ninja: Shadow of a Tear. Man is Adkins longtime choreography partner and Long is a former member of the Jackie Chan Stunt Team. The team brings a serious Hong Kong style and reckless abandon, to the fight scenes. Of particular joy is a lengthy brawl between Adkins and British martial artist Beau Fowler, with Fowler playing a psychotic clown who can’t feel pain, which technically also makes the movie appropriate for Scary Movie Month. For as great as Adkins and the other performers are, the real highlight might actually be relative newcomer Sarah Chang playing Siu-Ling, a woman Fallon hires to continually try to beat him up, a la Kato from The Pink Panther. Chang has been working her way up through indie action films, but this is a truly star-making role. Going toe to toe with Adkins, she matches him kick for kick and joke for joke. In particular, the film makes great use of Chang’s incredible flexibility during her fight scenes, with choreography reminiscent of the best of Michelle Yeoh’s fights. 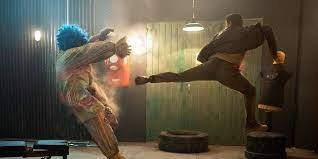 No movie is perfect, and there are some things in Hitman’s Holiday that don’t work as well as others. Not all of the humor lands, but that’s to be expected when the jokes come as frequently as they do in this film. The ratio of hits to misses still remains more positive than the first film. The Kirby Brothers appear more comfortable blending the humor and action than first Accident Man director Jesse V. Johnson ever did. And like any low budget action film, there are the things that just come with the territory, including some dodgy CGI and hits that don’t always land as they should. But none of these criticisms detract from what is one of the most joyous action films of the year.

There is one cloud that hangs over the film, through no fault of the filmmakers, but this wouldn’t be a complete review without addressing it. One of the assassins is played by British martial artist Zara Phythian, who was recently convicted of sexual assault of a minor in England. Pythian is only in one action scene, but it is a lengthy one that is also inextricably tied into the narrative of the film. Cutting the scene would not have been possible, and the unfortunate realities of low budget filmmaking meant there was no money to reshoot the scene. The filmmakers were left with two choices: shelve the entire project, or remove her credits and go forward. I believe going forward was the correct choice given the obvious work and love everybody else put into the film, but it is also perfectly understandable why someone would not want to watch the film and that is completely valid.

That ugliness aside, anyone who digs into Accident Man: Hitman’s Holiday will find a sequel that improves upon its predecessor with better action, better humor, and one of the greatest action stars of all time looking and acting completely reinvigorated. The film might not make any new Scott Adkins converts, but for fans of the star it is an absolute feast.
Posted by Patrick Bromley at 12:00 PM