Happy Holidays! Treat yourself and unwind with one of these double features programmed by Patrick and Adam.

Patrick: This is so obvious I’m almost ashamed to put it on here, but I thought the second feature plus the cool trailers would make for a double feature that would actually be a ton of fun to watch. I’m sorry for being so basic but I’m not sorry for getting a Joe Lynch movie in here.

Adam: Yeah, I’m trying to balance “what will be fun to watch as a double feature” more now over just being a clever theme. Also, it’s the holidays so you deserve to put your guy Joe Lynch in there as a present to yourself.

Adam: I thought it would be interesting to program a night of Jerry Bruckheimer productions before he became a brand and firmly established his aesthetic. I had no idea he produced Thief, which is great because I’ll take any excuse to watch Thief. I’ve never seen Defiance, but it seemed of similar gritty pedigree. A double feature of Michael Mann and John Flynn seems like a solid evening at the movies.

Patrick: Defiance is a Brian Saur favorite and is pretty great. I like these early Bruckheimer movies a lot, but it’s pretty interesting that his signature “style” wouldn’t really be developed until he teamed up with cocaine vacuum Don Simpson. This early period is great (these movies would be really fun to watch together), but I’m partial to the slick trash he made later in his career. Do you have a preference?
Adam: Simpson/Bruckheimer is my favorite era (era) of Jerry Bruckheimer’s career (which includes Beverly Hills Cop, Top Gun, Bad Boys, Crimson Tide, The Rock). 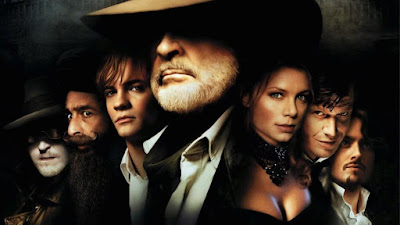 Patrick: I was trying to program a double feature of movies that drove their creative team away from the business, because I know League made both Sean Connery and director Stephen Norrington quit. It didn’t quite work out that way, but I guess I came close. I would not want to watch this double feature I don’t think.

Adam: I would watch this double feature in a heartbeat. I’m curious to revisit The League of Extraordinary Gentlemen next year when I do my 2003 rewatches. I know it won’t be good, but I remember almost nothing about that movie after seeing it on opening night. Plus, I’ve never seen Welcome to Mooseport so this is a good excuse to finally do so.

Adam: First off, the Razzies suck so this is in no way celebrating them. I’m doing this to thumb my nose at their reactionary taste. I’ve never seen Harlem Nights but always meant to (I probably should this month since it’s leaving HBO Max at the end of December) and I’m one of the few fans of Star Trek V, so this seems like a good double feature for me at least. I also like the pairing because it’s two actors directing to little acclaim. And Eddie Murphy’s a Star Trek fan from what I’ve heard in the past. Do you think we can get William Shatner and Eddie Murphy to attend? How does a voting body pick Road House as one of the worst movies of 1989, let alone any year? They really didn’t know how bad it was going to get in the 2020s.

Patrick: I haven’t seen Speed Zone in a lot of years and I’m not a big KKIII guy, but to call it one of the worst movies of 1989 is such small thinking. Razzies gotta Razzie. To show just how little they know, I actually really like this double. They for sure singled out these directors because they were the stars, too. 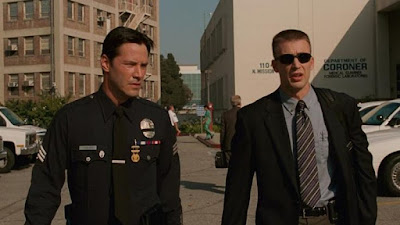 Patrick: Kurt Wimmer is someone whose career I don’t totally get. I’m not crazy about his movies as a director and I think we’ve paired up his two best movies as a writer (it helps that he’s not the sole credited screenwriter on either). I would have much rather turned this into a double feature of Bad Guy Corbett, but it turns out he didn’t go Heel too often.

Adam: Yeah, the only other bad guy Corbett I can think of is Tombstone where he’s like “Hey, where’s Curly Bill?” and gets shot immediately. I don’t have much of an opinion of Kurt Wimmer, but I can’t say he’s made much that I’ve enjoyed (The Recruit is fun in a trashy thriller way). Then again, so is Street Kings! I love how over the top Forest Whitaker goes in that movie. I like the pairing with The Thomas Crown Affair. This double feature will be 2 hours of sleaze followed by 2 hours of class.

Adam: Not getting into R-rated movies in junior high was one thing, but not getting into R-rated movies in high school (when girls started to become involved) was another. This double feature is pure revenge on all the dorks in 1998 suburban Illinois movie theaters who abused their power and didn’t let me see these movies. I think “closure” is the right word. Also, this double feature would be so much fun! Fun fact: I did end up seeing Wild Things, Saving Private Ryan, Urban Legend and Psycho in theaters in 1998 but it took a second attempt at different cinemas. Dead Man on Campus is my white whale.

Patrick: I saw DMoC twice in theaters opening weekend (once with an appendicitis!), so let’s count one of those as yours. We’ll be showing two of these movies as part of Smash Cut, so our dream of running a movie theater grows closer every day!
Posted by Patrick Bromley at 12:00 PM