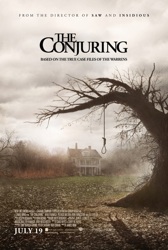 I had a great time watching The Conjuring, and I’d recommend it to anyone, even if they don’t usually like horror movies. It’s such a fun movie-going experience.

The Conjuring is not perfect, but my complaints are minor. It’s what I like to call "pinball horror," which means it’s a big, flashy thing that promises nothing but quick, ephemeral enjoyment. It’s spooky, well-acted and a rare movie that actually seems to like its audience. I can see myself going back to this one every couple of years for Scary Movie Month.

In full disclosure, I’ve been rooting for this movie for months. With Insidious, I did a complete Tatum on director James Wan – i.e. I used to not like him at all and now I only feel like defending him. Wan is one of horror’s good guys, meaning he’s not only technically very skilled but seems to be coming to the genre from a place of reverence and sincerity. The Conjuring had a great trailer, a cast of actors I’ve liked in the past and came out with very strong buzz in the past few months. I was primed to like it. 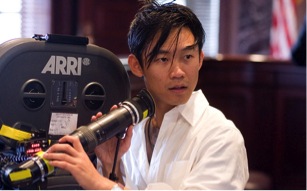 The plot in brief: In 1971, a couple, Carolyn and Roger Perron (played by Lily Taylor and Ron Livingston), move into a dilapidated, old farmhouse in Harrisville, Rhode Island with their five daughters. Over the next couple of days, various paranormal activities occur, steadily increasing in intensity and frequency. Carolyn seeks the help of Ed and Lorraine Warren (Patrick Wilson and Vera Farmiga [very pretty/doesn’t look like a person]), noted paranormal investigators, to investigate.

I had a few small issues with The Conjuring. The main one is that it’s spooky as opposed to being really haunting. It sort of evaporated from my head right after it was over and didn’t keep me up at night. When I said I’d recommend the movie to people who don’t like horror movies, what I mean is that it’s sort of "safe" horror, like The Others or The Ring. There’s also not much originality, plot or structure-wise. It owes a lot to Poltergeist and The Exorcist. The Conjuring has some depth, but most of that is brought by the acting. This is a movie that is exactly what it seems on the surface. I also didn’t feel like the movie went off the rails enough, despite the level of mayhem on hand. It’s the story of a director willing to go only so far, which is a surprise if you’ve ever seen James Wan’s 2007 movie Death Sentence, which goes way too far. 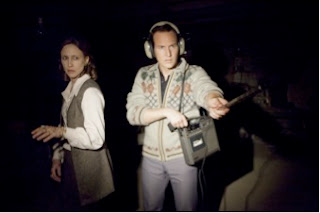 But Wan’s willingness to go only so far is what helps keep the movie so much fun. In a way, this was a big relief for me. I’ve been wondering a lot this year why it’s so hard for me to have fun at the movies; even movies I’ve liked have tended to be more dramatic and heavy in nature. Am I able to have fun anymore? I hope so. I feel like this year, the fun has been in quotation marks and really just means things that don’t mean anything to me like origin story, world building or R.I.P.D. Barf. Honest to goodness fun is watching a movie where it seems like the characters are actually family members or friends (This is the End, Fast and Furious 6, Hansel and Gretel: Witch Hunters).  Deep character relationships like that help do a lot of the heavy lifting in a movie and add shades that might not have been there. It’s a chemistry thing. Wan’s last two movies, Insidious and The Conjuring, LOVE the family unit. They don’t want to machete the son in the neck and then later murder the mother and put the only other son in a coma (fuck you, Death Sentence). It’s funny that one of Wan’s next movies is Fast and Furious 7. At first, I thought he was an odd choice but now it makes total sense. Fast and Furious has somehow become the most family values-oriented action series in recent memory. It’s like Full House with cars. Fast 8 should take place at the Olive Garden, just them having dinner. Fast 9 is Fastelvania, where they try to steal Dracula’s brides (one of them played by Gal Gadot) and drag race on cobblestone Transylvanian roads. Fast 10 has already been established by Doug and Patrick to take place in outer space (maybe a Sung Kang cameo as Jor-El). We have a lot to look forward to. All roads have led to this. You guys, Lucas Black might come back! You know, drift king, DK.* I want a beer, as long as it’s a Corona.

But back to The Conjuring. The characterization in this movie is awesome. I love the Warrens. I could watch 20 movies with those two characters just taking on new cases of the occult and paranormal -- fingers crossed they become the Indiana Jones of horror for the next few years. Patrick Wilson and Vera Farmiga are so good, as they always are, at playing them because they are so matter-of-fact and compassionate. They make nonsense dialogue go down smoothly because their characters truly believe what they’re saying. It’s cool that Wan went with this approach. He is fascinated by the characters and doesn’t present them as kooks or con artists in any way. The Perron family is also well-acted, with a nice part for Lily Taylor that might be her apologizing for her work in The Haunting. It’s great to see her in a studio movie again for more than five minutes. Minor characters like the cop or the Warren’s assistant, Drew, are given little bits of business to make them seem like rounded characters. I especially liked all the stuff with the UV light, which Wan uses to show how out of depth the cop is and as a prop for Drew to try and pick up the oldest Perron daughter. In the midst of a haunting, young men are still thinking about getting laid. That’s amusing. I’d also argue that even the ghosts have personalities. None are random specters there simply because they look scary.

I very much admired The Conjuring from a craft perspective. There are tons of neat touches, like the room full of artifacts in the Warren’s home (including a creepy ass doll), a music box that plays a memorable score and even a bad ass title card. I’m not one to usually geek out at a title card but the way this one is done is impressive for some reason. Maybe it’s the font? The score is good and there are really top-notch practical effects as well as makeup. The Conjuring has a hand-made quality to it, which enhances the light CGI used. 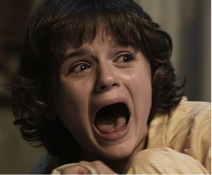 The Conjuring is Joey King’s best movie and one of my favorites of the year so far. I can’t wait for Insidious: Chapter 2. I guess you could say I love Wan Direction.

*P.S. Why didn’t they get DK to pilot one of the Jaeger’s in Pacific Rim? If you wanted to have someone that’s great in the drift, um, shouldn’t you have Drift King?
Posted by Patrick Bromley at 11:52 AM