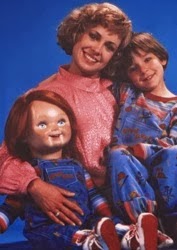 Alex Vincent, let's be friends 'til the end.

There's a long tradition of kids as major characters in horror movies, because either a) kids in jeopardy raises the stakes of any story or b) killer kids are freaky, because kids aren't supposed to kill people (and those who do deserve a TIME OUT). So there is the subgenre of "killer kid" movies, from Village of the Damned and The Bad Seed to Pet Sematary and Who Can Kill a Child. Then there are the kids who are terrorized by the monsters -- Danny in The Shining, or Newt in Aliens, or Haley Joel Osment in The Sixth Sense, or Bailee Madison from 2010's Don't Be Afraid of the Dark. Using a child in either capacity can be really effective, but only if the filmmaker knows what he or she is doing. If not, you end up with Bloody Birthday.

Having watched Child's Play twice in the last month, I'm more impressed with young Alex Vincent's performance as Andy than ever before. I know that just a week or so ago I just praised Danielle Harris' work in Halloween 4 as being one of the best child performances in a horror movie, but Alex Vincent's is my favorite. He's the best. 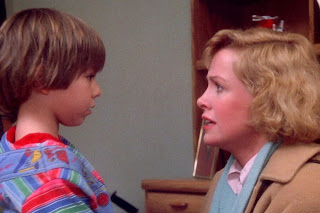 Just six years old when filming Child's Play, Vincent creates our emotional connection to the movie in his very first scene, in which he prepares breakfast in bed for his mom (Catherine Hicks) on his birthday. Disregard the fact that a little boy making his mom breakfast on his own birthday is the sweetest thing ever. Disregard the number of completely adorable touches in the scene, like the enormous hunk of butter he attempts to spread on some burnt-black toast, or the half cup of sugar he dumps onto a bowl of already sugary cereal.

Disregard them because there's a ton of important information that's conveyed in this scene, too. Andy is seen wearing a full Good Guys outfit (striped shirt, overalls, standard issue Good Guy sneakers). He's watching the Good Guys cartoon and pouring Good Guys cereal. He loves the Good Guys, not wanting to break his eye contact with the TV even as he prepares breakfast. My favorite moment is when he sees the commercial for a Good Guys doll and looks over longingly at the wrapped gift waiting for him in his living room. Through purely visual storytelling and Vincent's performance, Child's Play establishes that what Andy wants more than anything in the world is a Good Guy doll -- not just because he's a six-year old who wants the popular new toy, but because he's lonely and wants a best friend.

I could watch that clip 20 times in a row. That little smile he gives the gift he thinks is a Good Guy? The best. Also, that's director Tom Holland doing the voiceover on the TV. TRIVIA!

That's the sequence that sets everything up. Andy and his mom are clearly on their own, which establishes the "us against the world" dynamic that's put to the test through the events of the movie. Andy has had to learn to be independent, adding credibility to the later sequences in which he's navigating the city of Chicago on his own, helping his new friend Chucky get around and (unbeknownst to Andy) exact his revenge. Most importantly, though, it establishes that Andy LOVES THE GOOD GUYS. He loves Chucky before he even gets him as a gift. He desperately wants a best friend, which Chucky is able to exploit in his favor.

It also makes the movie a lot scarier. Being hunted or attacked by a random stranger is scary, but having something you love turn on you is even scarier. 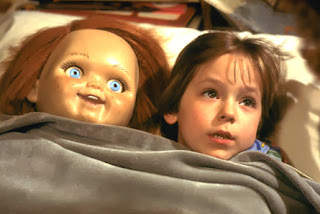 My other favorite moment of Vincent's performance -- and I'm being loose with the word "favorite" here, because it's actually heartbreaking -- is when he's been institutionalized (after no one believes that his doll is actually alive and talking to him) and is begging the hospital staff to listen to his warning that Chucky wants to kill him. He is ignored and he is terrified, and he begins to cry. It is the best kid crying scene I've ever seen, and it is devastating.

Perhaps my connection to little Andy Barclay has a lot to do with my son being close to his age. Watching him sob alone in his tiny hospital room feels like seeing my own kid cry -- but not the kind of crying when he doesn't get his way or stubs his toe. It's the kind of crying informed by genuine sadness. There is a hopelessness to the way Alex Vincent plays that scene that's impossible to reproduce.What makes his performance great is that it is totally, effortlessly authentic. He is not manufacturing motivation, nor calculating his delivery. He is reacting purely in the moment. When they are best friends, he interacts with Chucky like it's an actual toy that he loves (the way he excitedly talks to the doll way too loudly when they first interact is another great moment in the movie). When Chucky goes bad, Vincent's fear -- and even heartbreak -- is totally real.

Of course, there's a lot of debate as to how much a child can be credited with giving a good performance. This came up a lot last year when Quvenzhane Wallis was the youngest person ever nominated for Best Actress for her turn in Beasts of the Southern Wild. Was she consciously making acting "choices?" Or was she just a five-year old convincingly being five years old on camera? Perhaps the same could be said of Alex Vincent in Child's Play. He's less inhabiting the essence of a little kid so much as he is an actual little kid. Does that take anything away from his performance? Is it any less moving when he sobs in his hospital room? I would argue that it isn't. 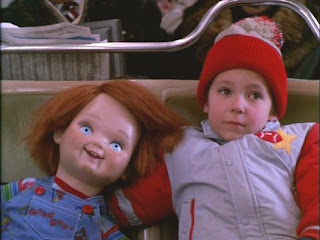 How do we define a great performance? Is it in the series of conscious choices an actor makes -- the intent? Or is it just what ends up on screen? Do we judge it by the effect it has on us or by the skill that went into creating that effect? When it comes to Child's Play, I'm a results man. No, six-year old Alex Vincent does not achieve the brilliance or iconography of Anthony Perkins in Psycho or Piper Laurie in Carrie. But his performance still has an immediacy that's undeniable. It's especially effective in a horror movie, a genre that lives or dies by how invested we can get in the characters and, more importantly, how much we believe in their situation. I believe Andy Barclay, even when no one else does.

More Great Horror Performances:
JB on Anthony Perkins in Psycho
Heath Holland on Piper Laurie in Carrie
Adam Riske on Matthew Lillard in Scream
Posted by Patrick Bromley at 11:48 AM