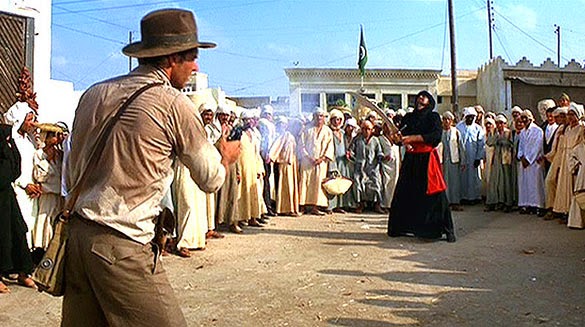 My most click/flick bait title to date! 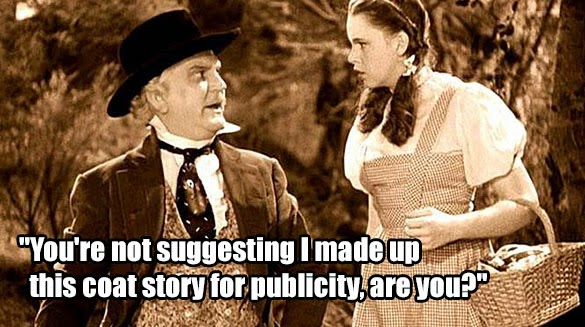 In The Wizard of Oz (1939), a shabby coat was worn by Frank Morgan in his portrayal as Professor Marvel during the Kansas sequences. This tattered jacket, which was once quite elegant, was purchased from a local thrift shop by a costume assistant. When Morgan examined the coat, he found the name "L. Frank Baum," the original author of The Wonderful Wizard of Oz children's book, stitched into a pocket. Baum's widow and the Chicago tailor who made the coat confirmed its authenticity. Although many, including Snopes, still have their doubts.

2. The Blues Brothers had a cocaine budget 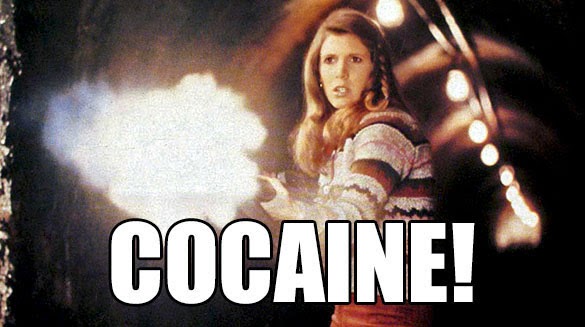 That's right -- money specifically set aside for cocaine. I wonder what that line item was disguised as. "Character enhancements"? "Craft services, ET CETERA"? "No Coke! Pepsi!"? Related side note, while on the set of The Blues Brothers (1980), John Belushi actually told Carrie Fisher that she was doing too much cocaine. When JOHN BELUSHI confronts you about drug use, that's when you know you have a problem. 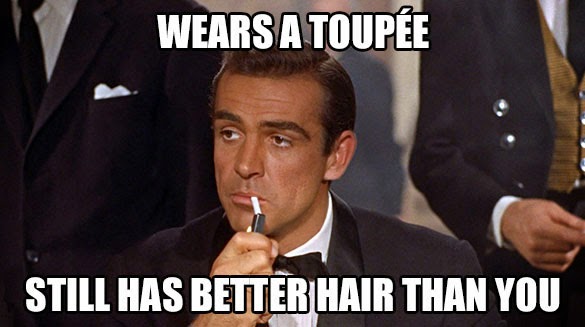 Sean Connery wore a toupée in most* of his James Bond movies (*excluding Dr. No, according to some sources). Connery began losing his hair when he was in his late teens/early 20s. When he started acting, he would wear custom-made wigs. Connery used various hairpieces throughout his tenure as 007. Then again, Connery himself asserts that Alex Trebek's mother pulled his hair out just last night.

Chris Pratt (Peter Quill) made "pew pew" sounds with his mouth when he fired his laser gun, thus ruining an expensive action sequence. Pratt explained, "I've never pointed a plastic gun at something and not gone [gun sound effect]." Related side note: Ewan McGregor (Obi-Wan Kenobi) also made lightsaber sounds while filming Star Wars: Episode I - The Phantom Menace (1999). He claimed he couldn't stop because that's the way he did it when he was a kid.

They changed the name once producers realized that, yeah, lions don't live in jungles. Related side note: the finished version of the song, "Can You Feel the Love Tonight," was almost cut from the film. Composer Elton John had to convince Disney to keep the song in the movie. Good thing, too, as it won both the 1994 Academy Award and Golden Globe Award for "Best Original Song." It also earned Sir Elton a Grammy for "Best Male Pop Vocal Performance." And now you've got that song in your head. YOU'RE WELCOME.

6. Jeff Bridges smiles at pubes in The Big Lebowski

During the Busby Berkeley-inspired dream sequence in The Big Leboswki (1998), the Dude floats beneath a line of women dressed in bowling alley regalia. The ladies straddle Lebowski as he stares upwards at their respective crotches. Bridges later recalled, "My God, that woman has huge tufts of hair coming out of her leotard. I mean, the pubes are just insane! And I got to the next one and they’re even more glorious." He later discovered that they were all wearing pubic hair wigs (or "merkins"). It's unsure if that's the rug that tied the room together.

7. No maggots were harmed in The Shawshank Redemption (1994)

A character named Brooks (James Whitmore) feeds a maggot to his pet crow. The American Humane Association (AHA) (or, according to director Frank Darabont, the American Society for the Prevention of Cruelty to Animals [ASPCA]), which monitored the filming of the movie, objected to the use of a live maggot (on the grounds that it was cruel to the maggot), and demanded that they use a maggot that had died from "natural causes." A dead wax worm was found, and the scene was filmed. If the filmmakers hadn't complied with this request, they wouldn't have been given the "No Animals Were Harmed" disclaimer at the end of the movie. THIS IS A REAL THING THAT HAPPENED. 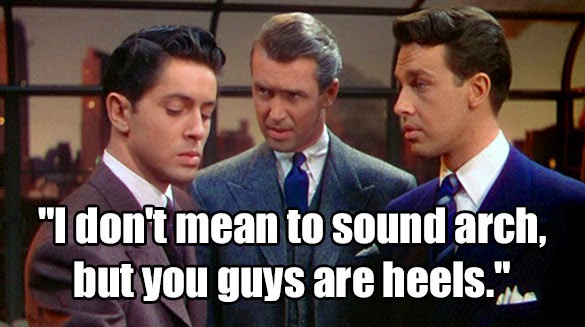 Alfred Hitchcock's Rope (1948) is composed of just 10 very long takes, smoothly assembled to make it look like one seamless scene (it's always reminded me of watching a filmed play). At the time, a camera magazine could only hold about 10 minutes worth of film, and all of the conventional cuts were made by having the camera pass by (or zoom in on) a dark object, blacking out the lens. Deep into a good take (which ended up making the finished product), the camera dolly, which is extremely heavy and runs on a track, ran over a crewmember's foot, thus breaking it. Rather than let the crewmember's scream ruin the scene, another stagehand covered his mouth and dragged him off set. 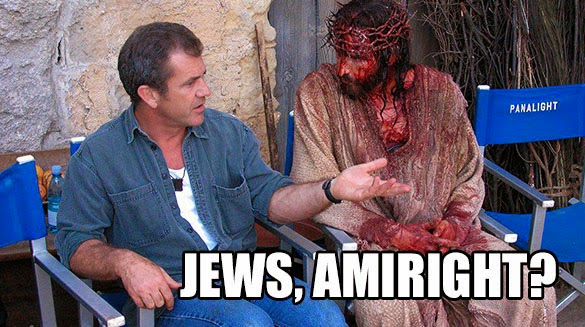 During the filming of The Passion of the Christ (2004), Jim Caviezel (Jesus!) was struck by lightning while he was festooned on the cross. Right beforehand, assistant director Jan Michelini was also struck by lightning. Twice. C'mon Mel! Get your OSHA safeguards in order!

10. Ghostbusters was originally set in the future 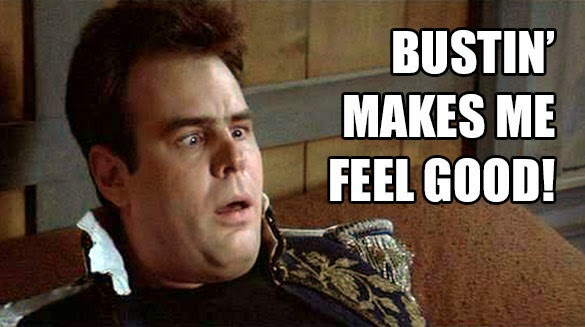 In Dan Aykroyd's first draft of Ghostbusters (1984) (originally titled Ghost Smashers), the story takes place in the future. You see, in that scenario, the "busting" of "ghosts" was a completely normal, worldwide profession, like paramedics and firefighters. It was director Ivan Reitman's decision to bring in Harold Ramis to rewrite the script, which instead concentrated on one group of "Ghost Busters" set in modern times working out of a fire station in New York City. Unfortunately, in the future, print really is dead.

11. Crispin Glover hates the ending of Back to the Future 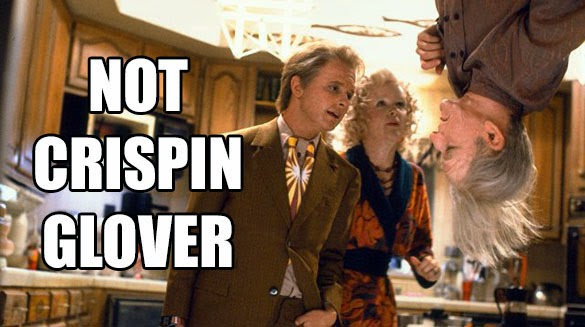 Minor spoilers ahead (although if you haven't seen Back to the Future (1985) yet, you are dead to me) ... at the end of Back to the Future, the McFly family is wealthy, in a very Reagan's America, 1980's vision of success and happiness. Only thing is, Crispin Glover hates it. Glover plays George McFly, father of Michael J. Fox's teenage hero, Marty McFly, and he disagreed with the morality of the consumeristic message of the movie. After finishing the movie, he opted out of the sequels. Director Robert Zemeckis and cowriter Bob Gale decided to hire Jeffrey Weissman as a Crispin Glover doppelganger (in addition to using footage of Glover from the first movie to make it look like he was also in the sequel). But Weissman wasn't just a lookalike in glasses -- he actually wore prosthetics of Crispin Glover's face. After seeing the sequel, Glover sued, and now there are stricter regulations about filmmakers using likenesses. The Screen Actors Guild (SAG) also changed its rules to prohibit its members from unauthorized mimicking of other SAG members. 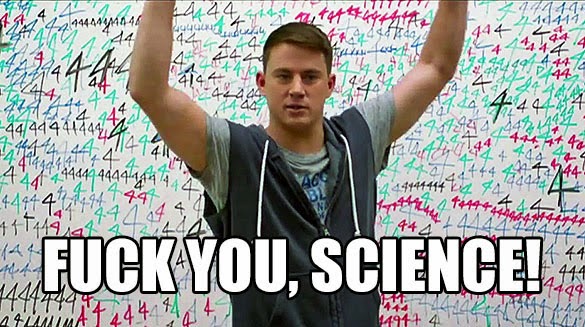 Compared to most sci-fi movies that feature truly awful science, Interstellar (2014) is light years (GET IT?) better than the rest. I've gone on record as being a big fan, naming it one of my favorite movies of 2014. One of Interstellar's producers is Kip Thorne, a Caltech physicist who is one of the leading experts on general relativity and black holes. His team of scientists worked with the film's effects crew to make sure that every space shot followed the laws of physics. The movie's science is so good, that, according to Thorne, their work will soon be published in at least two science journals.

It's probably the most famous scene in Wayne's World (1992), but Dana Carvey (Garth Algar) didn't originally know the lyrics to Queen's 1975 song "Bohemian Rhapsody." He just mouthed along with the music (total Garth move). He later learned the words, but was reportedly unhappy with the final version of that scene, as he's obviously not singing the right words (the most obvious example of this is around the 2:50 mark in the above video). 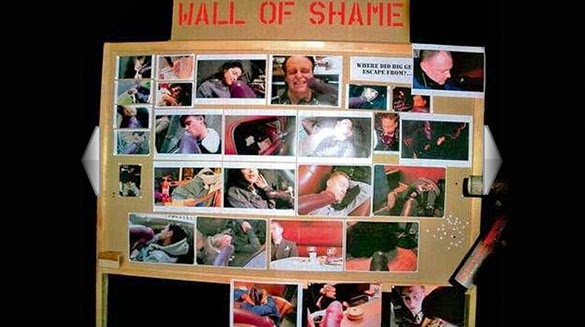 Email ThisBlogThis!Share to TwitterShare to FacebookShare to Pinterest
Labels: back to the future, flick bait, ghostbusters, guardians of the galaxy, interstellar, quentin tarantino, the big lebowski, the blues brothers, the shawshank redemption, wizard of oz