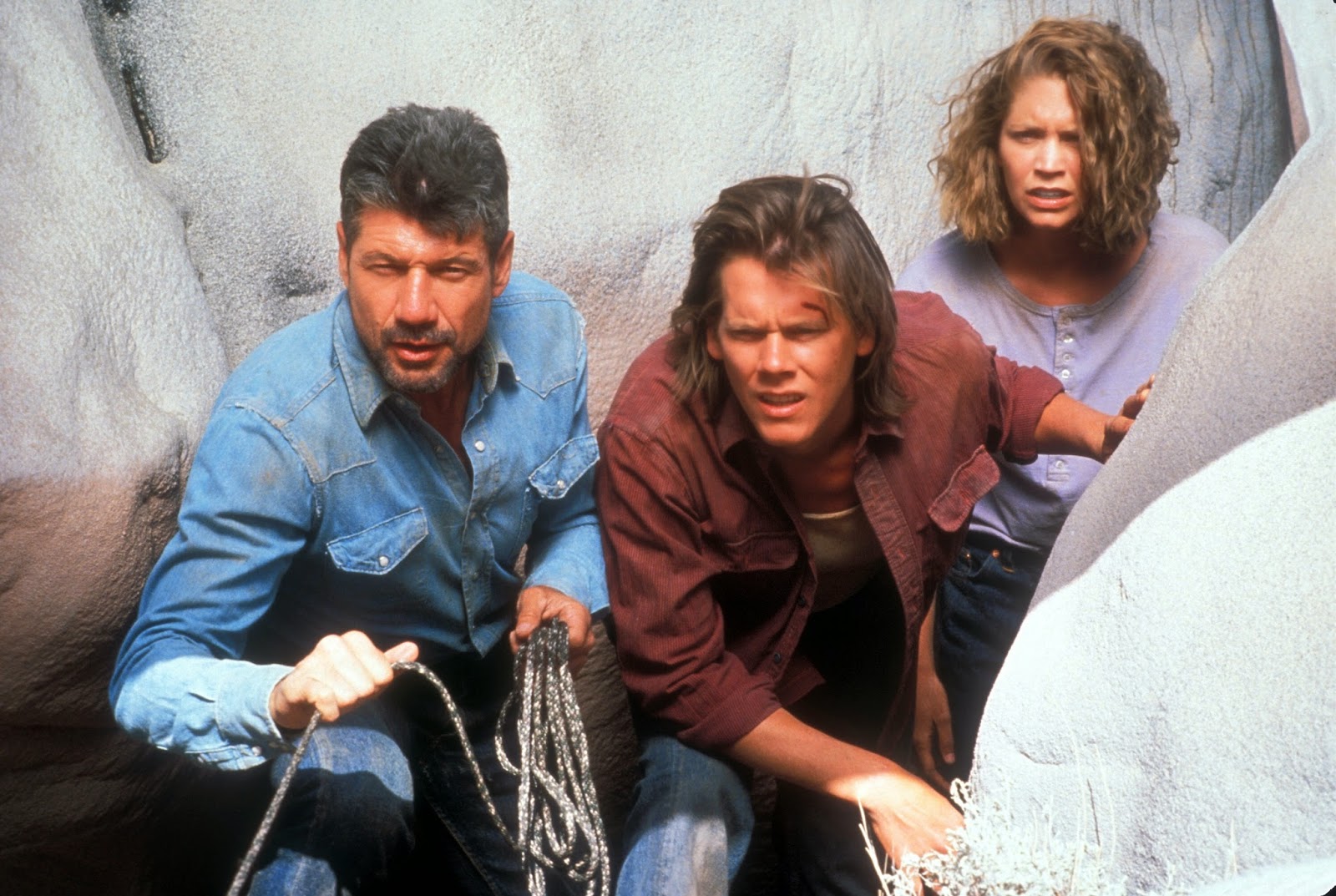 It's morning to midnight to morning monster madness!

Today's marathon theme (the next in a series of hypothetical 24-hour marathons I've been programming all month long here at F This Movie!) was suggested by both Rik Schlimbach and F This Movie!'s own Adam Riske, who added the caveat that the movies could only feature practical effects -- no CGI. So those are the rules. Thanks, guys! Hope you like what I've come up with. One of the very first creature features ever made is this silent adaptation of Sir Arthur Conan Doyle's 1912 book of the same name. A group of explorers and reporters go on a rescue mission to an island inhabited by dinosaurs, created through stop motion effects courtesy of Willis O'Brien (who would go on to bring King Kong to life). I love stop motion and I've never seen this one, making it a perfect way to start the marathon. It will be fun to see how far practical monster effects progress in the span of a day. 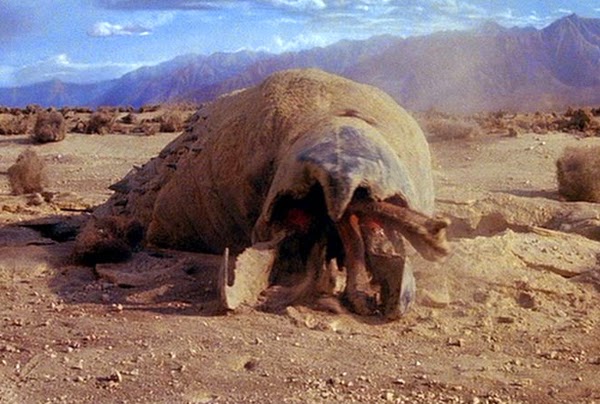 Just in case The Lost World is a bust (like I said, I've never seen it, and at nearly two hours it may overstay its welcome), I'd like to program this one here as an insurance policy. Few '90s horror movies are more FUN than Tremors, a movie that knows exactly what it is and becomes a kind of masterpiece of its own subgenre. Every actor in the movie is so great and having such a good time that it's impossible to choose a favorite performance, and the creature effects by Tom Woodruff, Jr. and Alec Gillis are first rate. I don't know anyone that doesn't love Tremors. I wouldn't want to, either. 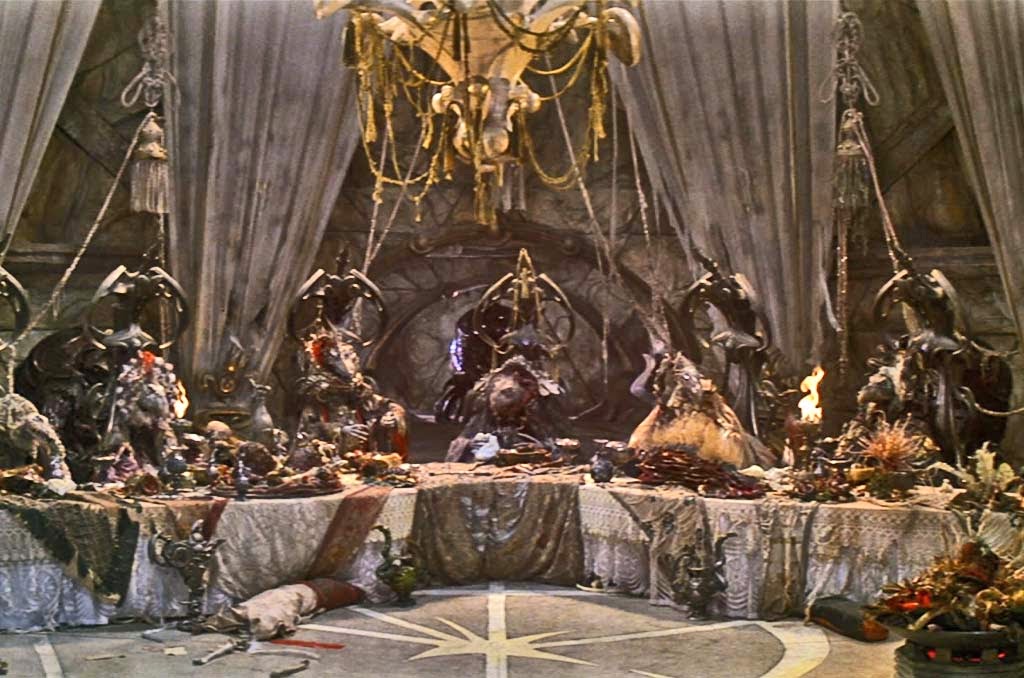 I've said it before in past marathon columns that one of the challenges of programming 24 hours of movies built around a single theme is finding a way to make sure that the movies don't all feel the same. With a theme like "creature features," that's particularly difficult, as it's traditionally horror movies that fit that bill. So to break things up a little, let's watch Jim Henson's wonderful, bizarre fantasy epic that's wall-to-wall puppets and creatures -- not a single human actor in sight. Revisiting the movie for F This Movie Fest a few years ago revealed it to be slower than I remember it being, so I'm putting it early in the hopes that we don't fall asleep at any point. Even if I didn't genuinely like The Dark Crystal -- and I do -- I would forever admire its technical merits and ambition. There is such imagination on display, such gorgeous design work and incredible world building that I don't mind so much when the story suffers a little in comparison. 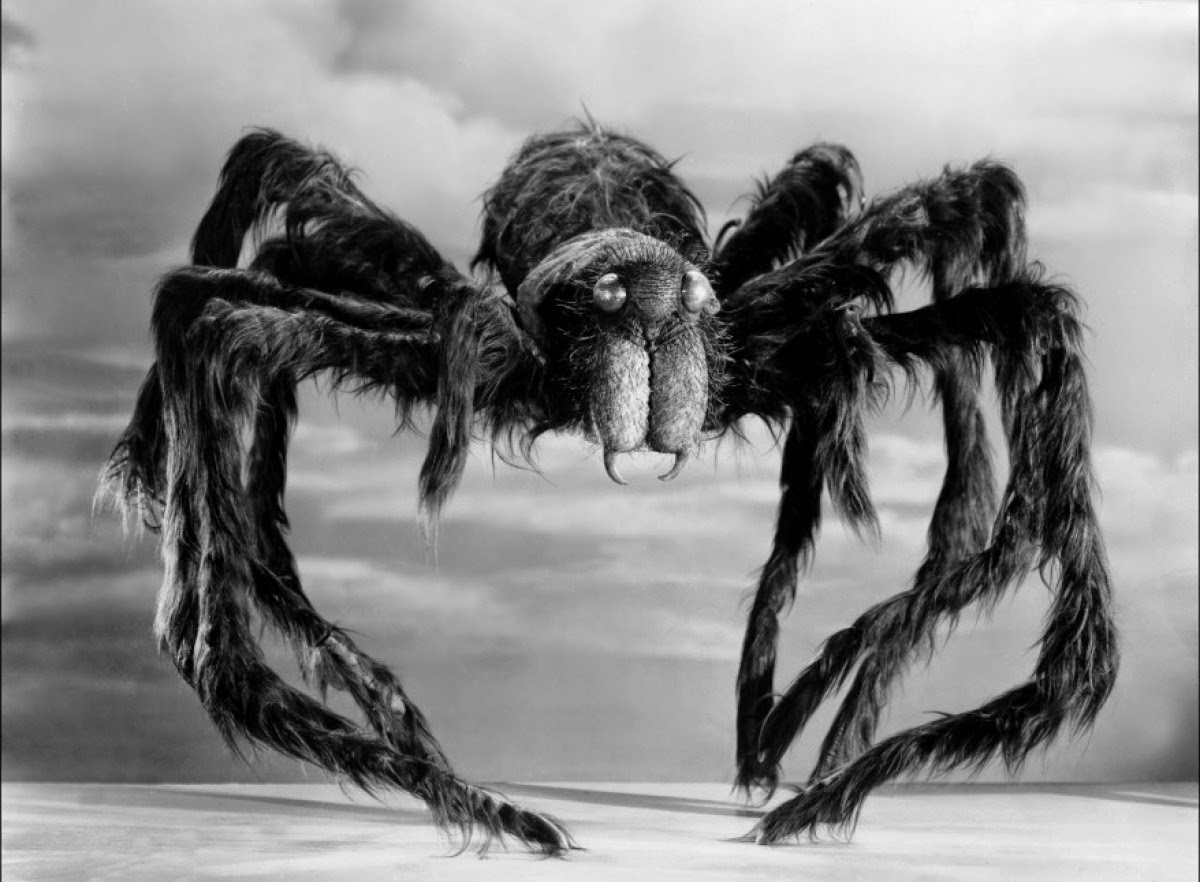 Aaaaaah! Spiders are horrible, and giant hairy spiders are the worst. From the decade of enormous atomic monsters comes this better-than-it-should-be entry directed by Jack Arnold. It takes a long time for the monster to show up (a lot of the movie is spent on mutated caveman-looking dudes), but it's worth the wait. 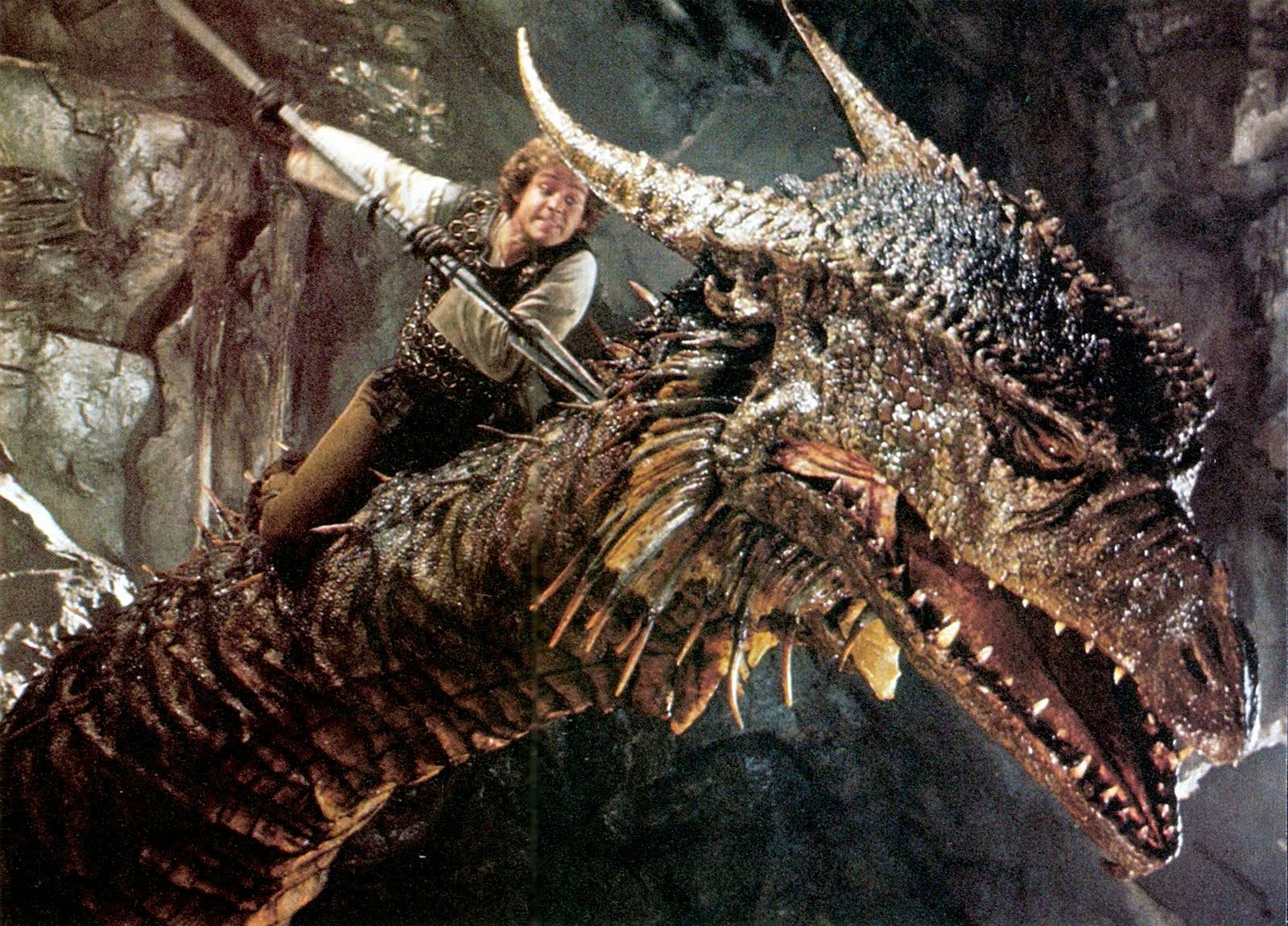 When not horror movies, the only kinds of movies that tend to feature practical creatures are science fiction and fantasy. I'm not complaining, of course, as those are all kinds of movies that I love, but it does mean this marathon is going to be very genre-heavy. This underrated fantasy adventure from '81 is violent and scary  -- and from Walt Disney, no less! -- and features the best dragon ever put on film. Of all the movies programmed in this marathon, this is the one I'm most excited about revisiting. Where is the Blu-ray already? I want to see Vermithrax in HD. 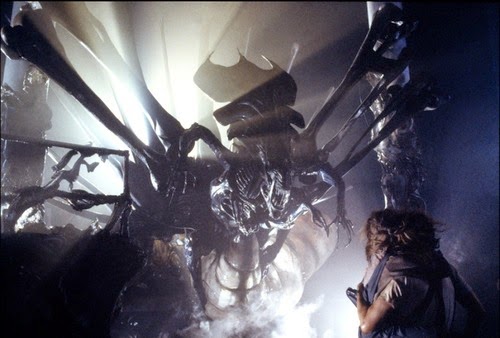 I had originally planned to put John Carpenter's The Thing in this slot, as it has arguably the best practical creature effects of all time. But I'm saving that for another hypothetical marathon coming later this week, so instead let's use the primetime slot to revisit James Cameron's brilliant follow-up to Alien. Ridley Scott's movie could be programmed here, too, but it's a little quiet and much more deliberately paced. When watching 24 hours' worth of movies, it's important that they move. Aliens moves. Plus it's got a bunch of creatures instead of just one (though part of the special genius of the film is that only a few puppets were actually used, made to look like dozens). This is such a relentless and exhausting movie that it will send us into the overnight portion feeling sufficiently drained. This way we can just let the weirdness to come wash over us. 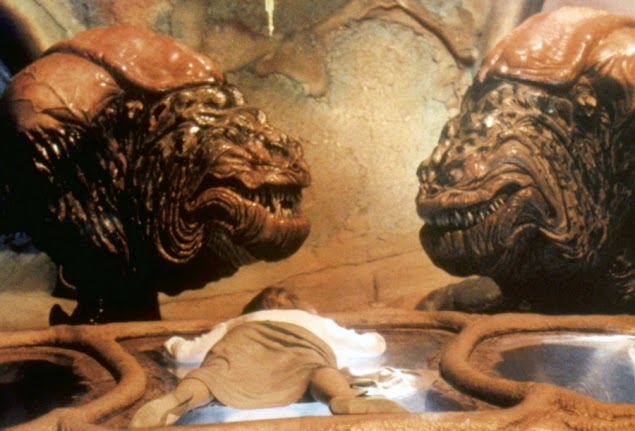 Speaking of weirdness. It is no secret that I unapologetically love Tobe Hooper, who I feel safe naming as one of my favorite filmmakers (especially as it pertains to horror). His films made for Cannon during the '80s (what I have affectionately dubbed his "cocaine trilogy") are among my favorite of his, and though his remake of Invaders from Mars doesn't get much respect I think it's a really fun, really misunderstood movie. The giant creatures designed by Stan Winston Studios are enormous and silly, just like the film in which they appear. They alone make Invaders from Mars worth seeing, but it's got more going on than just that. This is, by his own admission, Tobe Hooper's "kids' movie." Who wouldn't want to see that? Programming this will give me a chance to spin Scream Factory's new Blu-ray, which I'm hoping will help win the movie some new fans and kickstart a reassessment that's overdue. 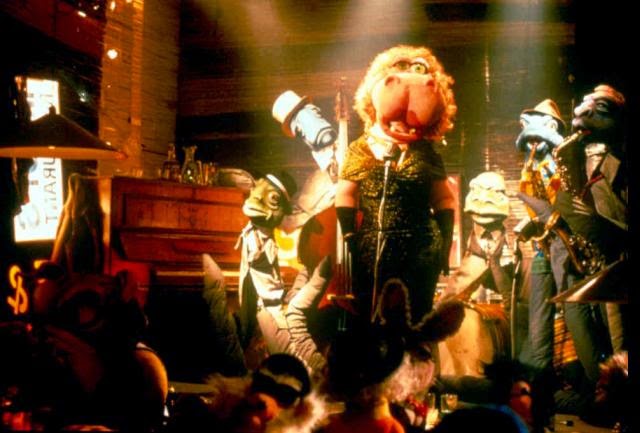 Here's a movie that can really only be watched at midnight. One of Peter Jackson's earliest movies is a dark, foul and nasty take on The Muppets, going behind the scenes at an all-puppet variety show where the characters cheat on one another, do drugs and eventually commit murder. It can be exhausting and unpleasant, but also weird and funny. It's the kind of movie that you watch and convince yourself that you're having a fucked up dream, so it's perfect for this slot. 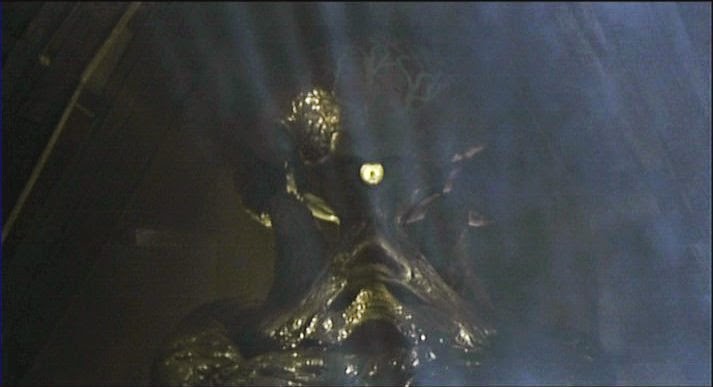 My unwritten rule about programming these marathons is that the 2 a.m. spot (or very near there) is given over to Italian horror. That's hard to do for a "creature feature" theme, as the Italians didn't really do a lot of monster movies. Slashers, yes. Zombies? Boy did they ever. But not a lot of monsters. One exception is Luigi Cozzi's goopy, ugly and mean-spirited Alien rip-off Contamination, a movie I don't love but fits the bill. There is, in fact, a giant monster (seen above). It is a disappointment. 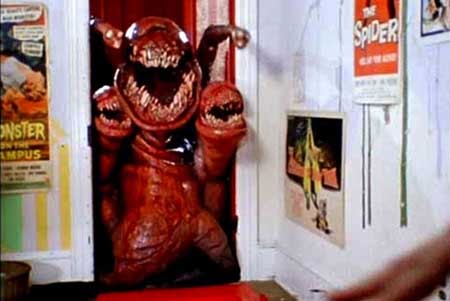 Better than Contamination is The Deadly Spawn, a scuzzy and low-rent monster movie from the early '80s. It has a homemade vibe and a really cool monster, even if it is borrowed from Alien and Little Shop of Horrors. There is a gag with a disembodied hand that we've seen a thousand times, but never better than it's done here. Both the shoot and the post-production were very difficult and left a lot of bad feelings for those involved, and it shows in the messiness of the movie. Still, it's a ton of fun and has a cool creature. You could do a whole lot worse at 4 in the morning. 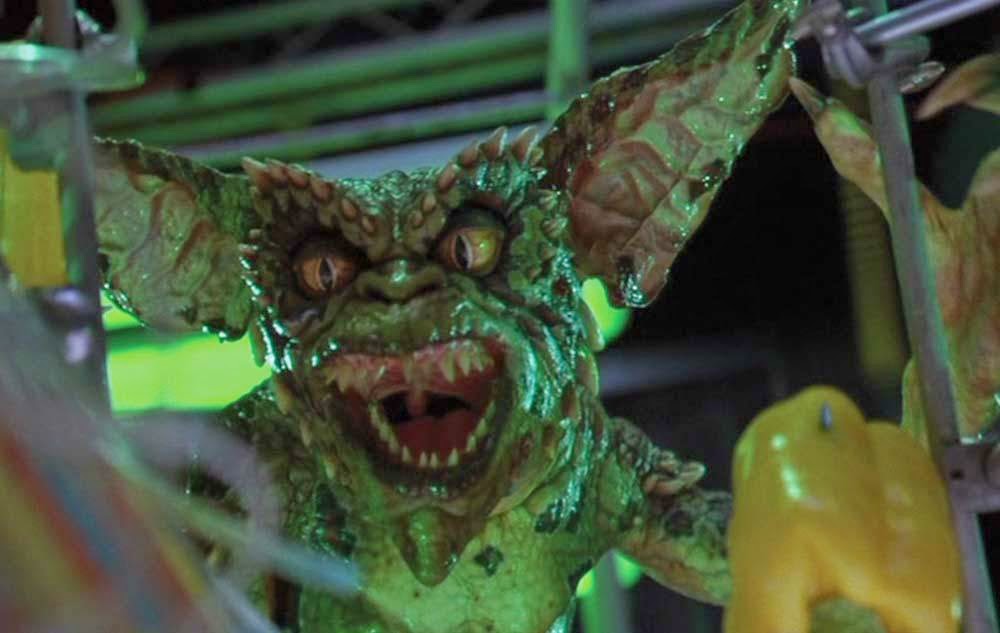 If this one doesn't bring your energy back, no movie will. Joe Dante's brilliant, anarchic follow-up to his biggest commercial success is an insane cartoon of a movie and a commentary not just on Gremlins (Lincoln's birthday!) but on the very idea of sequels. It's a satire of corporate America, a love letter to monster movies and a movie that no studio would ever have agreed to make had Warner Bros. not mistakenly given Dante carte blanche to make any movie he wanted as long as it was a sequel to Gremlins. The practical gremlin effects are even better this time around, offering dozens of the slimy green creatures and several new "species" thanks to DNA experimentation at the hands of Christopher Lee's Dr. Catheter. It's a shot of pure, unfiltered Joe Dante injected straight into the brain. 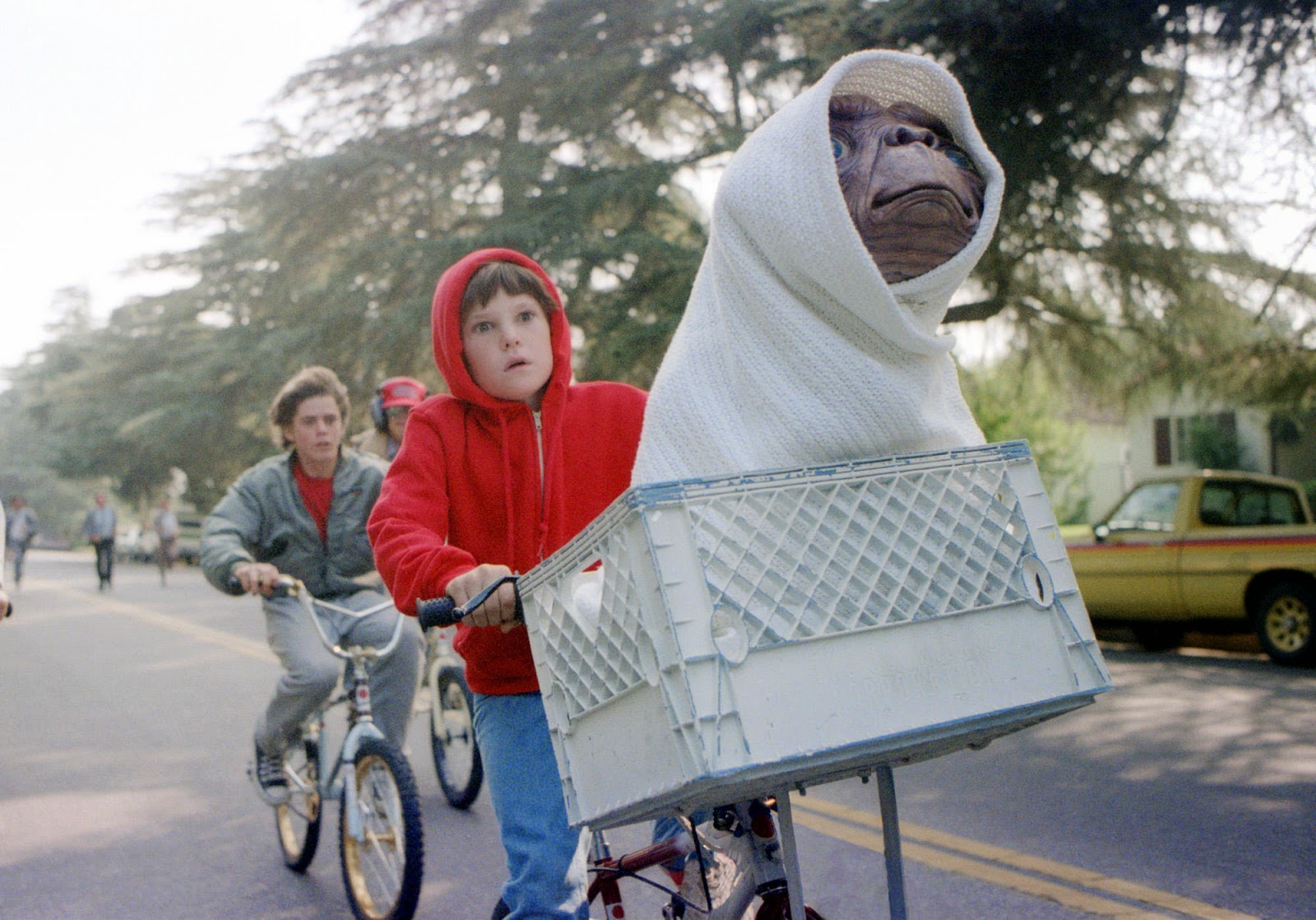 For some reason I like to end a lot of these marathons as a giant weeping mess. E.T. will get the job done. Whereas the creatures in most of these movies have been of the monster/killer alien variety, it will be nice to end the 24 hours with a creature who just wants to study plants and teach us how to love. I went years without seeing E.T. and convinced myself that it wasn't as special to me as I once thought. I was so wrong. Just thinking about the look on Henry Thomas' tear-stained face as he says goodbye to his best friend is enough to shut me down for the rest of the day. After a full day and night of pure rubber and latex insanity, it will be great to wrap things up with a movie that's all about how it makes us feel. I can think of no better special effect than that.
Posted by Patrick Bromley at 2:00 PM